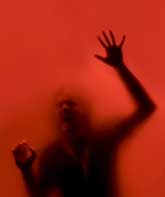 (Post-exertional malaise (PEM) is most likely the key symptom in ME/CFS. The realization that PEM (or a marked exacerbation of symptoms after exertion) may be unique to ME/CFS and needs to be closely examined finally hit home after the repeat exercise studies by the Pacific Fatigue Lab at the University of the Pacific (funded by the CAA) showed strange metabolic abnormalities after exercise. Now many research studies push ME/CFS patients into a PEM-like state in order to better understand the processes at play in ME/CFS. This is a topic we vitally need to know more and this should be a very interesting series of articles. Thanks to Jenny and the CFIDS Association for allowing us to repost it here. You can find the original article here. )

Muscle wilting meltdown, air gulping short of oxygen feeling, brain blood vessels flayed on a laundry line in the wind, metal rods in the back of head . . . someone crushing your ribcage, limbs giving out, mesh bag constricting head, ‘pingers’: those first small headaches that warn of bigger headaches, ‘back of head clamp’ headache, increased gravity feeling, being pushed backward into bed, temple-to-temple headache, weak arms as if bound down by stretchy ropes, eyes and brain blanking with a kind of pulse through the head . . . Harm and damage often come from these collapses, though on the outside they may look like ‘malaise.’
– Patient, speaking anonymously

A 2009 survey of more than 1,000 patients conducted by the CFIDS Association of America found that post-exertional malaise (PEM)1 is one of the most common and most severe symptoms reported by individuals with chronic fatigue syndrome (CFS)2. This article, the first in a series, examines the definition of PEM and how CFS patients experience it. PEM is also referred to as post-exertional relapse and post-exertional fatigue.


How is post-exertional malaise defined?

Standard medical dictionaries define malaise as “a feeling of general discomfort or uneasiness, an out-of-sorts feeling.”3 This bland description bears little resemblance to the severity of PEM in CFS. It is not clear who first coined the term or applied it to CFS. Early definitions of the illness do not use the phrase, but they do describe something like it.


The 1988 Holmes4 criteria for CFS included the symptom of “prolonged (24 hours or greater) generalized fatigue after levels of exercise that would have been easily tolerated in the patient’s premorbid state.” The Oxford criteria5 from 1991 said only that fatigue and myalgia (muscle pain) “should be disproportionate to exertion.” Neither Holmes nor Oxford required PEM for diagnosis of CFS. The 1994 Fukuda criteria6 was the first to explicitly include the symptom of “postexertional malaise lasting more than 24 hours,” but still did not require it in order to make a diagnosis of CFS.


The 2003 Canadian Consensus Definition7 was the first to define PEM in detail, and the first to require PEM for the diagnosis of ME/CFS:

Post-Exertional Malaise and/or Fatigue: There is an inappropriate loss of physical and mental stamina, rapid muscular and cognitive fatigability, post-exertional malaise and/or fatigue and/or pain and a tendency for other associated symptoms within the patient’s cluster of symptoms to worsen. There is a pathologically slow recovery period–usually 24 hours or longer.8

How does post-exertional malaise feel?

PEM is not just a feeling of severe fatigue; it is a full-body assault. A physician with CFS says, “My PEM feels like a worsening of my baseline CFS symptoms – more fatigue, headaches, neck/back muscle achiness (but not outright pain), problems concentrating/reading. My insomnia also sometimes increases temporarily and at its worse, my throat hurts and my lymph nodes feel more tender.” Andrew, a person with CFS (PWC) says, “I can’t focus enough to watch TV. Conversation becomes difficult. Any kind of stimulation feels like an assault on my senses.”


The use of the word “exertion” may create the impression that PEM is triggered by strenuous or intense activity, but this is not the case. Patient Sue Jackson says that “Any kind of exertion . . . can leave me, a few hours later, suddenly feeling as if I have a terrible flu.” Some patients need only attempt to make a simple meal or get dressed before PEM descends. Cognitive or emotional effort can also cause PEM. For Andrew, it takes very little to bring on PEM, such as “itting at the computer too long a few days in a row. It seems like not enough bed time and too much activity time can cause it.”


The amount of activity that triggers PEM varies from patient to patient, or even for one patient on different days. “The safety zone moves around,” says another physician with CFS. It is very common for the onset of PEM to occur a day or more after the triggering activity, but sometimes it can happen immediately. A patient may be able to drive to a doctor appointment, but sudden PEM might make it impossible to drive home. Without clear and predictable boundaries to define tolerated activity levels, patients are forced to navigate with trial and error.


The cost of error is very high. As described by one patient, “It feels like somebody flips a switch and every sense of well-being disappears. I have to go lie down, and then I still feel like I have to go lie down! There is no relief.” PEM may last as short as 24 hours, but recovery can take days, weeks or even months. Andrew has found “the more I stress my body this way, the longer the exacerbation lasts.” He notes that recovery from PEM only means returning to baseline, and “I don’t even feel that well before exertion.”


There is no formula for PEM. Patients cannot reliably predict what activities will bring it on, and the duration of recovery does not always correlate to the level of effort that caused it. Ms. Jackson speaks for many patients when she says, “PEM is the worst part of CFS for me.”


This is the first in a series of articles about post-exertional malaise. Coming next: What has research documented about PEM?