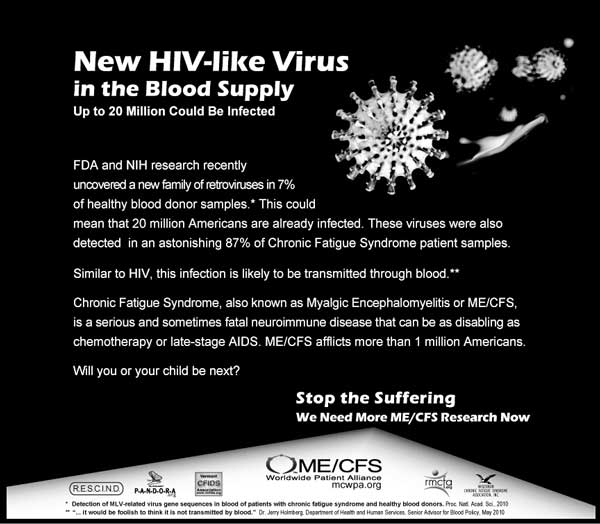 The MWPCA’s press release charting how the ad came about, the need for research, XMRV and Annette Whittemore noting that the NIAID has rejected six grant proposals from the WPI. P.A.N.D.O.R.A. Inc., Rocky Mountain CFS/ME and FM Association, Vermont CFIDS Association, Inc., Wisconsin ME/CFS Association, Inc. and R.E.S.C.I.N.D. and many patients donated money to produce the Ad.

out the Ad here and, above all, send emails, faxes etc to your Cong


Quote:
-Possible New HIV-like Retrovirus in Blood Supply–
CORAL GABLES, Fla., Dec. 6, 2010 /PRNewswire-USNewswire/ — In an unprecedented move, chronic fatigue syndrome (CFS) patients published a half-page ad in The Washington Post today. The ad brings attention to new, HIV-like retroviruses, including XMRV, which have been linked to CFS and aggressive prostate cancer, and have been detected in healthy blood donors.

The ad was created through the ME/CFS Worldwide Patient Alliance (MCWPA), a grassroots patient collaboration formed in August 2010 with the support of P.A.N.D.O.R.A., Inc. From their beds and wheelchairs, patients spent decades watching researchers, scientists and physicians debate about the cause or nature of their illness. Now, they are adding their voice through a campaign that calls for biomedical research funding, fast-track treatment options and improved patient quality of life. CFS, also known as myalgic encephalomyelitis or ME/CFS, is a disabling, sometimes fatal NeuroEndocrineImmune disease that afflicts more than one million Americans and an estimated l7 million people worldwide.
(Photo: https://photos.prnewswire.com/prnh/20101206/DC12334 )

ME/CFS first gained national attention amidst the AIDS epidemic in the early 1980s. As early as 1991, a retroviral link to ME/CFS was discovered by Dr. Elaine DeFreitas of the Wistar Institute, but subsequent retroviral research was halted by the government. Although more than 4,000 peer-reviewed articles in medical journals have pointed to system-wide immune, neurological, endocrine, gastro-intestinal and cardiac abnormalities, a biologically-based diagnostic definition has eluded doctors. The result has been a catastrophic lack of care, ineffective (sometimes harmful) treatments and a shorter life span for those who are ill. The leading causes of death among patients are heart disease, cancer and suicide. The disease occurs in people of all ages, from children to seniors, and also has a higher incidence rate in families and has occurred in cluster outbreaks.

“This can happen to anyone,” said Sita G. Harrison, spokeswoman for the MCWPA. “ME/CFS is devastating and the lack of care has hurt us all. We ask the government and health care agencies that we put our trust in to help the millions of people who are suffering and to fund more research now.”

A major scientific breakthrough occurred in October 2009 when the Whittemore Peterson Institute (WPI) at the University of Nevada, Reno, working with the National Cancer Institute and Cleveland Clinic, published the results of a landmark study. The seminal study, published in the leading scientific journal, Science, discovered the third human retrovirus, XMRV, in the blood of 67% of ME/CFS patients and in 3.7% of healthy controls. This suggests that up to 10 million US citizens could already be infected. This finding was later confirmed by the FDA, NIH and Harvard Medical School in a study published in the Proceedings of the National Academy of Sciences. Their results linked a family of human gamma retroviruses (to which XMRV belongs) to ME/CFS at a rate of 86.5% and 6.8% in the healthy population, bringing the total of Americans who may be infected up to 20 million people.

“The NIAID, the national institute responsible for infectious disease research, has yet to fund XMRV research in ME/CFS or any other disease,” explains Annette Whittemore, President of WPI. “WPI has had its last six XMRV-related grant proposals turned down; despite the fact that our researchers have proven XMRV is transmissible and infectious.”

MCWPA is advocating for a budget that is in line with other NeuroEndocrineImmune diseases. Currently, only $5 million for ME/CFS research is in the NIH budget, far less than similar diseases such as multiple sclerosis ($l44 million) and lupus ($121 million). Patients also ask for antiretroviral and Ampligen clinical trials that have shown great promise in mitigating the effects of ME/CFS.

For more information, to donate, or for more resources and spokespeople, including leading researchers, scientists, physicians, patients, and historians please visit https://mcwpa.org/.

About MCWPA: Our mission is to create an effective, cutting-edge advertising campaign addressing the poor quality of life of individuals with ME/CFS. By issuing a collective and unified statement, our community will no longer be silent and invisible. The MCWPA ad campaign is supported by P.A.N.D.O.R.A. Inc.™, Vermont CFIDS Association, Inc., R.E.S.C.I.N.D., Rocky Mountain CFS/ME and FM Association and the Wisconsin ME/CFS Association, Inc.