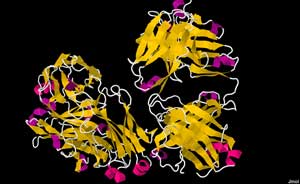 Developed by IDEC Pharmaceuticals, Rituximab is the first of a new class of drugs called B-cell depleting monoclonal antibodies. Approved by the U.S. Food and Drug Administration in 1997 for B cell non-Hodgkins lymphoma patients who were resistant to other chemotherapy regimens Rituximab is now part of the standard therapeutic protocol for many B cell lymphomas. It is also used to treat leukemia, myelomas and many autoimmune disorders including Rheumatoid arthritis, autoimmune hemolytic anemia, vasculitis (for example Wegener’s Granulomatosis), type 1 diabetes mellitus, Sjogren’s syndrome and several others.

Rituximab is co-marketed by Biogen Idec and Genentech in the U.S. and by Roche in Canada (under the trade name Rituxan) and the European Union. Its success in several diseases opened up a new field of drug development with several B-cell depleting monoclonal antibody drugs being produced or now under development. Rituximab will be coming off patient protection in the next year. Idec is reportedly producing a version of the drug that can administered subcutaneously.

Rituximab May Be Useful in Chronic Fatigue Syndrome (ME/CFS) ….

for several reasons…While autoimmunity has been little studied in ME/CFS many aspects of the disorder (gender imbalance, infectious and stress triggers, genetic susceptibility, improved symptoms during pregnancy, etc.) suggest it may have an autoimmune component and Rituximab, of course, is often used to treat autoimmune disorders.

Herpesviruses —Rituximab could be killing off herpesviruses present in the B-cells of patients with CFS.  Herpesviruses infect B-cells and replicate in great numbers during B cell transformation. Killing B-cells before they get ‘transformed’ or activated could reduce or even cause a herpesvirus infection to die out as the B-cells they have infected die over time.

In an interview with Jorgen Jelstad Dr. Klimas noted

“When we’re done with our EBV, when you and I had our mono, we are left with roughly one million latent EBV-infected cells. And our immune system handles that. One of the questions that have never been answered in chronic fatigue syndrome patients is, do they have a bigger reservoir than that? Was their primary infection so intense that they have ten million or a hundred million latently infected cells? Because there’s going to be a threshold where a normal immune system can’t contain latency – and can’t maintain that virus under control. (…) Maybe Rituximab simply knocked down the reservoir so intensely so that we got it down under the threshold, and then the immune system could handle it. And that would make sense to me, Klimas said. She stressed that this is just a hypothetical construct without data to back it up”

Dr. Marcia Blackman is currently determining whether a B-cell depleting antibody can ‘lower the latent load’ of herpesviruses or even completely cleanse the system of herpesvirus infected cells.

I’m basically looking for an aberration in the immune system in response to pathogens. My specialty is infectious disease – what infections trigger that abnormal immune response? And I think there is a component of autoimmunity based on the fact that it’s most common in women and many patients get better during pregnancy and often gets worse after birth. And researchers have found autoantibodies in patients with CFS. So I’m expecting an autoimmune component.

Two small studies by Norwegian researchers Fluge and Mella, a case control series in 2009 and a placebo-controlled double-blinded study in 2011 have been published. Fluge and Mella initiated the studies after they noticed that the CFS symptoms of several lymphoma patients with chronic fatigue syndrome became markedly reduced when they went on the chemotherapeutic drug.

The study results were impressive; about 40% of patients did not respond to the drug but 60% did with a few patients apparently resolving all their symptoms and others improving significantly. The effects, however, were also mostly transient, with the symptoms returning after the drug’s effectiveness wore off. The same curious delayed-response pattern seen in the first study – with symptom improvement occurring 2-7 months after the injections.

The responses in their latest study have ranged from slight to moderate to  major with ‘quite a few’ major responses – and some people completely recovering (at least temporarily.  In an attempt to avoid the relapses that occurred after going off the drug in the past some patients are staying on the drug for long periods of time). Fluge and Mella were also beginning a small trial focused on severely ill patients.

Much larger studies are needed. The Norwegian government has reportedly contributed $350,000 to a larger, more comprehensive study.   At the Invest in ME Conference in May, 2012,  Dr. Andreas Kogelnik of the Open Medicine Institute reported the OMI had begun an off-label trial of Rituximab in CFS.  PHANU in Australia is reportedly pursuing a Rituximab study as well.

“I have not seen results like this in any medical study in the 25 years that I have been in this field. These are extraordinary results. This is the first treatment that convinces me there is a potential therapy that can help people to recover after they’ve been sick for more than 5 years”  Dr. David Bell

Dr. Bell believes Rituximab is potentially the most exciting treatment option he’s seen in 25 years.  Dr. Klimas and Dr. Bateman all responded to emails asking their thoughts and all responded similarly; they were excited by the results, concerned about the ability of many patients to pay for the drug and they all wanted more data, in particular, more studies. Dr. Bateman hoped to help enroll patients in a clinical trial of the drug:

“In short, I think the news is very exciting. I have personally observed the phenomenon of CFS patients improving after chemotherapy. I look forward to and anticipate speedy progress toward a US clinical trial designed specifically to facilitate an FDA indication, should the findings be replicated.
My primary goal will be to help enroll well defined patients in such a clinical trial of rituximab, if possible, rather than to start using it for treatment right away. I don’t have enough information yet to know what my position will be on off label use. It will be important to identify our best available biomarkers with which to identify appropriate patients and to assess treatment outcomes.
The biggest concerns are cost, appropriate patient selection and understanding the risks in the CFS population.

In a statement to the Norwegian Press, Dr. Klimas emphasized the different ways Rituximab may be working and called for more study into the infections that may be occurring in ME/CFS:

Many clinicians fail to realize the severity of the illness that has been termed ME/CFS. This is a profoundly ill population, the severity of illness scores are similar to congestive heart failure and severe rheumatic disorders such as rheumatoid arthritis. If a medication like Rituximab is found to be effective in validation studies, the risk/benefit ratio would justify its use in very ill ME/CFS patients. I hope that phase II/III trials can be initiated as soon as possible.

The recent study of Drs. Øystein Fluge and Olav Mella demonstrating significant improvement in ME/CFS patients treated with the B cell depleting agent Rituximab is a key study for our field. By showing that depleting B cells can cause dramatic improvement, the investigators point the field in the direction of autoimmunity, and autoimmunity caused by an autoantibody.

However, there is one other plausible explanation: that the B cells were acting as a reservoir of infection and by depleting the B cell line the viral load can be brought down to the point of suppression by the immune system. Because EBV infection is harbored by B cells, as are several other putative latent viruses that could contribute to illness persistence, I believe both of these theories deserve vigorous scientific pursuit.”

Rituximab is an expensive drug costing from $6-10,000 a year or more depending on how many times it is infused. Since it will surely take numerous validation trials for insurance companies to pay for Rituximab treatment in CFS the only options at this point appear to be self-pay or to get enrolled in a clinical trial. (Because of the need to take samples throughout the course of their studies, the Fluge/Mella studies are only accepting patients who live in the general area).  Drug discounts are available, however, for those with lower incomes.

About five percent of patients in several trials developed ‘serious’ infections although a broad overview of numerous Rituximab cancer studies did not reveal an incidence of increased infection. Several confounding factors including the use of other immunosuppressant drugs have made it difficult to pin down the role Rituximab plays. None of these serious side effects have shown up in the two Fluge/Mella studies.

PNL – The increased risk of one rare but life threatening infection called progressive multifocal leucoencephalopathy (PNL) lead the FDA to place a ‘black box’ warning on the drug. PNL is a rapidly progressive and often fatal neurological disorder triggered by the reactivation of the JC Virus (JCV) in the brain. Because of many other confounding factors that may influence the development of PNL, a causal relationship between Rituximab and PNL has not been established.