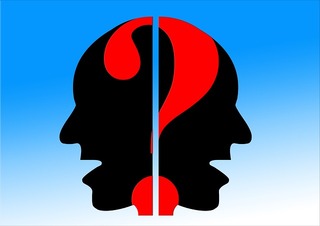 If there is one thing that is sure to get ME/CFS sufferers riled up, it is the name of our disease.

The very fact that two names are attached to each other, janus-like, almost as if mocking one another seems emblematic of all the controversy surrounding the illness.

If only we could just sort out the name, perhaps everything else would fall into place.

For how can anyone trust a condition with such a slippery, inconclusive title?

Dr. Derek Enlander suggested that we could re-name the illness ‘Ramsay’s disease’ in the grand tradition of calling diseases after the people who first documented them.

The advantage of this is that we get rid of the ‘two conditions in one’ label which is confusing for both sufferers and anyone trying to understand the illness.’Ramsay’s disease’ sounds as if it belongs to the canon of other serious illnesses.It would move our illness away from the realm of a syndrome (who takes a syndrome seriously?) and give it some respectability.

And this would have an impact on the everyday life of the sufferer. The term ‘ME/CFS’ is so polluted, so discredited, that we might feel less embarrassed, less stigmatised to tell people we had ‘Ramsay’s disease.’


Dr. Enlander mooted that semantics were not as important as diagnosis and treatments and of course he is right; but still, the words that are used to describe something remain extremely important for the people to whom they apply as they construct and define our reality.This is why language that has been used against certain other discriminated and marginalised groups has been hotly disputed over the years, changed, outlawed and sometimes re-appropriated by the groups in question.

Words and language are symbols. They are the building blocks of a society, they not only reflect, they perpetuate and create.

But would a change of name really solve anything?

The problem with the ME/CFS label is that no one knows within that entity to whom one is referring.

Some sufferers say that ME is the only ‘real’ condition. That CFS is the milder version or ME Lite or even something completely different. This might be an affront to many but it is an argument raging in our community.

Again the name creates tension and resentments and, worse, uncertainty and disbelief both within and outside the ME world.

Others feel that ME/CFS are the same entity – so why have both? Can’t we just plump for the one?

People who were diagnosed in the early to late 1980’s were labelled with neither.

In the UK we had PVS (post-viral fatigue syndrome) and in the US, CFIDS was popular (chronic fatigue immune dysfunction syndrome).

Were these labels any better that what we have now?

Possibly. PVS did describe something of what was happening in that most people started off with a virus and never recovered. The problem was that what we were experiencing was not ‘fatigue’ in any previously known sense of the word.

The extreme exhaustion after the most minimal effort was entirely new and out of the ordinary.

CFIDS also was good in one way because something, surely, had happened to our immune system – even if there were no longer traces of it that could be picked up by a blood test. But again, it didn’t quite describe for sure what the illness was.

Then these two vintage labels slowly but surely – and most often without our permission – transmogrified in our medical notes into the dreaded ME/CFS.

The main point of contention for sufferers however is that the label ME/CFS – and calling the disease by another name cannot help with this – contains disparate illness groups within it.

Who knows who is suffering what? Again, often bitter argument arises over this issue.

The term ‘chronic fatigue’ is offensive to many for the reason previously stated: the extreme and abnormal exhaustion one feels with this illness is so out of this world, so unrelated to any condition one might have experienced before, that to describe it as fatigue is an insult.


‘Chronic fatigue’ diminishes and therefore undermines the credibility of the serious nature of the disease.

Yet, evidently some sufferers of ME/CFS are not experiencing this major extreme exhaustion but have ‘mild’ fatigue.

And others are given the same label and are bedridden for fifteen years unable to read, watch TV, speak, feed themselves or go to the bathroom.

Yes, other conditions such as MS have patients with widely differing symptoms but they know what their disease is. The varying severity of MS sufferers is to do with how far the disease has progressed and if they have the remitting or aggressive form.

With ME/CFS – though sufferers are tormented with many other symptoms – the core and most disabling symptom is the extreme exhaustion. And how, some people may ask, can you have mild ‘extreme exhaustion’?

I think we all know now that doctors are using the ME/CFS label for anyone with any kind of persistent fatigue which further dilutes the medical and public perception of our disease.

This is serious. Having a nebulous, untrusted, untrustworthy name has a solid impact on research.

And without research we can expect no progress with either diagnostic techniques or treatments.

And without a diagnostic test to separate who is suffering from what, we are trapped with the incongruent name that serves us ill.

And not even ‘Ramsay’s disease’ can solve this for us.