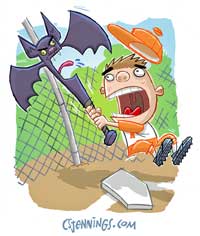 Dr. McClure has been publicly pretty clear that she believes XMRV is not present in ME/CFS. Last week she hinted about an article soon to come out that will explain just how contamination caused XMRV to pop up in ME/CFS patients. Now to her credit she and her Imperial College retrovirologists have put their pen where her mouth has been (what an image!) and pitched the Alter/Lo team their best hard balls – in the letter column of the PNAS journal, for all to see.

One debate standard is to never ask a question whose answer you might not be able to handle. Did the Imperial College retro’s lob the Alter/Lo team a bunch of soft high one’s that they were able to blast out of the park? Or did they pitch them some nasty, inside fast balls that they had to back away from?

Let’s have some fun and try and try and call this transcontinental baseball game between these two retroviral groups.

Batter #1: That Contaminated Invitrogen Assay – The Brits Pitch – The Alter/Lo team used an enzyme from Invitrogen in their primer (called platinum Taq polymerase) that contains mouse monticlonal antibodies which can contain traces of mouse DNA, which, of course, means possibly XMRV. In fact, they point out that several labs have reported that when tried to amplify XMRV sequences using this primer they picked up contamination from mouse DNA. (Ouch!)

But! This contamination problem is well known and has been discussed since the publication of the Science paper. Erlwein et. al. the samples were contaminated XMRV should have shown up in the healthy controls as well – which, of course, it didn’t.

Case closed? No, the analyses suggest that Alter/Lo did not run the healthy controls and ME/CFS samples on the ‘same primer sites’ something that Erlwein et al acknowledge may be a ‘trivial’ concern but is nonetheless not ‘standard’. (???) Connecting this to the primer contamination seemed a bit remote (some innuendo was no doubt intended) and the authors didn’t really try. Still, what about those contaminated Invitrogen primers?

The Yanks Swing – Alter/Lo replied they were well aware that one catalog number (12574-030) of the Invitrogen Assay had come into question which lead them to use a different one (10966-034). (Which brings into question just how many catalog numbers one assay can have???) They noted, again, that none of the 300-healthy controls tested positive but that they also further tested the assay itself for mouse mitochondrial DNA in order to insure that their primers were clear. In the end they provided three reasons why their Invitrogen assay was clean. As to the different primer runs for the healthy controls and ME/CFS samples both were carried out using the same external and internal primer sets.

Laymen’s score – Hopefully for Brit fans this was just a warmup…..An easy score for Alter/Lo team

The Swing – yes, the nonspecific bands were present but they didn’t come from a contaminant – they came from bits of human DNA the primer amplified. How did they know that? Because they pointed out (again , they noted) that they sequenced every single one of the bands that applied – thus they knew conclusively what they were. (This was in the paper).

Laymen’s Score- A Triple – Gently directing the Brits to please read the paper again suggested Alter/Lo were floated a high, soft one that they bounced off the deep right field wall.

The Swing – This pitch seemed to have some juice – a slider that dropped viciously at the last moment. How could the two positive studies have such different findings?

The Yanks crouched and swung –a foul tip. First they noted that- MLV’s might be the dominant species in a small number of cases – which made sense given that theirs was such a small study but doesn’t seem likely for several reasons.

The next swing connected. It could be -as Dr. Ruscetti work suggests – that XMRV itself is much more variable than believed and that the gag sequence everyone is looking at contains many polytropic-like sequences.

(This appears to be the “it’s XMRV after all!” scenario in which Alter/Lo actually did find XMRV but it was more variable than expected which lead it to become falsely identified as a polytropic MLV; this appears to be Dr. Mikovits explanation – and she may very well know given the hundreds of samples the WPI has).

Laymen’s Call – not conclusive but a good explanation – a double past the outstretched glove of the second baseman. One man scores – two runs in.

Batter #4: Missing MLV or Mistaking It? The Brits Pitch – Why was the Imperial College and the CDC teams unable to detect MLV’s using generic primers that should have been able to pick them up?

The Swing – The Yanks stepped out of the box on this one and gave no answer – perhaps not desiring to answer a question no one knows the answer to.

Laymen’s Score – the Brits pitched a high and hard one – an unanswerable question, at this point, perhaps prompting the other dugout to scramble out onto the field in protest. Nevertheless, one out for the Yanks for not answering.

Batter #5: Past the Limits of Detection – The Brits Pitch – How were both the WPI and Alter/Lo able to pick up such a high percentage of positive samples during the first pass of the PCR when XMRV/MLV is supposed to be such a rare virus? Given the stated detection limits of their assay their ability to find such a high percentage of MLV positive samples would suggest that MLV’s were found in one in every 50-80 cells – a higher percentage found even in HIV/AIDS. Yet no one to this point has ever been able to isolate MLV’s in humans. How could this many MLV’s be present in humans?

The Swing – Alter/Lo – ever so politely appeared suggest that either their paper had been misread, wasn’t read fully ,and/or the opposing team needed to go back and redo their PCR 101 class. Yes, it was true that their assay was 100% accurate when 100 copies of MLV’s were present but that same assay was also 60% accurate when only 60 copies were present. In fact a test run indicated it was able to pick as few as 5 copies of XMRV accurately. Plus, in the discussion section they stated their results indicated that one XMRV was present in from 1-400 to 4,000 cells – nowhere near the 1/50-80 cells ratio the IC researchers posited was apparent. To make matters worse Alter/Lo reported that they can find antibodies in most of the PCR positive samples not in most PCR negative samples; ie they have backup now.

Laymen’s Call – Talk about a soft high across the middle of the plate. Taking the Brits to task for basic PCR? This appeared to be another Home Run for the Yanks. Two more runs score.

Final Score – Four runs in after five batters. An easy win for the Yanks.

Some proviso’s are in order. The Alter/Lo team got in the last word – the choice spot in any debate and a layman probably shouldn’t be keeping score in this kind of highly technical battle (audience beware! ). Surely some technical considerations were missed but at least this laymen felt this inning easily went to the Yanks.