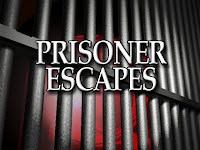 There was a prison breakout in the USA this past weekend of historic proportion. And like most escapes that require patience and tenacity, this one took 10 long months of preparation. But when the time came, the escapee acted almost without thinking, and ran with freedom in his eyes, and hope burning in his heart. No, this isn’t the story of a convicted felon escaping from the County jail. Although it did have to do with a guy escaping from his incarcerated state.

This is the story of me, doing something absolutely insane this past weekend. Something that was seminal to my progress, critical to my healing process, and something I felt I just had to do. After 10 long months being “stuck” in this place, last Thursday, I made a run for it. I escaped!

On a whim, after my Ampligen infusion last Thursday I went to the airport, bought a ticket for a 4 hour non-stop flight, and flew to Denver, Colorado! By myself! I then rented a car, drove an hour North, and spent the weekend in beautiful Ft. Collins, enjoying the crisp clean air underneath the majestic Rocky mountains.Yes, this means that I had enough energy and cognitive ability to follow a map to a place I’d never been, check into a hotel, and live at mile-high altitude. Yes, this means that the Ampligen is working better than advertised, and that my health is actually being restored. But it also meant something else of equal importance. Let me explain.

To say I have felt like a horse cooped up in a corral for the past 10 months would not be an exaggeration. As you know, when I moved here to begin the twice-weekly Ampligen infusion protocol, I could barely walk. Because my wife couldn’t stay with me full time in this new town, we hired a cook and a maid to help me. That I needed this level of assistance when I started was not over-kill; I literally could not stand long enough to fry myself an egg ten months ago. Apart from going to the clinic every Monday and Thursday to get pricked by Gwen, for the first six months I was pretty much a one-trick pony. Week after week I would live on the couch, leaving my “pen” only to go to the clinic, and occasionally to church on Sunday. Having the helpers was awesome, but I still felt like I was in a modern prison.

As I’ve written about previously, after 6 months, something changed. The side effects started to abate. Energy slowly returned. I initiated a very slow program of exercise, walking and going to the gym near my apartment. I stopped the services of my cook, and began shopping and cooking for myself (bachelor-style). I let my maid go, and have lived without help for over 6 weeks now. In short, I started to experience a taste of “normal” life – a free life – for the first time in a very long time! But that small taste of freedom presented me with a problem.


You see, although I was actually starting to take baby steps toward living a healed life, as clearly evidenced in my actions and in my body, my mind was still ‘stuck’ in protective mode; “sick” mode. Call it habit or fear or both, even though I could see myself making lots of progress, I was still scared.

That fear and self-protection habit was like a chain around my heart. If faith is the evidence of things not yet seen, then fear is the doubt of things already known. And I clearly was still acting like a sick person, imprisoned by my limitations. Even though the evidence said otherwise.

It came to a head last week when a social activity was presented to me and I turned it down immediately…out of habit! Despite all my test scores and charts* showing amazing progress, despite 6 full weeks of living independently and going to the gym everyday with energy, despite aching for friends and social interaction, when they asked if I could go, I said as I had so many times in the past, “no, I better not.”

Ten seconds later it hit me. “What was I thinking????” I had gotten so good at living “within” my limitations, I couldn’t break out of my limitations. I was an expert at living like a sick person! And it infuriated me.

Here I was at Week 40 on the Ampligen protocol, with 20 years of published research telling me that people were healed on Ampligen by Week 40, yet I still was on guard. Here I was with six full weeks of independent living, yet I was still playing it “safe.” Like the men released from prison who still sleep on the floor after being released from incarceration, even though they now have a bed, I was trapped by the habits learned over years of sickness. Those habits protected me at the time, clearly. They probably kept me alive. But now, they were like quicksand, keeping me “stuck” in a place I should no longer be.

Years ago, long before I got sick, I was trapped in quicksand once. Well, more accurately, my horse Gypsy was trapped in quicksand, with me on her back. Both the horse and I knew the serious trouble we were in, as we sank immediately up to the top of my boots, and then kept sinking about an inch per second. Gypsy thrashed at first, but that only made things worse. Thankfully, I was with an experienced equestrian, my best friend Ed, who as a cowboy in Arizona knew exactly what to do.

Dismounting and coming over to me while still on dry land, he leaned carefully over, grabbed the reins from the bit, stood slightly to the right in front of Gypsy’s good eye, and smiled at her. By this time the quicksand was inching close to my knees, and both the horse, and I, were getting nervous.

Then Ed said something I thought at the time was the most ridiculous thing I could have heard at that moment.

“We have to get her mind off the sinking, and on to the running.” Ed said seriously. “She’s a racer at heart” he continued, “so we have to get her brain out of that there quicksand, and her body will follow.”


Because Ed was my only hope, I decided against vocalizing either my doubts about his idea, or asking him why he said “that there” when as a Scottsdale native his English was normally otherwise perfect. Instead I just asked “How do we do that?”

“Well, on the count of tree” Ed said smiling, clearly enjoying this cowboy twang he decided to adopt at this moment, “I’ll fire off my pistola here, and you give her a good kick in the hindquarter with your spurs, and she’ll think she’s in a race, and just run right out!”

Ignoring the fact that I wasn’t wearing spurs, and only because I had no other bright idea, I did what Ed said. Pulling my legs out of the muck slowly and positioning my boots backwards, when Ed reached the count of “tree”, I gave Gypsy the hardest kick I could muster, just in time for her to hear Ed’s .357 “crack” like an explosion.

Amazingly, Gypsy did exactly as Ed had predicted. In one giant thrust, she jumped or hoisted her front legs violently out of the muck up onto the dry land, leveraged her remaining 2000 pound rear out of the quicksand, got her back legs grounded, and took off running! With me grabbing her mane and holding on for dear life, we ran around that bog in a giant circle at least three times – Gypsy so thrilled with her freedom and the thought of racing that she simply carved her own curved track in the desert!

Leaving the clinic this past Thursday, the thought of facing another long weekend alone in my apartment, combined with the recollection of my stupid knee-jerk rejection of a social invitation, was enough to make me say to myself, “enough!” I had to break out of this place I was stuck in. I had to get my mind out of the muck.

I didn’t have the sound of a gun going off to snap me out of it. But I did give myself a giant kick in the butt – and when I boarded that plane to Denver, I started to feel my legs find solid ground. When I got off the plane with no luggage whatsoever, and entered that gorgeous DIA terminal, you couldn’t stop me. I jogged down the ramp grinning from ear to ear, passing the people mover like I was Gypsy, out of the sinkhole, racing again.

Until this past weekend, I was sort of stuck in a quicksand of my own making. And I needed something to get “my mind off the sinking, and on to the running.” Because just like Gypsy, before I got sick, I too was a runner at heart.


This short spontaneous trip to Denver did it for me, and it was glorious. I had a super three day vacation, with no pain, no loss of energy, no feelings of being stuck. When you compare my life to where I was 10 months ago, it’s almost miraculous! Yet of all the tests I’ve taken, this was the test that really confirmed for me this amazing drug Ampligen is really working!

Now for these final 3 months of treatment, I know what my job is. As long as I can keep my brain out of that there quicksand, my body will follow.

*Below is my personal comparison chart that shows my progress over the past ten months, comparing when I arrived and started Ampligen in January, and today. The clinic keeps detailed records and measures all Ampligen patient’s progress through a number of empirical tests, regular blood work, EKGs, a running Karnofsky Score, and other physical exams and tests. However that information under the terms of the “trial protocol” cannot be revealed here. My guess is that the chart would simply confirm that which the clinic has in their records about my progress. 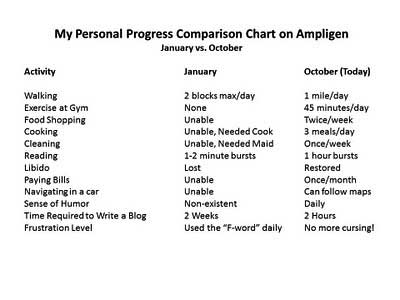