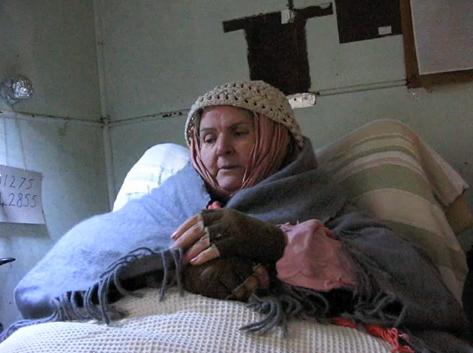 As a new year begins, I sit in my house looking out at the falling rain and think about Gillian McCarthy sitting in her unheated and leaking hut, many miles away from me in Somerset, UK. She awaits the return of the group of people who, by starting to build her a warm shelter for winter, have brought her hope. A hope that I know, from her letters and from conversations with her mother, was almost gone.

I may never meet Gillian as we both suffer from a chronic condition, though it’s more likely that I could get to her than she to me. However, I have no car and she is off the beaten track, and any journey is hard for me. We began to write through the shared disability of ME, but she also suffers from Multiple Chemical Sensitivity (MCS) – a condition about which I knew almost nothing when I started writing to her.

I never had the brain to take in the complexities of the science, and less so now with reduced cognitive ability, but a year on now I have learnt much from my contact with Gillian. As a fellow human being I was moved by her plight, and I did my best to read what I could and to try to understand how a person with MCS could become so marginalised in society that they were reduced to living in a hut (or a shed or tent in the case of others). As with ME/CFS, the symptoms of MCS vary, but in Gillian’s case she is severely affected, having been an agricultural chemist and worked with organophosphate sheepdip before her degree training, and afterwards with many agricultural chemicals including close contact in field trials.

I was reluctant to do more than write to her, as Gillian’s situation seemed insoluble. However as the year wore on and I saw that her main support was via her 83-year-old mother who lives at some distance, I felt that I had to help to advocate for her if only in small ways.

Gillian has been living in a hut for 17 years due to a mess of apparent incompetence and unwillingness by authorities to properly support and house her. I cannot see how to move that situation forward since the authorities have publicly washed their hands of her and say they have no responsibility for her. I have googled MCS and the NHS and I see that it is not accepted as a recognised clinical syndrome, so little help is available in the UK except via private medicine. I assume that the situation is similar in the US.

Sometimes a problem has to be solved in a new way. We have to be prepared to use lateral thinking, and this is what Tony Wrench and his workers are doing. They are not used to building shelters for people with MCS, but they have been willing to listen to Gillian’s needs and to research the best materials for the job – but they have been working at the worst time of the year and in truly horrendous conditions due to the urgency of her situation. Tony and the other workers have much experience with building environmentally friendly/low impact structures and it is hoped that some of their experience may perhaps serve as a future model to help other people with MCS. The den they are building will not be a permanent solution for Gillian’s problems, but it should help to save her life this winter and lead to a better understanding for her and hopefully for others with similar problems.

This project to help Gillian does not come at zero cost though, and we are still looking for help with funds to complete it. Several short videos have been made as the work progresses, and ITV Westcountry, who filmed just before the building started, are due to return in January to film and interview again. A website about the project is under construction. The most recent film is on Youtube: “Gillian Den build”:

How you can help

The den will cost around £10,000 and so far about half of that money has been raised. 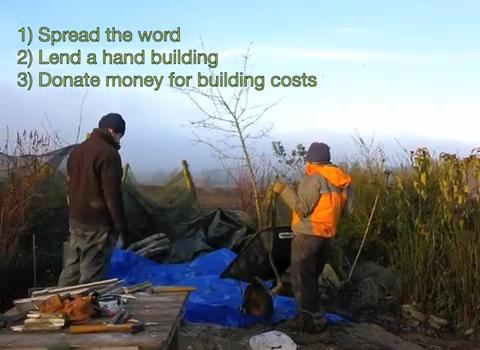 Or via Paypal (there may be a small charge for payments from overseas or from credit/debit card):