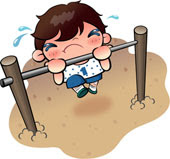 I absolutely hated gym class in Junior High. I was a skinny kid growing faster than my Mom could sew, and I had no arm muscles whatsoever. So when the dreaded “physical exam” days came around, I usually got physically sick. Trust me, vomiting cereal before you have to do pull-ups does not help your score. But it didn’t matter. Because I could not even do one pull-up, even on a good day, with my belly full of Captain Crunch. When the diameter of your arms is smaller than that of the pull-up bar itself, the bar will win every time.

What made it such a trauma for me was that you had to do these supposed “feats of strength” in front of both the gym teacher, and your classmates. And here was the rub: You had, as the teacher would always announce in that bellowing voice, “a full 60 seconds to do as many pull-ups as you possibly can!”

Well, when you can’t do even one pull-up, having sixty full seconds isn’t an advantage, it is just out and out child abuse. I mean, how long does it take me to do zero pull-ups? I’ll tell you straight out- about zero seconds. But yet there I was, hanging by my skinny saplings called arms, humiliated, with all my friends snickering for what seemed like an eternity. And my masochistic gym teacher with his stopwatch and mocking attitude actually making me hang there for a full sixty seconds, shouting “come on, you can at least do one!”

It’s funny how the very same words can be either cruel or motivating, depending on the delivery. For years, that memory, and the teacher’s shout, haunted me like a bad dream. Until of course, I got to college, started eating Freshman portions, and allowed my fraternity brothers to teach me about weight lifting and exercise. The very first time I had an upperclassman show me the benchpress, he was spotting me, and that weight came down on my chest like an anvil. But with true belief in his voice, plus a little testosterone, he said, “Come on, you can do it! Do just one! All it takes is a start!” And to my surprise, I actually pushed that 135 pounds off my chest, and back into the rack. His belief in me, and seeing other guys benefiting from exercise, was all I needed. My commitment to exercise began that day in college as a 17 year old freshman. In one semester I went from being a gangly 6 feet, 140 pounds, to a muscular 6’1 190 pounds.

From that day on, sports, fitness and exercise were part of me for a full 15 years, until I got sick. But M.E. as you know, of course changed everything.


For the past many years, and more dramatically in the months leading up to my starting Ampligen, I have watched my energy, and my ability to exercise, diminish. It got so bad, that when I arrived in this city to begin the Ampligen protocol, I couldn’t walk from the airplane gate to the baggage claim. I was no longer 190 pounds. I had no muscularity left. I was barely 167 pounds of weakness with skinny arms. You could have given me a full sixty seconds, and I still could not have done one pull-up.

But that’s all changed now. Today, seven months after arriving here and being almost completely bed-bound, I am exercising again! It started slowly, but for the past full month, I’ve been going to the gym now almost every morning. I give the credit to Ampligen, and the amazing new things it has done to my body. But I also approached exercise this time in a new way as well. I guess some would call it a “holistic” approach, in that I decided to exercise more than just my body, but my soul and spirit as well.

It only makes sense. My doctor has told me for years that too much “mental” work is just as bad for me as lifting too many weights. I can crash after walking too much just as easily as typing too much. Psychologists and theologians alike teach us that our emotions, which are comprised of our intellect, our will and our emotions, can affect our bodies, and vice versa.

So here’s how I’ve been exercising all three:


My Body– Dr. Irma Rey, Assistant Professor of Medicine and Sport Team Physician at the University of Miami, now working with Dr. Nancy Klimas says we should take a “low and slow” approach to exercise. Her research shows that especially for M.E. patients, we need to do exercises that are low in intensity, and slow in progress, so we don’t crash. Because we have post exertional malaise working against us, because we build up lactic acid faster than “normal” people, we cannot exercise to exhaustion, or we will crash and burn big time the next day.

So Dr. Rey recommends a workout similar to what I’ve been using. Stretching, light short low weight lifting sets with long rest periods in between. If I do 1 minute of exercise, I wait a good 5 minutes to do the next one. And never do too much in one day. Dr. Rey recommends doing 2 short workouts a day, to restore energy.

This is what Dr. Darrel Ho Yen recommends in his brilliant concept of our thinking of energy as money. He says “Don’t spend it all at one time, in one place.” I’ve applied this concept to my exercise routine, and make sure if I spend an hour at the gym, fully 30 minutes or more of that is resting in between sets. But I also plan my entire day ahead of time, and count the walks I’ll take, the time I’ll be vertical in the grocery store, etc.And I don’t want to “spend” energy on stupid things, like being in a long line at the bank. I’ll do my banking online, thank you! Dr. Rey also recommends doing stretches in the pool, because the cool water can help blood pressure, and allow us to stand longer than our Orthostatic intolerance would normally allow us to do without the buoyancy of the water. The point is, even if your are stuck in bed- do something. Do stretches. Even if it’s just one minute, her research shows that the benefits of stretching and releasing endorphins (which she says are more powerful pain relievers and move elevators than opiates) are worth it.

My Soul– Exercising my mind, my will and emotions also takes planning, and for me, some sort of disciplined approach. So I make sure I plan my exercise routine for my soul each week as well. This includes playing some online mental stimulators like Texas Hold-em or Sudoku, trying to play the piano a little, participating in some online forums, and of course, listening to music.

My neurotherapist Kim Phillips told me for the sake of my sleep time, I should not do these things at night, because they stimulate my brain too much, and can keep me falling into REM. She also told me that sexual intercourse and orgasms release good chemicals. The other thing that exercises my soul pretty well is a good comedy movie. As they say, laughter is good medicine. The one thing I recommend you not do is watch too much talking head TV, like Olberman, O’Reilly, Beck, Maddow etc., because the negativity they spout actually counteracts the good chemicals that the aforementioned things stimulate. Similarly, if an online Forum moves from informative and supportive, to an online debate, don’t participate. Just choose to not engage. As my doctor said, stay away from toxins, including toxic people. You don’t need those chemicals right now. Exercise the discipline of your will and let good stuff into your soul. Not the negative.

My Spirit – This past Sunday, I decided I wanted to actually “go” to church, and participate in the worship service because I wanted to sing. Many Sunday’s in the past, because of the debilitation of M.E., and because of Ampligen’s side-effects, I would watch the services “live” on the Internet, from my bed. TV church isn’t bad, but there is nothing like singing along with a 100-member gospel choir to lift my spirits, so if I have the energy, I go.

The problem with that in the past has been, this is a classic Baptist church in the Bible belt, so there is no such thing as a 3-minute song a hallelujah and then you sit down. Oh, no, no, no- help me Lord! These songs all have 7 verses and 8 choruses, and then we do it all over again. It’s lively. It’s inspiring. It’s a lot of fun. Most of all it is healing. Dr. Graham Welch, Chair of Music at University of London cites research that shows that when we sing, the brain and the endocrine system release healing hormones, endorphins, as well as cortisol and immunoglobulin. When you follow that with an inspired sermon that builds my faith in God, and the future, well, I leave feeling whole. But many Sundays, I just haven’t had the energy reserves to get out of bed. Let alone stand with the congregation for all those songs.

This past Sunday, really having a desire to sing and participate, I said to my wife, “I just don’t know if I can do it.”


“Do what?” she said, as she continued putting on her Sunday dress.
“Stand there all that time and sing all those songs,” I replied, remembering the choir.

With echoes of past teachers and fraternity brothers bouncing around my brain, she said the only thing that I needed.

“Then just sing one. At least you can do that.”

And so we went, and that’s exactly what I did. I sang one. Then another one. Then 5 more. For 45 minutes, non-stop, on my feet.