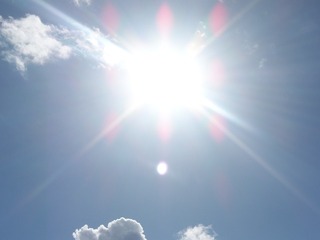 For most years in the last two decades, summer has been my best season. My serious crashes always took place between September and April. And every year, beginning in May, I would begin my slow climb back toward something resembling health.

Laying outside in the sun for 20 minutes or so in the mornings seemed to make a difference surprisingly quickly. Being able to go for walks, being out in the summer weather, increased my mood and seemed to be one of the factors decreasing my ME/CFS symptoms.

By mid-summer I usually had advanced to being a dull/normal. Not bursting with energy, but I was no longer a staggering, shaking vegetable either. By the end of the summer I would usually be able to go for half hour walks and enjoy basic activities every day. My cognitive abilities also improved during these months.

By the end of the summer I would be telling myself that it seemed like I was getting better. Nobody was more shocked than I when every September I would find my energy diminished, my mental faculties shutting down and my physical stamina trampled by parasthesia and muscle weakness once more.

I cannot prove that my discovery of vitamin D in the fall of 2007 prevented the major crashes that first winter, and most winters thereafter. It is the only thing that changed though and I am convinced that vitamin D has been a superhero in my life.

I take a lot of it, 10,000 IUs a day, year round. This is not to say that you should be doing this, everyone’s vitamin D needs are unique to them. I tried taking less at a time and found that the fewer tablets I took, the more my ME/CFS symptoms would re-emerge.

All this makes me think that my summer resurgences were and are linked with my own personal tendency to be vitamin D deficient. Do I know this for sure? No, I don’t. But I like feeling better, and I prefer that this not be limited to a few months in the summer.

But summer is not a panacea for everyone with ME/CFS. And in fact, there were a few summers when I couldn’t handle being in the full-bore sunlight. I learned later this could be called photophobia, which is not a fear of anything, rather it is a physical intolerance for bright or even moderate light. If I was outside for more than a few minutes, I would experience an amazing visual grab bag of symptoms.

What I was seeing was washed with a white light, rendering my vision blurry. I’d see quick little light zaps, and floaters of light in my line of vision. It was hard to track or focus my eyes on anything. This situation would often trigger renewed vertigo, and left me with a cognitive lag, as my brain tried to process what I was trying to see.

The only remedy was to get into a darker location, and not try to do anything till the phenomenon would pass. Sometimes it would correct itself within 20 minutes, other times the after-effects stayed with me through much of the day. Those summers, I avoided being outside very long.

My son Jesse, 23, has been sick for seven years. He spent the first of those years in a darkened room, away from the light. When I persuaded him to try my method of lying in the sun, it made him worse. He would feel sick and light-headed afterward, and his vision was negatively affected. So that was a lesson for me.

He has gradually been improving the last couple of years, and is now able to spend some time in the sunshine. But he would never willingly spend a day outside in the sun because too much of it is still a bad thing for him. The heat makes him feel unwell, rather than revitalized as it does for me.

He prefers to be cold, while my muscles start to ache when the temperatures are too cool. I need temperatures to be in the low 70s, so no keeping the thermostat turned down in the winter to save money for me. He lives in this warm environment by keeping his window open a good deal of the winter, and a fan on in his room when it’s too cold out for open windows.

Some of us embrace the return of the sun each summer. Some of us dread its effects.