Jody Smith loves knitting. Again. She thought her days of knitting and purling were long over but … she’s back … 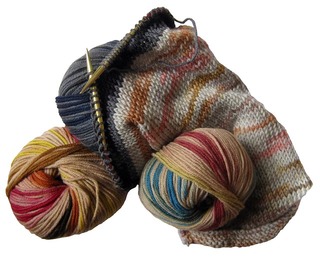 A dozen years ago I was so decimated by ME/CFS that I couldn’t read, watch TV, or flip through a magazine. My days were spent zipping back and forth along the spectrum of waking and sleeping.

I was wide awake staring at the ceiling, undulating with a seasick vertigo and parasthesia. I was fitfully in and out of sleep. I was sleeping deeply for long and irregular hours, waking sometimes in the middle of the night, in the middle of the afternoon, in the evening … interesting that rarely did I wake at a “normal” hour of the morning.

And then there was the so-called waking state that was so typical of that time for me, where I was conscious but devoid of conscious though, unable to have or understand a conversation, unable to do anything. Anything at all.

After some months of this I became more awake and aware of my surroundings. And I became so bored during the empty hours of the empty days that I sometimes wondered if this was any better than the mindless days of somnolent existence I’d just left.


I really needed something to do but the big hurdle was coming up with something I could do without crashing after 10 minutes and losing the tiny, precious ground that had taken so long to gain.

Reading had always been my habit when I needed something to fill my time. Couldn’t do that now. Had tried crossword puzzles — which was a hilarious idea when you think about it. Why would that be easier than reading? It wasn’t.

Television and radio was out. Just completely out of the question. So now what? I stared out of the window from my chair in my bedroom, but I live in a quiet cul-de-sac and the only activity I saw most of the day was performed by the squirrels running from tree to tree.

One day it occurred to me that maybe I could knit. Fortunately I’d learned how some years before. One thing was for certain, I was in no shape to try to learn anything new. It had to be something that (hopefully) would be automatic, a skill I’d already mastered. As long as I hadn’t forgotten how, knitting was a real possibility.

I could not have followed a pattern, didn’t bother with a guage (again, non-knitters, forget about it). I just started in, and hoped that it wouldn’t end up as a tangle of snarled yarn. A couple of false starts, though, and I was in business. At first I could only do it for a few minutes, then had to go to bed. Worn out brain, and sore hands. Had to recuperate.

Over the next month, though, my body and brain made their adjustments and I was knitting (okay, purling) for hours at a time. By the end of that winter I had created eight panels that were each six feet long, which I stitched together to create an enormous, lumpy blanket.

Nobody ever used it, to my knowledge. But that had never been my intention in the first place. My goal was to do something that helped quell the mess in my head and made me feel like I was making something happen, and that my time was doing something more than just leaking away.

Eventually I unravelled most of this blanket and used it for other projects when I was feeling better a few years later. I kept one panel which I made into a scarf for my 14-year-old daughter at her request.

I have knitted off and on since then. There would be years when my hands and arms were too sore and crippled and my supplies gathered dust. The last time that happened, several years ago I was afraid I was done for good.


But last winter I made over an old sweater of my husband Alan’s for our dog Cleo. She’d hurt her hip, which is especially unnerving when it happens to a dog with only one remaining back leg. I’d read that keeping it warm when outside in the winter might help.

So Cleo ended up with two doggy sweater vests that were long enough to cover that hip. One was brown, made from Al’s sweater. The other was dark green, revamped and reknitted (knitting and purling, this time) from a sweater I’d started five years earlier and had become too crippled to finish.

All of this was enough to make my fingers eager to get creative. I was careful to start out (as I do with everything) only spending 5 to 10 minutes in a day, with a day or two in between. Within a few weeks, I was spending a good bit of my evenings with needles clacking.

Since last winter I’ve made myself a hat and scarf, and an infinity scarf for a friend. My daughter Sarah and son-in-law Jordan are having a baby later this month. They live a province away so I am not going to be there with her when the baby is born. I wanted to do something special for them so I knitted a sweater, hat, scarf and blanket for my new grandchild.

The hat has a pumpkin stem, blossom and leaf on the top, and sweater has a leaf and blossom, and so does the blanket. I call it her Pumpkin Layette. I also just mailed her what I called a chakra shawl (named for the colours in it) and a hoodie for the baby with two heart-shaped pockets. One pocket holds a bunny finger puppet and the other has a teddy bear finger puppet stuffed inside.

I’m presently working on hats and scarves for my grandson’s birthdays in the fall.

I’m having a ball, I have to say. The odds have been against me for a long time. I can’t guarantee that there won’t be another cave-in down the road, but so far so good. I have contacted a local group that knits hats for NICU babies in hospitals around the area.

I just heard about knitting club meetings held in my town twice a month. I might even go to one, maybe even more than one.

If you have ME/CFS you know how monumental that really is. I haven’t gone to something like that in years, though I used to do that and far more before I was sick.

I’m toying with the idea of selling some of my knitting. We’ll see how that goes.

So you never know how something might turn out, even if it started badly. Or kept stopping, starting and stopping again. Even if you only started doing it in the first place to save your sanity as you slumped in your rocking chair or flopped in your bed looking down into the abyss.

As I worked my needles that winter 12 years ago, with no more thought than that I wanted to finish the next row, then the next … I could not have hoped that it would lead to the joy and satisfaction I’m finding today.

Have you been surprised by unexpected results that brought you great satisfaction?