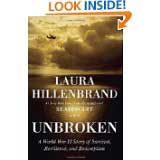 Already 180 reviews on Amazon – a solid five-starer…Lauren Hillenbrandt has struck again…..Amazon Best Books of the Month, November 2010: From Laura Hillenbrand, the bestselling author of Seabiscuit, comes Unbroken, the inspiring true story of a man who lived through a series of catastrophes almost too incredible to be believed. In evocative, immediate descriptions, Hillenbrand unfurls the story of Louie Zamperini–a juvenile delinquent-turned-Olympic runner-turned-Army hero. During a routine search mission over the Pacific, Louie’s plane crashed into the ocean, and what happened to him over the next three years of his life is a story that will keep you glued to the pages, eagerly awaiting the next turn in the story and fearing it at the same time. You’ll cheer for the man who somehow maintained his selfhood and humanity despite the monumental degradations he suffered, and you’ll want to share this book with everyone you know. –Juliet Disparte

The Sound of a Wild Snail Eating
By Elisabeth Tova Bailey

The Sound of a Wild Snail Eating is the perfect book for me. The heft and print size are exactly right. It’s not too large and heavy, it is not very long, and the print is very readable. The title causes me to ask the questions: If the snail is wild then who hears it eating? Is that even possible? Why write about a snail eating anyway?

The reviews say the book is “beautiful and moving and funny and sweet and wise and profound.” Did you know that Elisabeth Tova Bailey’s book has just been named to the top ten books of 2010 in Science & Technology by the American Library Association’s Book List Editors?

Elisabeth wrote The Sound of a Wild Snail Eating for us . . . for those with Myalgic Encephalomyelitis and Chronic Fatigue Syndrome. It is a book written about “being” . . . about observing . . . and about escaping the confines of illness.


Elisabeth is bed bound, moved from her farmhouse to a studio apartment where she has caretakers. A friend sets a small pot filled with violets dug up from the woods beside her bed and says “I found a snail in the woods. I brought it back and it’s right here beneath the violets.” Elisabeth wonders why she would enjoy a snail and what on earth would she do with it? She is unable to get out of bed to return the snail outdoors. Yet, now she is responsible for this tiny living thing. The thought overwhelms her.

WHY? You know the answer. People with incapacitating ME and CFS can barely take care of themselves let alone another living creature. We are confined by illness and the challenges it brings are always with us.

Elisabeth writes on page 5: “When the body is rendered useless, the mind still runs like a bloodhound along well worn trails of neurons, tracking the echoing questions; the confused family of whys, whats, and whens, and their impossibly distant kin how…. Sometimes my mind went blank and listless; at other times it was flooded with storms of thought, unspeakable sadness, and intolerable loss.

I am hooked on this book. I understand what the author is feeling and I want to know more. What about the wild snail?

On page 6: “It was all I could do to get through each moment, and each moment felt like an endless hour, yet days slipped silently passed. Time unused and only endured, still vanished, as if time itself is starving, and each day is swallowed whole, leaving no crumbs, no memory, no trace at all.

Do you feel what she means? Our sense of seconds, hours, days, weeks, months and years change once this devastating illness has hold of us. What about the wild snail?

Chapter 2 is called Discovery. Elisabeth watches the snail. It is alive and moving slowly. On successive mornings, she sees small square holes in scraps of paper, postcards, and envelopes that had been propped against the lamp on the bed table. Thinking that the snail might need some other food, she places withered flowers at the base of the pot. The snail moves to eat. “The sound was of someone very small munching celery continuously…the tiny, intimate sound of the snail’s eating gave me a distinct feeling of companionship and shared space.”

Early on Elisabeth discovers that the snail can move a distance in her bedroom before returning to the flowerpot in the morning. What if someone stepped on its delicate brown shell? Caretakers find a glass terrarium and landscape it with moss, leaves and bits of native plants. Elisabeth reads that snails like to eat mushrooms and a portabella is placed in the “little green kingdom.”

There you have it. Elisabeth cannot get out of bed, but over months she has so many questions about the snail that she lives those questions.

Chapters weave Elisabeth’s limits and lack of “functional capacity” with the phenomenal abilities and quiet habits of a snail. Snails live in small colonies, yet they each live very hermit-like lives. “I knew there were other people homebound from illness or injury, scattered here and there throughout rural towns and cities in the world. And as I lay here, I felt a connection to all of them. We too were a colony of hermits.”


Elisabeth Tova Bailey, an observer of Gastropods, read so many books and articles on snails, that she has become somewhat of an expert. On another level, Elisabeth is an expert on living with this devastating illness. It took her four years to write The Sound of A Wild Snail Eating.

I am still thinking about Elisabeth’s observations. This is a good read—realistic—but also inspiring. The book can help educate your family members, your doctor, and your friends about the reality of living with ME or CFS.

Please help spread the word, go to your bookstore, go online, or request The Sound of a Wild Snail Eating at your local library. 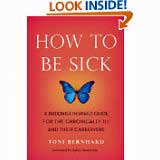 How to Be Sick: A Buddhist-Inspired Guide for the Chronically Ill and Their Caregivers by Toni Bernhard

Don’t let the title of How to Be Sick fool you. This book is not about sickness behavior or secondary gain. Author Toni Bernhard describes the spiritual practice of “how to live a life of equanimity and joy despite my physical and energetic limitations.” It might sound impossible. Who can live a joyful life when confined to bed? But Bernhard shows the way with compassion and mastery.

Bernhard understands the suffering and challenges of living with chronic illness, as she has been severely ill with CFS since 2001. Her career as a professor at a prestigious law school ended, along with her ability to participate in almost every other aspect of normal life. Bernhard is housebound – frequently bed-bound – and this suffering set her on the path to find joy within her harsh limitations.

Each chapter of this book addresses an emotional or spiritual challenge of being ill. Bernhard offers simple and practical ways to manage our sorrow, cultivate compassion, communicate clearly with doctors and family, and cope with isolation. While Bernhard’s approach is grounded in her spirituality and is a “Buddhist-Inspired Guide,” one does not need to be a Buddhist or follower of any religion to apply the practices described in this book.

Many of these practices are designed to ameliorate emotional suffering caused by illness. One example is what Bernhard calls “Weather Practice.” She was inspired by a line from the film The Weather Man, in which a meteorologist explains why predicting the weather is a guess: “It’s wind, man. It blows all over the place.” Bernhard experimented with applying that image to her thoughts and moods. Fear, anxiety and sadness are inevitable, but like the weather, they blow on through. Reminding oneself of the impermanence of emotional states, Bernhard says, can lessen the negative impact of grief, frustration and other common responses to illness.

Compassion, especially directed towards oneself, is a cornerstone of How to Be Sick. Bernhard recounts the anger and blame she directed at herself when she relapsed during a family holiday. She berated herself for ruining the day for others, for being a burden, for being ill. But when Bernhard allowed herself to feel compassion for her situation, she felt transformed and took steps to alleviate her physical and emotional suffering. Equanimity, she says, “is accepting life as it comes to us without blaming anything or anyone – including ourselves.”

How to Be Sick offers a practical approach to coping with chronic illness. Bernhard writes openly about her own struggles and how she approaches suffering. The book includes a suggested list of practices for different situations, such as missing a family celebration or receiving dismissive treatment from a doctor. These tools and the encouragement to experiment give the reader an opportunity to ride the waves of chronic illness with more calm and stability. The simplicity and adaptability of the practices, combined with Bernhard’s gentle honesty, make this book truly inspirational. You can contact Ms. Bernhard through her website at https://www.howtobesick.com 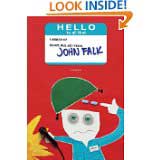 Hello to All That – A Memoir of Zooloft, War and Peace- By John Falk

No- this isn’t about ME/CFS but it is about someone hit hard, out of the blue, by a mysterious illness (uni-polar depression) that had nothing to do with psychology and everything to do with brain chemistry. This is a poignant, hilarious and eye-opening book plus it’s just a damn good read. Would you go off to Sarajevo to cover the war if you were depressed? John Falk would and he did. Meet refuges, con artists, families and a sniper on the edge in John’s Falks memoir. It was my favorite read of the year. The ME/CFS connection – after recovering from depression, John Falk came down ME/CFS after a food poisoning incident while traveling

Booklist Review – As an adolescent growing up in Long Island, Falk suffered the onset of a profound depression that eventually held him captive in the attic of his parents’ home, afraid to leave and afraid to live. At the age of 24, Falk found some relief in Zoloft but felt he needed to be jolted into life by pursuing for real what was his only form of escape–reading the memoirs of war correspondents. Off he goes to Sarajevo with dubious credentials and no contacts, so conspicuous in his body armor that townspeople at first take him for a spy. With the help of a local family and a freewheeling freelance reporter, he eventually situates himself and reengages in life amid the harrowing fear of death. Falk alternates between recollections of his numbing depression and his incredible adventures in Sarajevo. Zoloft and a promise made to his mother pull Falk through. This is a thoroughly engaging memoir, sometimes hilarious and sometimes horrifying, as Falk recalls episodes in a brutal war and one man’s personal struggle to reconnect with life. Vanessa Bush 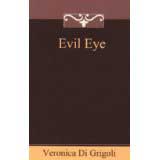 A girl finding her place in the world, but it’s practically a travel book and history primer to boot. The author really seems to know her subject and location — you get immersed in the sights, sounds, even the scents of Istanbul. And at every turn there’s fascinating cultural and historical details that tie into the story. But the book would be nothing without the richly-portrayed and often eccentric characters that populate it. The plot never falters — you won’t believe what this girl goes through when all she planned was “teaching English in Turkey.” That’s the least of it. There’s genuine mystery and it all comes together in the end. Highly recommend, especially for anyone interested in travelling to that part of the world.