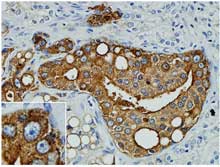 Cheney: If it were, we’d see a lot more than 10 million Americans infected with it, so there must be something that’s inhibiting the effective transmission of that agent given those numbers. Ten million versus let’s say one million. And also many people infected simply don’t get sick. At least they don’t get sick with CFS.

Number one: We found evidence of elevated RNaseL activity in the Lake Tahoe epidemic of CFS way back in 1985. RNase L activity suggests the presence of a viral infection.

Judy: That’s correct, I’ve checked. It can’t do it’s job and it can do a lot of bad things and overactive RNase L will cause the cell to die and apoptos and spli it’s self immediately into the blood stream.

Cheney: The very presence of RNase L suggests viral etiology for that epidemic.

Cheney: NK function seems to define the illness. The very first paper on this was out of Japan back in 1987 describing what they said was low NK Syndrome which is CFS back in Japan. And low NK syndrome has been a feature of this disease. Do you think basically, XMRV can cause low NK function?


Judy: Absolutely. A Natural Killer cell’s job is to clear viral infected cells and to clear tumor cells. So if you have a retrovirus present which unchecked, it’s continually expressed, and the NK cell can’t clear it, it [NK cell] eventually becomes exhausted and of course, the virus can do something to the NK cell to allow it to persist. So cells whose job it is to kill virus infected cells can’t kill XMRV or can’t clear it, would then have defective NK cells, a persistent marker of infection.

Cheney: In the Lake Tahoe epidemic many years ago, but also here in my clinic in Ashville, we frequently see an elevated CD4 to CD8 ratio, primarily due to CD8 depletion, and I wonder if you might comment. Is CD8 depletion something that XMRV might be able to cause?

Judy: We don’t see XMRV as a cytotoxic virus, thus far. Certainly, it is possible through indirect effects, through mediators or what’s known as cytokines, we could see dysregulation of the adaptive immune response which is the CD8 cell. But we don’t see direct cytopathic. More this virus seems to be like HTLV-1 and not kill it’s cells like HIV.

Cheney: The CFS is highly associated with activation of herpes group viruses, especially EBV, HHV-6 and CMV. I was wondering if XMRV infection is consistent with the activation of other human herpes viruses that they are already infected with.

Judy: Oh absolutely, and again we go back to other retroviruses, HTLV-1, in addition to leukemia that it is causative for, has associated with it a disease called HTVL-1 associated myelopathy, where it is a myelopathy type disease. The patients stagger, can’t walk, end up in wheelchairs, and it is related directly to viral load but they don’t understand all of the mechanisms. Importantly, in XMRV family members in animals the envelope protein actually is a neurotoxin, so parts of the viruses by themselves, without all the infectious replicating virus, can cause neurotoxicity. We are actually investigating the envelope protein of this virus as potentially a neurotoxin.

Cheney: A lot of these patients, if you investigate their immune system, there’s evidence of significant activation of the immune system of almost any parameter that you look at, particularly cytokine elevations of various kinds and evidence of TGF beta 1 activations. Suggesting the immune system is really activated and there’s kind of a counter response trying to tone it down. Is immune activation, which we almost see universally by cytokine markers consistent with XMRV infection?

Judy: Well yes, and every other retroviral infection, absolutely. Again, it goes unchecked, so the immune system is trying to do it’s job, clear the virus, keep the virus down, and when the virus goes unchecked, it causes the kind of things we discussed with elevated T cells as the problem. So in the face of chronic inflammation you develop immune deficiency.


Judy: Absolutely. It’s highly possible and we are actively investigating it.

Well here is my attempt at part IV. There are one or two words I couldn’t get (indicated by ??) and probably many more where I got it wrong, so I will be pleased to get corrections from anyone. It’s pretty technical at times (as well as hard to hear), so I’ve kept it close to verbatim although that makes it a little rambling and repititious, sorry.

A. Paul Cheney: Its my opinion that the most important thing that matters is age. It seemed to me that the younger that people are the better chance they have of getting over at least significant illness such as chronic fatigue syndrome but as you age and get older and older and older it seems its tougher and tougher and tougher to recover from an illness especially after you’ve had it for more than about five years. So length of illness seems to be a variable in prognosis but especially age is a variable.

I have not found that severity is an important determinant of prognosis. I’ve seen very, very sick people both young and old that have been sick for several years who seem to get over this syndrome of chronic fatigue. But if they’ve had it for longer than five years and they are older, and old here is over forty, then it seemed to be tougher and tougher to see a complete cure, though people do get substantially better.
One of the variables that seems to also be in play in prognosis and in how severe the illness is, is the degree of stress in ones life and the chaos, the psychosocial chaos one is in and I just wanted to ask Judy if stress, and specifically the accompanying steroid hormone response such as cortisol during stress.

Q. Paul Cheney: Does cortisol, which is activated in the stress response system, could it play a role in activating XMRV?

A. Judy Mikovits: Yes, part of that switch I mentioned at the beginning of the talk there is a cortisol responsive on-switch for the virus. Every time cortisol is present in the cells when the virus is present, it can turn it on, so you’re spreading the virus ever so slowly throughout your healthy immune cells and the idea is the more cells that get sick, the more clinical symptoms you see.

Q. Paul Cheney: I have one sort of interesting question, it came to some extent from out of left field. He said he had a testicular cancer, in his case a seminoma, he’s had Chronic Fatigue syndrome for 24 years, beginning as a mono-like illness young in life (I believe he was 25 years old). Many years later he developed a seminoma, he also developed a syndrome known as Brugada’s Syndrome [https://en.wikipedia.org/wiki/Brugada_syndrome] which is a disorder of cardiac rhythm disturbances that can lead to ventricular fibrillation and sudden death. His question is, could XMRV possibly explain both the testicular cancer that erupted years later and also a disturbance of cardiac rhythm?

A. Judy Mikovits: Yes it can be postulated and very testable hypothesis for us, certainly there are many symptoms and we do have evidence that XMRV can infect cardiac myocytes and pericytes so there is reason to suspect that and I don’t know clinically about the development of seminoma, but if inflammation is involved and these stromal cells can promote the progression of a tumour, that’s a testable hypothesis, that could indeed explain all three conditions.

A: Paul Cheney: One of the interesting things about Brugada’s Syndrome, assuming you don’t have a genetic defect, and only 20% of cases have a genetic defect, 80% do not appear to [have one]. On echocardiography we see evidence of increased right ventricular strain which is a compensatory mechanism for diastolic dysfunction common to CFS patients. Increased strain on the RV (right ventricle) could possibly cause a Brugada-like Syndrome since the (a)etiology of some of the rhythm problems appeared to be around the right ventricular area and there’s right ventricular disturbances on pathology seen. So I think the link could be there.

Q. Paul Cheney: We are getting near the end of this session, so Judy are there any more comments you would like to make either on XMRV or the future work of the WPI ?

A. Judy Mikovits: Oh yes, so the institute is moving forward, we wanted to thank everybody who asked questions through our website or through Paul’s website. We will endeavour to answer those that we didn’t answer and some who asked me more specific questions I will answer.
We’re moving forward in better diagnostics and therapeutic opportunities on several fronts, from the development of anti-retrovirals to the development of immune modulators and understanding how the immune system, how the host, the human, interacts with the virus.
We are continually encouraged by everything and all the support we get from you, and from the patients, and the patient support groups worldwide, and we certainly appreciate it.
Please keep your questions coming in we endeavour (although we fail) to answer every one in a timely manner. But we will have that research approval finally for that study next week, so do look for that, as we’ll be calling you and asking for your participation and we certainly appreciate it, to unravel all the mysteries of XMRV and its role in CFS and other diseases, so thanks again for all your support.

Paul Cheney: I think we’ve about exhausted our patients, they only last about 40 minutes anyway, so I’ll draw this to a conclusion. I’d like to thank very much Judy for being here today and answering all of these questions. For the audience, this will be available for rebroadcast on the public blog section of the Cheney research website. We plan to do these again in the future either monthly or bi-monthly on various topics that come up. We’ll let you know more about that through our newsletter. Thanks for joining [Recording Terminates 38.40]