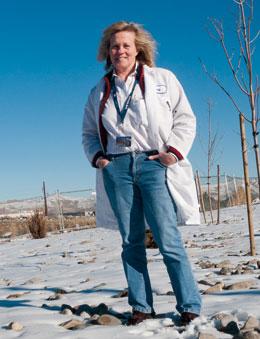 The Mikovits era at the WPI was turbulent one, filled with almost Shakespearean highs and lows. With the discovery of XMRV she helped bring a degree of excitement and attention to the chronic fatigue syndrome field it never seen before. It was and is an turbulent time, and perhaps fittingly her departure was a turbulent one as well – with the WPI stating that she was terminated over a disagreement over whether to share samples with other researchers.

An Exciting Start – Working in a major NIH lab lead by Dr. Frank Ruscetti, Dr. Mikovits had impeccable credentials. Her willingness to take on research in a controversial field can’t be overstated, and once in it, she became an ardent advocate, demonstrating a high degree of passion. Sometimes sending long emails to patients she displayed a striking empathy for the patient community.

With an engaging personality and her passion and commitment for helping ME/CFS patients, Dr. Mikovits most likely would have been a effective Research Director if the XMRV finding had been validated but during the difficult times that followd she lacked the touch needed to keep the WPI on its feet. With noted retrovirologist Dr. Coffin, portraying Dr. Mikovits as a hapless ‘Joan of Arc’ figure, and no one stepping up to defend her, she retained little ability to move the WPI forward in a vigorous fashion.

Ultimately Dr. Mikovits, with no Research Director experience, ended up, being a poor choice to lead a young research institute in what ended up being a major scientific controversy and Annette Whittemore has made the right decision in ending her employment at the WPI.

Harsh Scrutiny – With the XMRV finding landing in the most prominent scientific journal in the world a young WPI, still working out of rented labs, was guaranteed to face a great deal of scrutiny and needed to build a reputation as a professional, impeccably run organization. Dr. Mikovits tenure at the WPI, however, leaves the organization in considerable trouble. As well-liked as the WPI is by patients, talks with researchers suggest it is currently held in low regard by the research community. This all could have been avoided.


Losing Focus – When the negative findings rolled in an apparently very frustrated Dr. Mikovits lost focus and became more intent on defending her discovery than in steering the WPI and the CFS Community through rough waters. Instead of reacting in a calm fashion that supported the WPI, Dr. Mikovits at times acted defensively, disparaging researchers with negative findings, and making at times outlandish ( eg ‘XMRV is worse than HIV AIDS in Africa’ ) or unsubstantiated claims (XMRV is present in autism, etc.) in the media. Her suggestion on a television news program that XMRV may be in mother’s milk lead to mothers calling their doctors in fear.

Each inopportune comment, each statement asserting findings that had not been backed up by publication (a big no-no in the scientific community) hacked away at the WPI’s reputation. Dr. Mikovits aspersions against researchers resulted in so much anger in some quarters that a CFS researcher on a federal grant review reportedly refused to OK any grant that had anything to do with her.

Missteps – Again and again Dr. Mikovits made comments that later findings would not back up. The community was told to ignore the negative PCR findings because the culture studies and then antibody studies would tell the real tale. Then it was storage and blood collection problems, then it was the cohort (again), then it was freezing/refreezing of samples. Now Dr. Mikovits asserts that antiviral and immunomodulator use in the BWG patients warped the WPI’s and Dr. Ruscetti’s results.

In truth the WPI fell into trouble again and again – most of which were ignored by patients hopeful for a successful outcome. Dr. Peterson’s early departure, in retrospect, may have been a sign of things to come. The description of the cohort in the Science paper was amended, then the actual methods for finding XMRV were, and then VIP Dx – the only lab licensed by the WPI to do XMRV tests – was shut down for several months. The WPI was slow in returning the first BWG results, contaminated one sample with an amateurish mistake and then contaminated a second rung of samples in the second BWG test. In the midst of the controversy assertions from a young Research Institute that nationally established labs didn’t know how to do basic PCR only made matters worse.

Dr. Mikovits embrace of the Lo/Alter and Hanson findings was at odds with the rest of the retrovirology community which viewed them most likely to be contaminants. (At the IACFS/ME Conference Hanson concluded that the rest of the community was correct). The BWG findings indicated that the WPI’s commercial test found XMRV in as many healthy controls as in people with CFS. The WPI’s assertion that significant genetic variability is present in XMRV/HBRV’s is baffling given their failure to provide evidence of it two years later.

An Us vs Them Approach – Dr. Mikovits decision to cast XMRV research into an ‘us vs them’ mode engendered an environment of distrust that, in some eyes, ended up validating negative (and unfair) assumptions about people with ME/CFS. Comments suggesting that the some researchers didn’t want to find the virus and that the problems were political not scientific, lead to the perception that Dr. Mikovits was some sort of white hat figure fighting the black hats of a retrovirology community which had only to gain by validating her findings. As some members of the MECFS community spun out of control, freely disparaging researchers in blogs and Forums and at some points becoming threatening, the WPI made little attempt to attempt the calm a situation it had helped create.

The WPI aspires to achieve great things in the ME/CFS research field and they need the support of the research community to achieve them. With little support voiced for Dr. Mikovits their ability to move forward with her at the helm surely figured into her dismissal.

The Future – The Whittemore’s, of course, must accept responsibility for the fix the WPI is in. Having someone with no experience in the field, no matter how intelligent and committed, lead the Institute was always risky and the WPI, of course, was quickly engulfed in a controversy that would have tested the most experienced director. One ME/CFS specialist felt that not having a researcher at the helm left the WPI prey to what he viewed as ‘fringe theories’ and warning signs went unheeded. Early in the XMRV saga a request from a colleague that the WPI have an independent retrovirologist review the WPI’s procedures went nowhere.

The XMRV/HGRV story is not over; the big Lipkin study is still underway and Dr. Mikovits believes, given the time and money, that she can prove that HGRV’s are present in ME/CFS and she still has the support of Dr. Ruscetti. How she will continue the work now that she has left the WPI or if the WPI will continue on with her work with a different researcher is unclear.


Annette presented an inspiring vison of the WPI’s future at the IACFS/ME and her commitment is unquestioned. The WPI’s statement that, in the wake of Dr. Mikovits termination, they will re-evaluate their past work and their future focus appears to be a good one.