Simon McGrath looks at new objective evidence of abnormal response to exercise in ME/CFS patients, and the questions that researchers are still trying to answer …

Given the doubt, scepticism and even denial of benefits that often confronts ME/CFS patients, it’s not surprising that many patients crave clear-cut, objective evidence of physiological problems in the illness. Preferably something that will explain at least some of the perplexing symptoms. Something that will say: “this is real”.

And finally it seems researchers might be closing in on this.

Two-day maximal exercise tests promise to provide objective evidence for the most striking and unusual feature of the illness, the exhaustion and flare of symptoms following exercise, called post-exertional malaise.

A couple of studies by researchers at Workwell showed distinctive abnormalities on these tests, and now another researcher, Dr. Betsy Keller of Ithaca College, has found them in an independent study.

But, as usual, science is messy, and these studies raise almost as many questions as they answer. While all three studies find substantial abnormalities, key details vary between them.


Furthermore, safety is a big unknown. These tests require patients to push well beyond normal limits twice in two days — exactly the kind of thing patients have found can cause lasting relapses. As yet, there is no hard safety data.

Even so, a little-noticed Social Security ruling in April states that while there is not yet a ‘definitive’ laboratory test, an abnormal exercise stress test, consistent with other evidence in the case record, proves a ‘medically determinable impairment’ in those with ME/CFS. And Keller reports that insurers increasingly accept her tests as evidence of incapacity. The two-day test could help secure a financial lifeline for patients.

Results from the latest exercise study

Keller used a similar two-day maximal exercise test to Workwell. ME/CFS patients exercised to complete exhaustion on a bicycle while their oxygen consumption, work output (pedal power), and numerous other measures were recorded. Then the 22 patients came back one day later to do it all again. 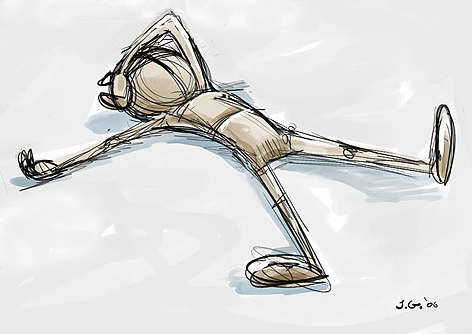 The most interesting measures were oxygen consumption and work output, a key measure of what people can actually do.

Work and oxygen consumption were measured at two key points: peak (usually just before people stopped from exhaustion), and at the anaerobic threshold. This is the point where normal aerobic (oxygen-burning) metabolism can’t keep up, so the body has to draw more heavily on anaerobic metabolism to make up the shortfall, resulting in accumulation of lactate in the blood.

For healthy people at least, the anaerobic threshold is roughly the point where it’s still just possible to talk normally while exercising. (Strictly speaking, Keller used the “ventilatory threshold,” calculating it from the ratio of oxygen used to carbon dioxide exhaled, but that’s approximately the same as the anaerobic threshold.)

The patients showed an average fall in day-two oxygen consumption of 14% at their peak and 16% at their anaerobic threshold. Work output fell by similar amounts: patients could do less on day two.

There were no controls in this study, but there are well-established studies going back to the 1950s showing that healthy people can reliably reproduce their performance (within 7%) on two-day tests. The far greater drop in ME/CFS patients indicates an underlying physiological defect, says Keller.

In fact, the results are even more striking for individual patients: while some show little to no change, some show very large drops, including one patient dropping 55% on day-two peak oxygen consumption. (It’s worth taking a look at the results diagram, Figure 3A in the paper, to see what’s really going on).

All patients showed a clinically significant drop on day-two, either for peak or anaerobic threshold oxygen consumption. 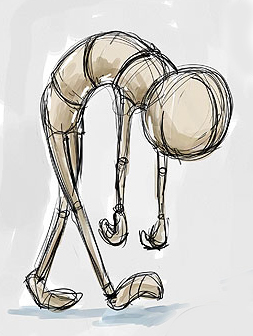 
The difference was big enough that half of the ME/CFS patients in this study would be classified as having lower functional ability on day-two results, and five of the thirteen that didn’t show any impairment on day one did on day two. This just highlights something very unusual going on with ME/CFS patients.

The results were so unusual, in fact, that it raised the possibility of faulty equipment. Though Keller didn’t run a control group, separate testing in her lab during the same period found normal results for healthy people, indicating equipment worked effectively.

Workwell included controls in their studies, and Chris Snell said this was mainly to prove the equipment was working (not to demonstrate that healthy controls can replicate performance on day two).

Perhaps these inconsistent results are not so surprising. A complex disease like ME/CFS is unlikely to yield its secrets so easily, and science is messy, especially in the early days.

A good example of messy findings came in the most important discovery in biology of the twentieth century: the structure of DNA.

X-ray diffraction images of DNA provided key evidence about its structure. Original images of DNA were clear in some parts but blurry in others, making them hard to interpret. This changed when X-ray expert Rosalind Franklin discovered DNA came in two types: A-DNA and B-DNA. (B-DNA simply has more water attached to it.)

The original images turned out to be for a mixture of A and B DNA. Separate images for A and B revealed the extra information needed to solve the structure of DNA.

Perhaps a similar scenario will play out in two-day testing, if studies are able to identify different subgroups, each with clear and distinct abnormalities – perhaps even a subgroup with none. Given that many researchers believe ME/CFS is likely to be more than one illness, it would almost be surprising if all patients did respond the same way to exercise.

Unfortunately, when you compare the results of the various studies, as Keller did in her paper, the story becomes considerably murkier.

First, let’s look at oxygen consumption. Keller’s result, in summary, was that every one of her twenty-two patients had a drop in oxygen consumption either at peak or at anaerobic threshold, but not necessarily both.

However, this last study also found a huge drop of 55% in work output on day two at the anaerobic threshold for patients.

This was especially surprising because the drop in oxygen consumption was far smaller at 11%, meaning that the patients produced much less work for each unit of oxygen. This inefficiency could point to some major metabolic change.

In contrast, Keller’s new study found a less dramatic drop of 21% in work. While that’s a clinically interesting result, it is broadly in line with the 16% drop in oxygen consumption at anaerobic threshold. It doesn’t suggest that the body is producing less work per unit of oxygen, the way the larger Workwell study did.

The Dutch study found a non-significant drop in work output of 7%, while work wasn’t measured in the first Workwell study.

Researchers have uncovered a very promising area for study. What’s needed to build on these findings and find out what’s really going on is further, more thorough investigation. Keller says we sorely need a much bigger study — and by bigger she means involving hundreds of subjects, which will come with a hefty price tag.

The bigger study will help clarify exactly what changes in response to exercise and for whom. It could even establish thresholds for measures like peak oxygen consumption that could then be used by clinicians in diagnosis. Such guidelines will be crucial if more patients want to take advantage of the test to help with disability claims, as currently only three labs in the United States carry out this work.

Keller is clearly disappointed by the lack of interest in these extraordinary findings from exercise physiologists working outside ME/CFS. She’s not sure why but thinks it may go back to training.

As in so many medical fields, exercise physiology undergraduates learn next to nothing about ME/CFS, while young researchers are deterred by a lack of funding for this area. As things stand, moving the field forward will fall on the shoulders of the existing small group of researchers.

What could be going on physiologically? 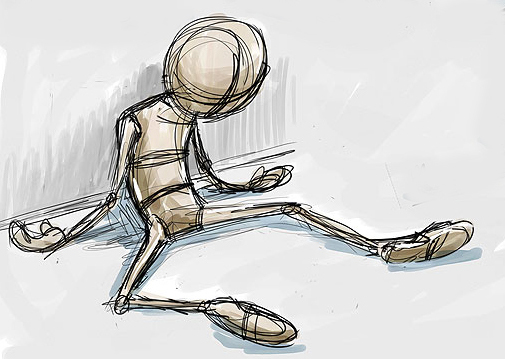 Given the mixed findings, it’s hard to know what is driving the problem. The reduced oxygen consumption suggests two possibilities.

Keller thinks that too little blood could be being delivered to the muscles, thus not supplying enough oxygen. There is some indirect evidence to support this, including a modestly reduced heart rate on day two in this study, indicating less blood is being pumped around the body.

Poor autonomic response, says Keller, could be behind reduced blood flow, and there is plenty of research showing autonomic problems in ME/CFS, at least for subgroups.

An alternative explanation is that muscles are simply unable to burn more oxygen, and a study by a Dutch group suggested muscle uptake of oxygen was the problem. The muscle problem in turn could be down to mitochondrial or other energy metabolism defects. Again, it may need careful identification of subgroups before researchers can really get a handle on what’s going wrong.

We don’t know if these findings are unique to ME/CFS, though it’s certainly unusual. This kind of maximal testing has been used frequently in diseases affecting heart and lungs (where all published results indicate they can reproduce results the second day).

Yet no published data exists on other fatiguing illnesses such as multiple sclerosis, HIV and rheumatoid arthritis. In a pilot study, however, Workwell reported normal reproducibility for one MS and one HIV patient. 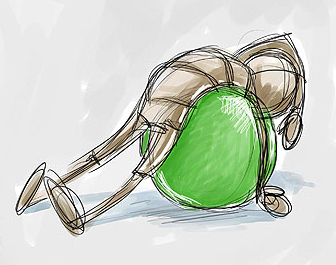 There will inevitably be concerns from some patients about taking a test that by definition pushes them to their absolute limits, and then does it again twenty-four hours on in the midst of post-exertional malaise.

Pushing beyond normal limits has triggered many a relapse, and sometimes patients never bounce back. But how big are the actual risks for a two-day test?

Keller says that most people in their tests report recovering to baseline in seven to 21 days, though some take longer. She also points out there is a lack of published data on long-term effects even for a one-day test, let alone two-day tests.

What’s needed, she says, is long-term follow-up looking at both symptoms and activity levels, to establish how long it takes patients to recover to baseline symptoms and activity. And she wants to use actometers (activity sensing devices) to ensure objective measurements of patient activity. This would also allow researchers to see if changes in patient activity matched the physiological changes seen on day two.

If these tests do cause extended relapses in some patients, they may never be appropriate to use for all patients in the clinic, even if they fulfil their promise to unravel some of the mechanisms of the disease. And in that case, there’s a cruelty in the new disability ruling. The only way that patients can prove their disability might be by risking making it worse.

The promise of exercise stress tests

To me, these are extremely interesting findings, because they have found substantial effects linked to the central feature of ME/CFS, abnormal response to exertion.

It’s not just these two-day tests either: in Utah, the Lights’ fascinating gene expression studies are particularly interesting as they only uses a single, moderate test to reveal differences between patients and controls. This is closer to real-world exertion by patients, as well as probably carrying less risk of relapse. The Lights’ initial findings have apparently been replicated in a larger NIH-funded study, but have not yet been published.

When researchers take different approaches to the same problem like this, and both find abnormalities, that’s usually a good sign. Clearly this isn’t a done deal yet, but the biological response to exercise is becoming an important new front in helping to unravel ME/CFS.