As the Whittemore-Peterson-Institute opens its door on what may be a new era of understanding and treating ME/CFS, it’s good to look at the circumstances that spawned the Institute. It was borne out of hope and possibility, for sure, both of which it has vastly exceeded but it was also borne out of trial.
The new century started off poorly for people with ME/CFS. First the federal CFS research centers closed and then both the NIH and CDC CFS budgets began to crumble. Eventually the CDC’s research program devolved into theories of sexual abuse, allostatic stress and metabolic syndrome while the NIH program, stuck in a little Office with no money and nothing but scores of broken promises, simply stagnated.
With wars and recessions draining budgets the big federal funders turned their backs on a disorder they never embraced anyway. With the federal research effort mired in inaction the biggest patient organization, the CAA threw most of its resources into research. It was a time that compelled small players to try to step onto the big research stage.

Dark clouds push some people to despair and inaction but they push others to act …. Something, after all, must be done… And so one day a mother woke up in the small town of Reno and said, just as the movers and shakers throughout history have always said; “If not me – then who? If not now when?” She had no special skills, no training –they rarely do – just a burning commitment to make a difference…..her time had come.

And now here we are just five years later with the realization of her efforts – the first Institute on ME/CFS opening its doors on the UNR Campus. For the first time a University has committed itself, lock, stock and barrel, to ME/CFS. Not only that but it has committed itself to an interpretation of the disorder – as a pathogen and immune centered disorder – which the federal government had completely rejected.

How ironic and how right that the first Research/Treatment Institute for ME/CFS is opening just a stone’s throw from ground zero. It was in Incline Village – just a stone’s throw away, that, in their first big confrontation with the traditional medical establishment, CFS patients and their supporters had decidedly been bested. Yes, Incline Village spawned a new recognition, dozens and dozens of support groups, major media articles, a major book…..but the aftermath was sobering… a derogatory name, fumbling and often inconclusive research efforts, a new emphasis on psychology and, over time, a dimming of commitment from both research and patient community’s.

Not long after the first blast of attention ,CFS, whatever its horrendous statistics, became a niche disorder, the purview mostly of people who had personal connections to the disease. The NIAID kicked the program out around 2000 – dooming it to languish in the embrace of a little Office that had never had responsibility for any disease, let alone as complex a one as ME/CFS. On the patient end, those 1000 or so points of light that the first Incline Village event had spawned across the US dimmed and winked out one by one. Ten years later you could count the number of viable, effective state organizations in the US on the fingers of one hand.

The entire landscape of ME/CFS, however, changed in late 2009 when the WPI findings jolted the research and patient communities awake. Suddenly big names like the Cleveland Clinic and the National Cancer Institute were being mentioned in the same sentence as CFS. Prominent researchers -even – Lasker award winners started studies, major Universities became involved., new patient groups sprang up overnight… and the battle, started in the little Village on the eastern slopes of the Sierra, never conceded, for sure, began anew with a new vigor.

Only rarely can you say one finding or one group has changed an entire field of endeavor yet that is what the WPI has accomplished before it’s opened it’s doors. Because of their work ME/CFS is viewed and discussed and examined in a way that it never has been before. Because of their work people awoke up with a new possibility and foundation for hope on a scale they could hardly have imagined.

Meanwhile an eerie historical justice appears to be playing itself out. This is ,really, after all Incline Village: CDC (ergo the medical establishment) Round II – twenty five years later. The sick patients and their supporter have returned but this time they have more than just their searing stories and more than just a few dedicated physicians. This time, thanks to Annette and Harvey Whittemore and others, they have their own lab and their own research priorities. 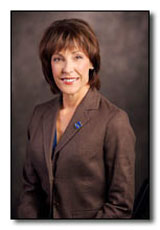 They are still so small… it’s still David against the Goliath – the little team working out of rented quarters against the gleaming labs of the world famous CDC and others. It should be no contest, really… big medical discoveries do not come out of Reno …but this time they have some friends – some big friends on their side – and most importantly, this time it appears they may have the science, as well.

We have far to go to know if XMRV will work but we do know that it has engendered hope beyond what we could have imagined. VP Mike Hillerby said no one involved with the WPI, Annette Whittemore included, could have dreamed things could have come so far so fast. Indeed, as with most major finds XMRV took work and commitment and a bit of serendipity to come to pass. At times, though, the Universe drops a big gift on a beleaguered community and chooses a few people to be responsible for it. This time it dropped that load on a few committed people working in small lab in Reno, Nevada. They were there because one woman woke up one day and decided that she would make a difference.

Here’s to the Whittemore-Peterson Institute making a difference and continuing to make a difference as they open their doors for the first time.