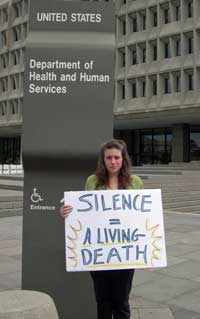 (With so much happening and so much at stake, Rivka reminds us that now is the time to act)

Dear Everyone Who Cares About People With ME/CFS,

I just held my one-woman demonstration at the Red Cross national headquarters in Washington DC (Red Cross collects 45% of all blood donations in this country) and at the national headquarters of the U.S. Department of Health and Human Services, and it was a success. (see her video below)
On the first day of our protests, August 13, 2010, our first stop was the Red Cross headquarters. Lots of security showed up within minutes of me being there, but I simply educated them about XMRV. :-)

This is how it went: My mom and sister (respectively the videographer and designated driver) started videotaping me standing in front of the front door while people were walking in and out of the building. A security guard walked up to me within two minutes and said I could not videotape and hold my signs there. I said “What about over there?” pointing to the sidewalk, not five feet away, but still in front of the door. She said she could not stop me from doing that. So I stepped five feet forward and proceeded with my sign holding and talking into the video camera.

Her supervisor showed up a few minutes later and and spent all of his time on a cell phone describing to someone else what I was doing. I stopped the videotaping and turned around to ask him, “Who are you talking to?” He told me he was talking to his director. (The director of what, I wondered.) So I asked if he wanted me to talk to the director and tell him/her why I was there, protesting. No, was the answer. So I said, “Do you want me to tell YOU why I’m here? Would you like to see my signs?” (Who wouldn’t? They are so colorful!) Yes, he said.

So I told him about how long I’ve been sick (20 yrs) with CFS and how, finally, scientists may have found the potential cause of my illne

ss, a new retrovirus called XMRV, and that it may already be in the nation’s blood supply infecting new people who get blood transfusions. I told him how I was there to ask the National Director of the Red Cross to check the blood supply for this retrovirus.

As this went on, lots of people were walking by and many slowed down to read my signs.

Both the security guard supervisor and the original security guard seemed genuinely interested, and the supervisor relayed all this info to his superior via his cell phone. Now done, I went back to my protest and holding of signs for my mom who was still at the video camera.

A few minutes later, I noticed an older man in a more professional suit-type of uniform watching me from another door. In fact, I now saw that there were a total of four security guards hanging around at different spots along the block. I asked the suited man if he was security. He did not reply. So I asked again, and he mumbled something. So I asked if he wanted to know why I was there, and when he said yes, I shared my story all over again, asking him, too, to tell the Red Cross Executive Director that I was there with my signs to ask for the nation’s blood supply to be checked for the new retrovirus XMRV, and to screen all donations for this virus, and that I did not want anyone else to get sick like I have been for so many years. 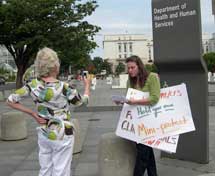 After I was done, the older suited man, an African American, said, Like Arthur Ashe. “Who?” I said. Arthur Ashe, the tennis player, he repeated. He got HIV from a blood transfusion and died of AIDS, he said. “Arthur Ash!” I suddenly recalled the African American international tennis superstar and racial barrier breaker. “Yes, exactly!” Then the security director for the Red Cross (anyway, that is who I think he was) wrote down “XMRV” on a piece of paper so that he would remember the exact name to tell the head of the Red Cross, and we said goodbye. I finished up my videotaping and my mom and I moved on to the national headquarters of Health and Human Services, a few miles away.

There, it was a different story. This huge building is across the street, literally, from the U.S. Capitol Building. We were going to shoot the video by the HHS sign near the street, on the sidewalk, but it started to rain, so we ran to the building’s front door and under the cement overhang. Security was super tight. We were there for about half a minute, getting in place for the shoot, when a security guard said we had to stop. I asked why. She called her superior and about three guys showed up. The head honcho told us we could not shoot the video if the camera was facing the HHS building (and what was the point of shooting the video there if it wasn’t?). We were told to move. Period. We did. Nothing. We got nothing on video. But I did ask the head guard to be sure to tell HHS Director Kathleen Sebelius why I was there: To request more funding dedicated to ME/CFS and XMRV. I wish I had brought him a letter to give her. Next time! 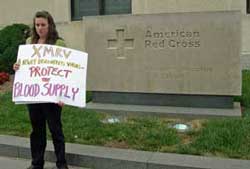 That night, reviewing the less than perfect Red Cross video made it clear we needed to go back. We decided to consider that day’s efforts a practice run. So my mom, her partner and I drove back the next day, a Saturday, and we shot it all, all over again — this time in front of the HHS sign by the street and back in front of the Red Cross. No problem, after all, we were on the sidewalks this time. All legal.

My reason for doing these demonstrations — my goal — is to inspire other one-person demonstrations around the globe. Larger demonstrations are too hard to organize, and so many of us can only go out on a random day that we feel strong enough. So in my mind, these mini-protests are a good idea. If we can have dozens of these around the globe — and get media attention for it — we may be able to impact the political situation that has dictated our lives for so long. Hold your own mini-protest in front of your town hall, government offices and blood banks. Let’s cause some waves, get some press attention, and get some clinical trials and funding for ME/CFS and XMRV research.


FOR THOSE WHO CAN NOT LEAVE THE HOUSE TO PROTEST (and there are many of us): Please consider emailing HHS Director Sebelius the below note I wrote to her asking her to increase funding for ME/CFS/XMRV research and clinical trials. She is reachable here: 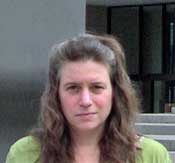 With hope for our future,
Rivka
Rivka (at) ThatTakesOvaries.org

It has long been a tradition of our democracy that when a people feel their needs and concerns are not being heard by their government they will demonstrate and protest.

This is a tried and true tradition of any democracy.

If we can have 100s of these mini-protests, like mine (of one, two or five people), happening around the country and globe, in front of our government offices and our blood donation centers and blood banks, we may cause some waves, get some press attention, and get some clinical trials and funding for ME/CFS and XMRV research.

Remember, protests and demonstrations — holding up a sign in a public place stating your views — are part of the democratic process. Let your voice be heard!

I have spend way too much of the past 20 years bedridden and homebound with Chronic Fatigue syndome, an illness with a belitting name for a disability so severe.

According to the Centers for Disease Control there are 1 to 4 million Americas like me, all sick with ME/CFS.

Every year of the past 20 yrs, I hope and hope that my government will do what a government is supposed to do, and help its people — help me. But every year I am deeply disappointed.

The National Institutes of Health, the NIH, invests $31 billion dollars annually in medical research for the American people. But of that $31 billion, in 2009 CFS research got $5 million — about the same as what the NIH dedicates to Hay Fever, and about a 1/3rd of what is dedicated to Psoriasis.

Now, with a newly discovered retrovirus called XMRV that is linked to — and perhaps the cause of — CFS, we have an even greater reason to stop ignoring the 1 to 4 million Americans who are so sick, so desperate and so in need of help.