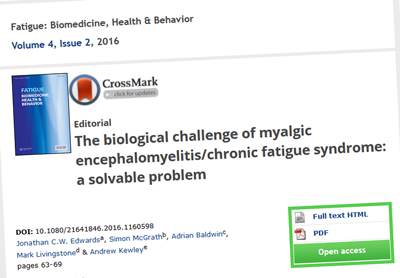 Recently, Professor Jonathan Edwards, with patients and carers as co-authors (including me), published a peer-reviewed editorial in the medical journal Fatigue: Biomedicine, Health & Behavior. The article became their most-viewed paper within a few days.

The editorial highlights some of the most promising biomedical research on ME/CFS, discusses possible broad models to understand the illness, and suggests practical steps to speed up progress.

Our paper is a direct call to the wider biomedical research community to actively target ME/CFS, but we hope that patients will also find the paper useful as a summary of current theories about what causes the illness, and some of the most promising research leads right now.

However, some of the language of the paper is inevitably quite technical, so below I provide a more patient-friendly version of the paper that has been agreed upon by the authors. It omits some of the most technical bits and explains some important concepts where helpful.

ME/CFS is similar to multiple sclerosis, diabetes or rheumatoid arthritis in terms of the proportion of people affected (about 0.2% to 1%), long-term disability, and quality of life. However, the recent National Institutes of Health (NIH) and Institute of Medicine reports show that biomedical research and funding have been pitifully limited.

We hope that the NIH’s increased focus on ME/CFS, announced by Director Francis Collins, will attract many more researchers and more resources, but even with the scant funding so far, ME/CFS researchers have already generated promising leads.

In our paper, we suggest the key elements of a coordinated research programme and we call on the wider biomedical research community to focus on this condition.

Patients desperately need treatment, so treatment studies appear to be a good place to start. Researchers can stumble across possible treatments, as Dr Øystein Fluge and Professor Olav Mella appear to have done when they noticed that B-cell-targeting cancer medications also helped ME/CFS patients: this eventually led them to conduct a large multi-centre clinical trial of rituximab for ME/CFS.

Drawing on the experience of our lead author, Professor Jonathan Edwards, in understanding the mechanism behind rheumatoid arthritis and its application to treatment (rituximab therapy), we use a broad “systems” approach.

This means that we consider how various parts of our complex biology interact with each other and with things in the environment, such as viruses, bacteria and toxins, in a big system.

One important possible cause of illness can consist of “stochastic” (random) factors. Stochastic factors are very important in cancer, where random mutations in DNA accumulate over time, and sometimes, by sheer bad luck, those mutations happen in particular series of genes that drive cells towards becoming tumours.

But the potential role of such random factors in diseases other than cancer is often ignored, though they play a role in rheumatoid arthritis too, where random generation of antibodies, and more bad luck, leads to auto-antibodies that attack the body (see box).

This could also apply in ME/CFS, either leading to auto-antibodies (which could explain the apparent success of rituximab, which wipes out antibody-producing B-cells) or some other mechanism driven by random factors.


Making antibodies by random events – and the problem of bad luck

Humans can make billions upon billions of different antibodies, each recognising a different molecule, but we do this with only hundreds of antibody genes. How?

The body has a remarkable ability to mash up the small number of different antibody sub-genes into a vast set of new combinations, and does this throughout our life.

Critically, this gives us the ability to produce antibodies even against bugs we (or our ancestors) have never encountered before. However, because it’s a random process, inevitably some of the antibodies, known as auto-antibodies, will end up being able to attack our own bodies. Normally, the body destroys these before they can do any harm.

Sometimes, due to bad luck, the gene-mashing that is responsible for a continued fresh supply of new antibodies can throw up auto-antibodies capable of evading destruction — and these can attack the body, leading to diseases such as rheumatoid arthritis.

Epidemiology — the study of who gets what illness, when and where — also provides several clues as to what aspects of the system may be involved in ME/CFS. The most striking is the high proportion of women with the condition — typically 75%.

And there is evidence that people are most likely to fall ill with ME/CFS at two stages in life — adolescence and mid-adulthood — suggesting people might be particularly vulnerable to triggers of ME/CFS at certain ages.

ME/CFS can run in families, and sometimes the illness starts with an infection (occasionally during an epidemic). Examples are the Epstein-Barr virus (EBV, which can cause glandular fever), Ross River virus and the bacterium Coxiella burnetii, which causes Q fever.

It seems possible that either prolonged infection or long-lasting exposure to damaging environmental factors such as toxins, together with stochastic factors, could upset our bodies’ ability to regulate themselves and shift us from a stable, healthy state into a stable, dysfunctional, diseased state that keeps us sick.

The fact that some people do improve substantially, either spontaneously or following treatment, supports the idea of a shift to a dysfunctional state rather than one of permanent damage.

Notable research findings that give clues to mechanisms include the following.

(iii) Evidence that the autonomic nervous system is involved

Crucially, these findings have not been replicated robustly enough to provide firm anchor points for further research. Lack of funding may have been an important reason for this, and perhaps also the use of ill-defined or varied groups of patients in the research. In this context, it is interesting that Dr Mady Hornig’s team found that levels of cytokines in blood plasma differ between ME/CFS patients who have been ill for fewer than three years, and those ill for longer.

Our paper highlights several different models as potentially useful frameworks to understand and study ME/CFS. All of them take a broad systems-analysis approach, assuming that a “hit and run” event could have knocked patients’ regulatory systems into a new, diseased pattern.

Searching for a new microbial trigger may be productive, though no particular microbe seems associated with the illness.

The central problem for any model is to explain the ongoing physiological disturbance.

This, together with the symptoms of cognitive and other global problems, such as pain and fatigue, suggest that it’s likely that the central nervous system plays a key role, plus or minus the immune system. Both systems have extremely complex regulatory systems and so both are strong suspects. The autonomic system, which controls subconscious processes such as breathing, circulation and digestion, is another possibility.

Some researchers have suggested that general metabolic abnormalities including problems with energy metabolism might be key. There are some intriguing findings such as those from Professor Julia Newton’s group, but it’s hard to explain how cells or mitochondria throughout the body would simultaneously acquire abnormalities. It’s more likely that such abnormalities result from problems with control mechanisms for body-wide systems.

Three general models seem most interesting and each one is defined in broad terms that may apply to several different specific mechanisms.

Model 1. The brain is responding normally and symptoms are due to ongoing abnormal signals from the body

The signals could be cytokines being produced as the result of long-term problems with the immune system — problems that could be caused by autoimmunity, or even low-grade chronic infection.

The finding that 67% of patients improved with rituximab therapy, which depletes the immune system’s B-cells, needs confirming – but indicates that problems in the immune system could be driving symptoms. Likewise, the gene-expression changes and the abnormal physiological response to exercise also suggest the body is responding abnormally. Two research groups are currently looking at the gut microbiome as the possible ultimate source of the abnormal signals.

Model 2. Signals from the body are normal, but an ongoing problem with the brain leads to it responding abnormally to create symptoms

For example, a “hit-and-run” initial infection could lead to ongoing activation of microglia even after the infection has cleared, and the activated microglia could then cause the brain to over-react to normal signals coming from the body.

Immune activation in the body can influence the microglia in the brain, with the “sickness response” — a biologically-driven set of symptoms in response to infection, such as depression, loss of appetite and sensitivity to pain — as a stereotypical example (which overlaps with ME/CFS symptoms). Microglia have been implicated in several neurological disorders as well as in animal models of fatigue, and a recent study using brain scans indicated activated microglia in ME/CFS patients.

Model 3. There are ongoing problems in neural pathways that lead to distorted signalling

This could be due to abnormal levels of neurotransmitters as seen in Parkinson’s disease, or problems with the physical pathways themselves, either in terms of structural changes to the central nervous system after an acute infection or injury, or changes in how it is regulated.

These three broad theoretical models might overlap, with different models applying in different subgroups of patients. However, it’s quite possible that all models share a common biological pathway that causes exertion intolerance, as well as some other symptoms. The models are a start and need testing, but show that there are several possible ways of understanding the illness physiologically that are well worth exploring further.

Identifying the biological basis of ME/CFS won’t be easy but, with several promising findings, there is a real opportunity to make progress towards treatments based on understanding the disease. Several areas seem particularly promising to study:

We also suggest ways to improve how research is done, to get better, more reliable results:

In summary, the current outlook for patients is poor. We still don’t know for sure what drives the illness, although the brain certainly seems to be involved. There may well be subgroups with different underlying diseases requiring different treatments. We urgently need much more biomedical research into ME/CFS to provide hope for better treatments.

We are grateful to Phoenix Rising for providing us with facilities for collaborating on this paper.

Note: This more readable version is provided for convenience, but please refer to the full text for the definitive version of the editorial.