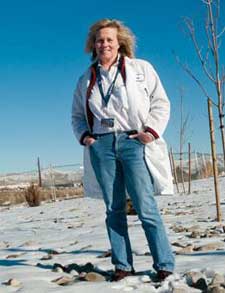 Dr. Judy Mikovits has had a difficult couple of months. First the BWG study indicated the tests she developed for XMRV were not valid, then evidence of contamination resulted in a partial retraction of the original Science paper, then she was accused of doctoring a photo at a conference and in the original Science paper prompting several investigation, then she was terminated from her job at the WPI, then she was served with a lawsuit claiming that she had stolen data from the WPI and since last week, she’s being in the Ventura County jail waiting arraignment as a fugitive from justice. She must be wondering if it could get any worse. It has -but first some background.

The latest episode began with a lawsuit filed by the WPI a month after Dr. Mikovits termination claiming that Dr. Mikovits had taken critical notebooks and flash drives from the WPI after she was fired. According to ScienceInsider Dr Mikovits had the only key to the desk the notebooks were kept in. After Dr. Mikovits termination the WPI had the desk manufacturer open the desk for them and found it empty of her and other researchers notebooks. A source at the WPI said that it was her understanding that Dr. Mikovits desk had been ’emptied out’ and up to five years research data was gone. They then served notice of the theft to the police and a police investigation began.

Why are these laboratory notebooks so important? Because they serve as the document of record in scientific research and are specially manufactured and used in specific ways…..

WIKIPEDIA – A lab notebook is a primary record of research…..To ensure that the data cannot be easily altered, notebooks with permanently bound and numbered pages are often recommended. Researchers are often encouraged to write only with unerasable pen, to sign and date each page, and to have their notebooks inspected periodically by another scientist who can read and understand it. All of these guidelines can be useful in proving exactly when a discovery was made, in the case of a patent dispute.

After several failed attempts to get the materials back the WPI filed a lawsuit a month later to compel Dr. Mikovits to return notebooks, flash drives, information on her laptop computer and information in her email account. In a blog titled “Wings of Hope: Our Responsibility” the WPI stated that the failed efforts to get the materials back forced had forced them to engage in ‘costly litigation”. The data loss included 12-20 notebooks dating back five years. The WPI stated that” the costs of legal action pale in comparison to the years of expenses incurred for researcher salaries, equipment, and supplies to generate this valuable work”

(Dr. Mikovits contract stipulated that all intellectual property she produced while under the employ of the WPI was the property of the WPI.) The WPI also won a temporary restraining order stopping Dr. Mikovits from “destroying, deleting or altering’ any of the materials that may be in her position.


For her part, through her attorney Dr. Mikovits stated that she received notice of her firing on her cell phone and then immediately left for her home in Southern California without visiting the Institute again. She stated she had placed her keys in unlocked drawers in her lab as was her custom so that other lab personnel would have access to the notebooks. Her attorney stated that

Dr. Mikovits was not and is not in possession of the lab notebooks or any WPI intellectual property. A number of individuals have keys to the office and lab, including the administrative staff, lab staff and custodial.

Instead of Dr. Mikovits returning the materials her attorney requested that her notebooks be returned to her so she can continue to work on the grants she won while employed at the WPI. Her attorney stated that

Dr. Mikovits’ notebooks, as well as those of the employees whom she supervised, should be returned to Dr. Mikovits so she can fulfill her responsibilities as PI on these government grants and corporate contacts.

The WPI lawsuit does not request just the return of the materials; if found guilty it also requests that Dr. Mikovits be liable for attorneys fees, punitive damages and other damages to be proven at trial – potentially leaving Dr. Mikovits with a substantial financial burden if the WPI prevails.

Research Assistant Confesses Theft – in a legal filing pertaining to a preliminary injunction against Dr. Judy Mikovits the Whittemore Peterson Institute provided evidence late last night that Dr. Mikovits engineered the theft of the research materials from the WPI lab after her termination.

In an affidavit Max Pfost, a researcher working at the Max Pfost, admitted that he removed the documents/flash drives at Dr. Mikovits behest the morning after her termination. According to Pfost’s affidavit, upon hearing of her termination Dr. Mikovits called him and told him that the WPI would ‘go down’. She then met him in a bar and provided him with the keys he needed to take ‘patient samples’, lab notebooks and other information.

Pfost attempted to gain entry to the WPI that night but was unable to and entered the building the next morning when it was unlocked. Pfost then removed between 12-20 heavy notebooks containing approximately five years of research work from Dr. Mikovits, Pfost and two other researchers. Unable to fit all the notebooks into his backpack Pfost carried others out in his arms to his car and then to his apartment where he hid them in a “Happy Birthday” bag. Realizing that the WPI was searching for them he then moved them to his mothers house.

Dr. Mikovits requested that he mail them to her at her house but Pfost protested that the size and the weight of the notebooks made them too expensive to mail. After confessing to his mother that he had stolen the notebooks Pfost removed them from her house and returned them to his condominium.

Mikovits In Hiding – Shortly after meeting Dr. Mikovits early in the morning at the Reno airport Pfost handed over the notebooks and other materials to her. Dr. Mikovits informed Pfost that she was hiding out on a boat to avoid being served papers by the WPI and requested that he inform her of the whereabouts of WPI employees to avoid detection.

Attempted Removal of Biological Materials as Well – According to the affadavit Dr. Mikovits also attempted to have biological materials including cell lines and blood samples removed from the labs as well. At Dr. Mikovits behest Pfost attempted to recruit other WPI employees to remove these materials from the lab and send them to Dr. Ruscetti. According to the affidavit research assistant Amanda McKenzie, declined to do so.

The Stolen Materials – A WPI filing asserts that the WPI uses the stolen materials on a ‘daily basis’ and cannot proceed on critical areas of research without it.

Law Enforcement in Charge – A misunderstanding has arisen about the WPI’s role in Dr. Mikovits arrest. When the WPI realized important documents were missing they reported the theft of the materials to the police. At that point a police investigation was launched; based on the facts of that investigation and the lawsuit filed by the WPI, the Judge overseeing the case produced the initial restraining order stopping Dr. Mikovits from altering or destroying the documents. On Nov 17th a warrant was issued for her arrest and she was arrested last Friday. Dr. Mikovits fate is now in the hands of the legal system. The police will determine whether or not to bring charges.

Felony Theft – If Dr. Mikovits has the documents she certainly has good reason to return them. The WPI’s lawsuit, which was filed over a month ago, asked for legal fees, punitive damages and other damages.

Furthermore Dr. Mikovits has been charged with two felonies; avoiding justice and stealing property from the WPI. In the state of Nevada the market value of the product stolen determines how a theft is classified. Thefts above $250 are considered felonies; thefts above $2,500 are considered ‘grand theft’ and are punishable by 1-5 years in jail and up to $10,000 in fines. According to the affadivit the documents in question represent 5 years of work.

A hearing is scheduled today in Nevada at 1pm PST regarding the preliminary injunction which will expire after today.