I should note at the outset that this review is based on an audio version of the galleys and the epilogue from the finished work. Julie Rehmeyer sent me the final version as a PDF, but for some reason my text to voice software (Kurzweil) had issues with it. I understand that it is only the epilogue that was significantly changed between these two versions. ~ Richard7 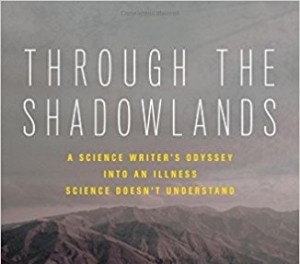 When I offered to review this memoir I did not quite grasp that it was a memoir. I had focused on the author’s name Julie Rehmeyer, which I recognised, and the subtitle “A science writer’s odyssey into an illness science does not understand,” and assumed that I was offering to review a work of science journalism.

Which would be cool. If someone wants to read all the science, interview all the researchers, synthesise an explanation of the state of scientific knowledge and ignorance and then write that book: I want to listen to it.

True to my misinterpretation of the subtitle, the book does describe some of the science and the politics around the science.  The part on PACE is good as one would expect as the author has written about PACE elsewhere. There is also a section on the state of the science of human exposures to environmental mould and how political influence seems to be shaping it, which is good, familiar and depressing.

But this is essentially a memoir of a science writer who has ME/CFS, and it filled a need I did not know I had.


Rehmeyer’s story of getting and trying to deal with ME/CFS fits within the range of stories I have read on Phoenix Rising. She pinpoints a day where she did not seem to have recovered properly from her exertions. She saw her doctor and raised the possibility of CFS but as she was under a lot of stress and doing too much it did not exactly seem to be unexplained fatigue.

She then did all of the seemingly sensible things, rested, changed her life as best she could and tried to rebuild her health. The rest did not seem to help. Like many, perhaps all of us she had the wisdom that the BPS school seem to think we lack and worked up gradually in her exercise expecting that her capacity would increase over time.

But what seems like wisdom to the well proves ill wisdom in the face of this illness. She got worse: going from running slowly and having trouble cycling uphill to becoming stranded in the kitchen unable to climb the stairs back to her bedroom.

She continued doing the sensible things: seeing doctors, getting advice and following it and learning from her mistakes. She had the normal enough for ME/CFS experience of finding that very little of it really helped, or rather that it helped make life liveable but did not help her get back to normal health. She had remissions and relapses, some good days and days where she could not manage to turn over in bed.

Then about a dozen years into her ME/CFS she learned about mould as a potential problem and decided to test it. She did some blood tests, but the real test (vastly simplified) was to leave all her possessions behind, camp in the desert for a couple of weeks and then see if she reacted to her possessions when she returned. She did.

So she avoided mould and did what she could to aid her detoxification pathways, and entered a  rather strange state in which she was in remission most of the time but her reactions to exposures to mould made her sicker than she had been before her remission. Over time this improved and today she says:

“At times, I’m close to 100 percent well—consistently feeling good, able to exercise as much as I want, and reactive only to the worst buildings—but other times are more difficult. During those difficult times, caring for my body requires significant effort and caution, but even then I’m able to live a full life, and I no longer would consider myself disabled. I continue to experiment on all levels—avoidance, detox, medications, psychological work, woo-woo experiments—to figure out what will restore me.”

Unlike most of us, she was able to see a reputable CFS doctor (Nancy Klimas). She owned a house she could rent out and worked freelance and seems to have been in a better financial position than most of us: there is a point in the book where she wonders about becoming poor enough to qualify for social security.

I would think that most people with her severity of ME/CFS live in that sort of poverty. She had help from a lot of people: some of them friends and some who were strangers. But in the end she sees it as luck that she was able to find something that worked for her.

She does not see mould avoidance as a general solution to ME/CFS.

“I have intensively counselled around 10 ME/CFS patients who have tried mold avoidance, and all became persuaded that mold exposures contribute to their symptoms at least somewhat. Some have experienced remarkable improvements, though none have improved as much as I have. Some have found it to be a valuable tool, but it hasn’t been transformative. Others have concluded that while mold indeed worsens their symptoms, the benefits they experience from extreme mold avoidance aren’t sufficient to justify the extreme effort and disruption it requires.”

This seems to fit in with my understanding of the science. We know that blood cells from normal people behave like ME/CFS cells in ME/CFS plasma. So the thing that flips the CDR switch in  Naviaux’s model (if the model is right) seems to be in our plasma, and it seems that there are a lot of things that can cause us to release that substance: viruses, chemical exposures, and so on. Mould or micotoxins are just the ones that were an issue for Rehmeyer.

Rehmeyer has not written that mould caused her ME/CFS. Indeed, from the book it would seem unlikely. The house that she was building when she became ill, and which she then lived in during the early years of ME/CFS is mould-free. If one assumes that the chemical warfare model of mould avoidance is the right one, the fact that the house is OK now must mean that the house and its contents were OK in the past.


So if mould was the problem in 2000 -2005 living there should have had the same impact on Rehmeyer that camping in death valley did. Of course mould is understudied, and we do not really know if this model is right.

But the way in does not have to be the way out. One thing could have triggered the switch and another could have kept it triggered. Once we have ME/CFS we are after all easy prey to infections, and likely to have problems with detoxification, digestion and anything at all that requires energy.

From the “what does this tell us about ME/CFS?” point of view, this book has really made me think about environmental factors. Some of you may know that I have been trying Dr. Osamu Hotta’s approach to nasopharyngeal inflammation. Briefly, Dr. Hotta tested 41 patients with post HPV vaccine CFS for nasopharyngeal inflammation and found that all 41 had severe inflammation. 16 were then treated in hospital and 13 of those 16 had marked improvement 4 going on to be cured.

I do not know what was holding those patients in ME/CFS. It may been the exhaustion of everyday life with ME/CFS or environmental factors such as mould or allergens. If so, it may have been the change in environment, being cared for in the hospital, and not the twice daily nasopharyngeal ablation that made them better. Or a combination of the two. Or not. Rehmeyer’s experience just makes it clear to me that environment is something to keep in mind when reading research.

This factor also reminded me of a blog post by Ken Lassesen in which he called for sanatoriums for people with ME/CFS.

But the above, the science, was what I was expecting. It was certainly worth reading and thinking about. I had not looked into mould before and felt after reading the book that I would happily make a pyre of all my possessions if it would get me out of this mess.

The unexpected thing was the importance of representation.

We are all in the position of having to explain ourselves to people whose expectations we cannot meet: family, friends, employers, doctors, the wider community and ourselves. If we read a book or watch TV we see a view of the world that works on assumptions that do not allow for ME/CFS. Whatever pearls of wisdom they contain come from a world that is alien to our own. Whatever daydreams they may inspire will involve selves that are not much like us, living lives that are not much like ours.

Listening to this book about another person’s life in another country I was surprised to find I was more at home than I would be if I was hanging out with friends or family listening to their stories of happenings in their lives. For that strange and welcome experience alone I would suggest reading it.