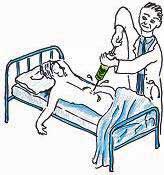 I’d contacted Dr. Ravindran earlier and mentioned I was coming out to DC but we fell out of contact and I assumed my chances of getting the study in while I was in town were nil. It didn’t help that I waited for several days before I called but several hours after I called to tell him I was in towns there I was in the research wing of the hospital giving blood, whooping it up doing pulmonary tests and scrunching my arm muscles while Dr. Baraniuk aimed this weird horn at my nose.

As the tests dragged on past normal business hours the research section of the hospital emptied out. When Dr. Ravindran, Dr. Baraniuk’s delightful assistant, locked his keys in a room, security guards were called to open up the door. We were finished long after normal operating hours were over. A couple of days later there I was spread face down on a table getting my spinal fluid leached from my system; these researchers were very eager to get CFS patients in there.

First Part of the Test: The first part of the exam included blood work, a pulmonary test, a rather bizarre nasal test and a muscle test. Most of these are focused on autonomic nervous system functioning. After all the whooping required in the pulmonary test Dr. Baraniuk stated that for the great majority of patients the first day, not the spinal tap, was the most difficult part of the study.

This study included the following test:

The Spinal Tap – The spinal tap came with a 24 hour stay, a saline IV and a 24 urine creatinine test. I was told that the specialists administering the test used very small needles. I had several characteristics – a good spine, no history of headaches or migraines – which suggested I would sail through the tap. I was told that I would probably experience more pressure than pain.


The no pain part didn’t pan out for me (although I have heard from others for whom it did). My lower back was sore anyway and getting into the position was bit painful. I had been well briefed about the dangers of the spinal tap before but being presented with a consent form by the ‘spinal tapper’ in the ‘operating room’ literally seconds before the test was run stating didn’t do anything to calm me down. ( I remembered having to sign the same form as I was being wheeled down the corridor as I was about to go under the knife for surgery.)

When an assistant asked if I was nervous I replied “No” in what turned out to be a falsetto voice. Well, maybe a little bit.

The ‘surgeon’ was rather brusque, he quickly prepared me, gave me a local anesthetic (a nice sting) and without a word, began to search for my spinal fluid. The spinal tap does not penetrate the spinal cord – it gathers spinal fluid some distance below the spinal cord where it is being filtered into the body. He had trouble finding it. The first stab was somewhat painful but the second, third and fourth got worse and worse. He finally hit the spot – I was about to hit the roof – and the pain lessened. As he was jabbing around a big muscle leading from my hip downwards cramped up as well. I was able to adjust my posture after he finally hit the spot and felt better.

I was hooked up to the IV line for 20 minutes or so as they drained all the spinal fluid from my back (:winking:). They wheeled me in gurney back to the room. I was helped quickly to bed and given instructions – no standing if possible, no stomach crunches, no pushups, the afternoon jog was out …darn.. After it was over besides some mild pain at the site of the insertion I was fine – in fact I was feeling better than I had in quite a while. My body felt relaxed, my mind felt clear…this I felt, I could do every day. It turned out that the spinal tap revealed that I had increased spinal fluid pressure – which is one of the things they were checking. One theory is that increased spinal fluid pressure puts pressure on the nerves thus disrupting functioning.

I spent the night at the hospital and felt little or no pain. I’d done this at the last minute and my cross-country flight was the next day. Dr. Baraniuk had offered to try to get the airline change my ticket to a day or so later but I demurred – I thought I would be OK. I was after all a good candidate to blow right through this thing – no history of headaches and a nice spine (so I was told the X-rays revealed). Besides how bad could a headache get? Really?

The Trip Home -When I stood up I had a mild headache but then there was the bus trip to the airport and my heavy duffel bag and that one overhead rack. As I lifted the heavy bag to the overhead compartment I was flooded with nausea. I made it to the airport (barely) and checked my bags but at that point even lifting my laptop me nauseous. Dulles is not a user friendly airport – it required plenty of walking (fly into Reagan Airport if you can). I thought I was going to have a horrific trip on the plane but I actually did quite well. The next day I was nauseous on and off.

A day or so later I learned what a bad headache was really like and I was down for a couple of days. Just as I began to consider that this was maybe permanent state (it didn’t take long ) the pain started to lift and once it did it lifted pretty quickly.

Besides my unfortunate travel plans (Dr. Baraniuk now has a no-fly next day rule) my problem was probably those 3 or 4 sticks the surgeon gave me in the spine. Dr. Baraniuk was quite upset at those four sticks and told me he would complain to the hospital. Each of them opened a small hole that the cerebral spinal fluid could leak through. When that happens the CSP fluid levels drop in the head causing a headache. I then exacerbated that problem greatly by lifting way too much way too early. If I stayed in DC the extra day or two lying down I would have been much better off. As it was, once the ‘trauma’ was over it was completely over – no long lasting effects.

Conclusion – My stay at the hospital itself was excellent. The two doctors were very attentive to my needs and very willing to stick around and chat about this disorder. There was that headache but there was that $400 check to look forward to as well.