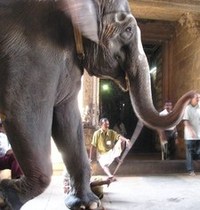 We’ve all known people we’d prefer to avoid. People who make us want to run the other way when we see them coming, because they do nothing but complain. It galls me no end that there are people who react this way to me if I talk about what life with ME/CFS has done to me.

Llewellyn King’s White House Chronicle blog helps to alleviate a bit of this for me. He writes about us with some understanding and concern about the devastation we deal with. King seems to sympathize with the secondary affliction we are faced with as well — the stigma of being seen by healthy people as lazy, lying or stupid.

In his January 2, 2012 blog, ME/CFS: Into 2012 without Cure or Care, King talked about similarities and differences between both the history and present-day of AIDS and of ME/CFS. He said, “There are parallels as well as dissimilarities to the early days of AIDS. For AIDS, the stigma was sexual; for ME/CFS, the stigma is sloth.”

Sloth. That’s a word that carries some impact. Now, I’ve known this to be the case since the early days of my condition. Felt it around me long before I could put it into words. But for some reason it hit me hard when I read this in his recent blog. I also felt an odd sense of relief and appreciation upon hearing this person who does not have ME/CFS talk about it in this baldly blunt yet affirming manner.

This stigma has been for many of us the elephant in the room that people don’t talk about. It takes up all our space and steals all our oxygen. We read the unspoken message in the averted gaze or the quick subject change, the tacky joke from some healthy person who wishes they could lay around doing nothing all day.

The medical community has contributed to this surreal experience as so many in that community contend that this is a psychological condition. If we would just apply ourselves to healthy changes and stop being couch potatoes, we would discover that there wasn’t anything wrong that a little gumption wouldn’t fix.

This should have an effect similar to a fire alarm, or a shrieking siren. It should prompt a response of shock, a sense of urgency and immediacy that something needs to be done.  But … instead it’s as if we hadn’t spoken at all, the subject is changed and we are abandoned, told our grief is insignificant, once again.

Our words seem to go through some kind of transformation that twists their meaning. Coupled with our ragged demeanor, the lack of standing, and the constancy of our sitting and lying down, what our hearers perceive is that stigma that we are lazy, stupid or lying.

When we feel brave enough, have enough strength on some days to really spell out what torments we deal with, sometimes the response we get can only be described as embarrassment. Embarrassment for us that apparently we don’t know how to act. And embarrassment for themselves as they’d really like to get away and not have to give it to us straight. If we’d just quit griping and get on with life like everybody else, everything would be fine.

Our listeners may feel that they’re being forced to attend a pity party full of excuses and rationalizations. Perhaps we seem like teenagers trying to avoid our chores, making up reasons for not doing our homework. Maybe they think they should be showing us tough love to help us get over a childish desire to loaf.

We in the ME/CFS community know that this assumption of the presence of sloth and the absence of illness is a grotesque distortion of reality. Since the evolution of the internet and the ability to connect with each other online, those of us with computers and enough wits about us to use them, have finally been able to talk about it with each other.

It is comforting to me to find people like Llewellyn King who see the same reality we see. It stirs up some hope that if he can see it, maybe more people in our lives might one day come to grasp, and react to, the way things really are as well.