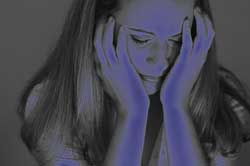 Why do people kill themselves?

Unfortunately, there is no simple answer to this question. People die by suicide for a number of reasons.However, the majority of the people who take their lives (estimated at 90%)were suffering with an underlying mental illness and substance abuse problem atthe time of their death. They weren’t sick, but their brains were. Too often we think that a person is their brain, that’s where their personality or character resides. This is not true.

The brain is an organ just like the liver, the kidneys, the gall bladder, etc. When it gets sick too often the appearance of the problem is in the form of a mental illness, as in the case ofdepression, bipolar disorder, anxiety disorders, or schizophrenia. If the brain is sick too long, it can lead a person to taking their lives. This isn’t always the case, as millions of people live with depression and never attempt or die by suicide, but with awareness, education, and treatment, people can be helped so that suicide does not become an option.

Do people attempt suicide to prove something or to get sympathy?

No. A suicide attempt is a cry for help that should never be ignored. It is a warning that something is terribly wrong. Chronic depression can lead to feelings of despair and hopelessness, and a suicide attempt is one way some people choose to express these feelings. Most people who attempt or commit suicide don’t really want to die – they just want their pain and suffering to end. A suicide attempt is also not done to gain someone’s sympathy, as those that attempt to take their life do it for internal reasons-they simply can’t stand the pain they feel emotionally and/orphysically. It isn’t to try and get someone to feel bad for them, that’s thelast thing they would want.

A suicide attempt must always be taken seriously. Without intervention and proper treatment, a person who has attempted suicide is at greater risk of another attempt and possible suicide.

What is depression and what are depressive illnesses?

Depression and depressive illnesses are classified as mood disorders in the medical field, including everything from Major Depression to Dysthymia. They have a number of symptoms that affect people socially, occupationally, educationally,interpersonally, etc. How does one become depressed? Basically, here’s how it works: the nerves in our brain don’t touch each other, but rather pass messages from one to the next through chemicals called neurotransmitters. We need just the right amount of this chemical between the nerves to pass the exact same message to the next nerve. If there isn’t enough of that chemical, the message doesn’t get passed along correctly and in this case, depression or a depressive illness can result. When it comes to depressive disorders the chemicals most frequently out of balance are serotonin and norepinephrine.


A person living with depression does not always have the same thoughts as a healthy person. This chemical imbalance can lead to the person not understanding the options available to help them relieve their suffering. Many people who suffer from depression report feeling as though they’ve lost the ability to imagine a happy future, or remember a happy past. Often they don’t realize they’re suffering from a treatable illness, and seeking help may not even enter their mind. Emotions and even physical pain can become unbearable. They don’t want to die, but it’s the only way they feel their pain will end. It is a truly irrational choice. Suffering from depression is involuntary, just like cancer or diabetes, but it is a treatable illness that can be managed.

How do alcohol and drugs affect depression?

Alcohol is a depressant, so it can and often does make depression worse. Drug use alone or in combination with alcohol use for someone suffering with depression can be lethal. Too often people attempt to alleviate the symptoms of depression by drinking or using drugs which can increase the risk of suicide by impairing judgment and increasing impulsivity.

Can a suicidal person mask their depression?

Sure, they can and sometimes do. Butwe can all be more aware of the signs and symptoms of depression to help thosewe care about get the necessary treatment to relieve them of their pain. Plus,because many people who are depressed can not see their symptoms, we have to be their eyes and ears for them to help SAVE their life. Many people sufferingfrom depression and even contemplating suicide hide their feelings and appearto be happy just prior to their suicide attempt. This often confuses the peoplearound them since for so long they had been suffering and appearing depressed,then all of a sudden seem better. However, most of the time a person who issuicidal will give clues as to how desperate they feel. It is critical that youfamiliarize yourself with the symptoms of depression andthe warning signs of suicide,and not be afraid to ask direct questions about feelings of the person you’reconcerned about-it could be what save’s their life!

Is a person at increased risk to attempt suicide if they’ve been exposed to it in their family or has had aclose friend who died by suicide?

Yes, suicide does tend to run infamilies, but this is generally attributed to the genetic component ofdepression and related depressive illnesses. A healthy person talking about asuicide or being aware of a suicide among family or friends does not put themat greater risk for attempting suicide. And mere exposure to suicide does notalone put someone at greater risk for suicide. However, when combined with anumber of other risk factors, it could increase someone’s likelihood of an attempt. Failing to treat or mistreating depressive illness puts a person atincreased risk of suicide. It is very important to remember that the vastmajority of people living with depression do not have suicidal thoughts or dieby suicide.

Why don’t people talk about mental illnesses like depression, bipolar disorder and suicide?

Stigma and lack of understanding arethe main reasons depression remains a topic we avoid. People suffering fromdepression fear others will think they’re crazy or weak, or somehow a lesserperson. Cultural norms are slowly changing, and people are becoming more awareof the nature of depressive illnesses and their impact on a person’s wellbeing. Education will help reduce stigma and save lives.

Alcoholism, drug addiction, HIV and AIDS are examples of medical conditions previously attributed to a weakness or character problems. Today, they are widely recognized as medical diseases and people feel comfortable openly discussing the impact of the disease and seekinghelp through a variety of treatments. The dangers of alcohol and substance abuse have been the subject of major national public health campaigns in the United States, leading to a general public more aware of the value ofprevention.

Talking does help treat depression.However, research continues to show that a combination of psychotherapy (talk therapy) and antidepressant medication is the most effective way to treatdepression. In some cases, well-supported psychotherapies, such as cognitivebehavioral therapy or interpersonal therapy can considerably alleviate the symptoms of depression. However, a medical doctor should supervise any course of treatment.

Why do people attempt suicide when they appear to feel better?

Sometimes a severely depressed person contemplating suicide doesn’t have enough energy to attempt it. As the disease lifts they may regain some energy but feelings of hopelessness remain,and the increased energy levels contribute to acting on suicidal feelings.Another theory proposes that a person may “give in” to the diseasebecause they can’t fight it anymore. This relieves some anxiety, which makesthem appear calmer in the period preceding a suicide attempt.


If a person’s mind is made up can they still be stopped?

Absolutely! Never give up onsomeone contemplating suicide. For a person determined to attempt suicide the desire to live is overshadowed by the seeming hopelessness of the disease. The decision to attempt suicide is really a desire to stop suffering. Never give upon someone just because they say they’ve made up their mind. Depression is acrisis and intervening to help the person regain perspective and aggressivelyfight the disease can help reverse the downward trend toward suicidal thoughtsor attempts.

Is depression the same as the blues?

No. Depression is a medical illness in the brain that can be clinically diagnosed and treated. While it’s normaland even expected to feel badly about losing someone you love or experiencing adisappointing or traumatic event, to consistently experience the symptoms of depression for longer than two weeks under normal circumstances may indicate the presence of adiagnosable illness.

Why do depressive illnessessometimes lead to suicidal thoughts?

As depression deepens and takes over the body and mind, the pain of depression often becomes overwhelming. Thechemical imbalance and deep despair can lead the brain to try and find ways toend the pain. This is when suicidal thinking begins. Depressive illnesses can distort thinking such that a person can’t think clearly or rationally. The illness can cause thoughts of hopelessness and helplessness, which may lead to suicidal thoughts. Education about the symptoms of depression andthe warning signs of suicidehelp people understand that depression and related depressive illnesses areboth preventable and treatable.

What causes a depressive illness?

Depressive illnesses are biological illnesses related to imbalance or disrupted brain chemistry. The brain is an organ of the body and can get sick just like the heart, liver, or kidneys.

A combination of genetic, psychological and environmental factors play a role in how and when a depressive illness manifests, and the same is true for suicide. Because these are illnesses,stress doesn’t necessarily have to be present, but can trigger or exacerbate adepression. Although rare, depression can appear out of nowhere when therewould be no reason for a person to feel depressed. More commonly depressioncomes on over a period of time with many factors going on at once in a person’s life.

People of all ages, including children, youth and adolescents, can suffer from depressive illnesses. Sincethey may be genetically pre-disposed to depression, a person may be at higherrisk than someone whose family doesn’t have a history of depression. This doesn’t however necessarily mean everyone will inherit a depressive illness.They just might have a predisposition or tendency toward it.

Can depressive illnesses be treated?

Yes. There are various ways to treat depressive illnesses depending on the type of illness, the severity, and the age of the person being treated. A person suffering with depression should nottry to manage the illness on their own. Knowing and recognizing the signs ofdepressive illness helps avoid needless suffering available through treatment. Depression is a condition like diabetes or high blood pressure that can beeffectively managed with the help of mental health professionals includingmedical doctors, registered nurses, psychologists and therapists, socialworkers, clergy, family members, and community support.