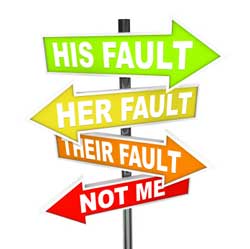 Thanks to Alex for allowing us to post a thought-provoking blog suggesting that focusing a bit less energy on righteous indignation and bit more energy on undertaking rigorous examinations of positions and studies might make ME/CFS advocacy a lot more effective.

We spend of lot of energy blaming people who do various things we don’t like. In particular, private complaints about proponents of biopsychosocial (BPS) approaches including CBT/GET are a favourite passtime – I understand why, but we make up most of the people listening.

This has some value, as it chips away at the image that these BPS claims are in any way acceptable or without controversy. However, it also holds us back.

Professor Malcolm Hooper has made some exceptional efforts at addressing this issue, and I extend that praise to many who support and assist him. It is not enough. Patients in general and the ME and CFS communities in particular have long been denied a say in issues on health. The irony is this appears to be in violation of the spirit of biopsychosocial approaches, though I am sure many will deny this. We are stakeholders in the medical outcomes, just as much as governments are, and we deserve representation and respect.


One of the problems we face is that we are making allegations based upon minimal evidence, and to some this can be presented as evidence of our irrationality, especially if they are unaware of the history of this disease and how we have been treated.

If someone does something we do not like, often we attribute some nefarious purpose to it, based on prior history of that person. This may or may not be correct about a specific instance, but its hard for others to see that without being aware of the history, and lets face it, most are unware of the history.

If person Z does action A, then we often claim some reason for this based on past experience. This is very hard to prove. To show pattern, we have to show this person has done A,B,C and so on.

A Way Forward
– There is a way forward. I am attempting, step by step, to esablish a roadmap for that.

Now while I cannot prove that a particular psychiatrist or researcher has done something completely unacceptable, despite some evidence that they have, some things are easier to establish than others.

There are many reasons why medical practitioners have a profound lack of knowledge on ME and CFS issues. One is they have almost no time to really keep up-to-date. It has been said that the closest a doctor is to being up to date is right out of medical school. Over time they fall further and further behind. This is reality, I do not wish to berate doctors for this, although I think that institutions could do more to improve the situation – and no that doesn’t include institutionalized evidence based medicine, though I intend to address that at another time. So if there is any blame on this specifically, it is most appropriately directed at the institutions and systems designed to keep doctors up to date. To claim that ME is not a real disease, has no physical problems, or has no abnormal pathology on tests, is not much different to AIDS denialism. This is an untenable and ignorant view in the current decade, and needs to be eradicated.

Doctors are also reliant on established information sources. This includes medical journals, and in the UK it includes NICE (National Institute for health and Clinical Excellence). If there is entrenched bias on the science from such sources, the doctors who rely on them could be severely misinformed.

They are also guided by their professional bodies. In the UK that is the General Medical Council.

There are many academic institutions involved also. In the UK one of these is King’s College in London.

Professor Malcolm Hooper has done some things to address this issue. I think the ME and CFS advocate community could do more. I think it is time for us to do more.

Lately I have seen a trend on Phoenix Rising and other advocacy sites that I highly approve of. We are becoming more sophisticated in our approach to these issues. In particular we have very long technical threads discussing the science from many points of view, and recently a thread was started to go back and review older evidence for things we might have missed.


An ME/CFS Advocacy Rosetta Stone – I have called the paper from the PACE trial a Rosetta Stone. The glaring errors (especially in the design and execution of the study) and easily misunderstood representations in the paper and press statements are a pointer to what we need to look at. Quite a number of people have worked on this, and in particular I would like to thank Tom Kindlon for his work on re-assessing harms in the PACE trial.

Suggestive evidence is not enough unless a pattern can be established. Clear breaches in logic and unfair representation of issues can be challenged on scientific grounds. This has been done, though more is yet to be released, and I do think we could make more of unfair representation in media communications based upon the facts and anything that can be directly inferred from the facts.

Medical ethics require fair treatment of patients, but also fair treatment of prospective patients who receive treatment based upon research which is highly reliable, and a requirement to not bring the profession into disrepute. These are their Achilles’ heels.

Scientists rely upon their scientific reputations. So do their institutions. A prolonged pattern of apparently misleading statements and science can undermine the reputation of an institution. They are responsible for their own member’s conduct, particularly if they fail to identify and correct issues over years and decades.

Now various researchers in the BPS approach have conducted research that many of us regard as highly questionable. There are however accepted standards in science that give them some protection, and justifiably so. Any individual breach could simply be a mistake. A pattern of breaches in standards is a cause for concern. But for who? Who is responsible? Who is the watchdog who is supposed to say, “enough, these matters need to be addressed”?

Who are responsible? Their respective institutions and oversight bodies are responsible. If an institution misses a breach of standards, that could be called an oversight or error, or even allowing the individual the benefit of doubt. If, however, they fail to address many similar breaches from many people, on many occasions, year in and year out over decades – that is a different problem. It is strongly indicative of a systemic failure of the oversight body. They should also be called to account.

Such statements should be directed at every regulating and standards body involved, from research colleges to medical boards, from government departments to the World Health Organization. If necessary the same statement should be sent to multiple organizations.

If or when these relevant bodies dismiss these statements as not worthy of investigation, then that particular body should be made to explain. If they fail to explain, adequately and in a timely fashion, this fact should be disseminated widely to other bodies, organizations and media. If the organizations responsible for adhering to standards cannot function adequately, we should be calling for their overhaul or for them to be completely scrapped. Those complaints should go to the next raft of supervising organizations. These complaints are also valid if the oversight body claims it has no responsibility on these issues – that is just passing the buck, and implies they have no relevance at all.

Now I haven’t said much about the media in the UK in this blog. I have not seen much evidence of fair, balanced reporting in a widespread fashion in the UK, but this is hard to prove from isolated instances. This is a fundamental failure of journalism, and it is not limited to the UK just most obvious in the UK. I think that might require another blog some time in the future. It is a similar story for the peer review process in journals – it certainly needs to be investigated.

So expect me to be hard on individual claims of misconduct or misrepresentation that are made about many involved in BPS for ME and CFS. I don’t want vague claims. I want the kind of evidence that will bring down institutions, end careers, and discredit BPS so badly that it will force a complete re-evaluation of the science, perhaps a complete paradigm shift.

In other words, I want rational research, fair treatment for patients in medical matters and beyond, and a better standard of medical and social care.