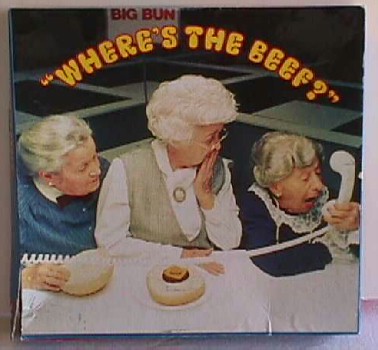 ‘Where’s the Beef’ became a key catch phrase of the 1984 Presidential campaign but one wonders if the WPI is asking themselves the same thing today. They produced a major finding that got the feds to throw a substantial amount of money at XMRV none of which, thus far, has made to the WPI. The WPI might have expected to share in the resources being doled out to XMRV but they haven’t. They may very well be asking “Where’s the friggin’ beef?”

There is a view that the WPI is out of the mainstream…and indeed it would be hard for a brand-new Research Institute focused on a controversial disease to fit into the mainstream of the research community. With the help of two decidedly mainstream groups, the National Cancer Institute and the Cleveland Clinic, however, the WPI, made one of the hottest medical research discoveries of the year. It’s XMRV paper appeared in the pages of a prestigious journal – Science – which is devoted to publishing paradigm shaking studies. Indeed the XMRV finding unleashed a storm of interest in the research community and singlehandedly pushed what was a little studied virus into the mainstream. There’s little evidence, though, that that discovery did the same thing for the WPI.

There appears to be a disconnect between the response of the research community and the response of the research bureaucracy. The research community jumped on the findings, plucking out money from bits and corners to fund a variety of studies. The National Cancer Institute (NCI) – which has no mandate to study CFS – has reportedly spent over a million dollars of discretionary funds to develop reagents and tests. Fearing that a pathogen has been unleashed in the blood supply the DHHS put together a working group composed of various federal agencies to get to the heart of the matter. The CDC reportedly began working on CFS blood samples immediately. Patient support groups in the UK and the US (Invest in ME, CFIDS Association) cobbled together studies of their own and many small research groups launched their own studies.

But the biggest player in the retroviral field, the National Institute of Allergy and Infectious Disorders (NIAID), has been almost silent. The NIAID’s budget is about 4 ½ billion dollars little of which is being spent on XMRV. The agency finally coughed up two grants this month on basic XMRV science; neither one was much to crow about for ME/CFS; one was on cancer production by gammaretroviruses in wild mice (not specifically on XMRV) and one is on XMRV integration sites. Only one grant has specifically been approved for XMRV and CFS and it’s a good one; it will study XMRV in Dr. Bell’s cohort and the Nevada cohort but oddly enough it’s not by WPI researchers. In fact, none of the researchers associated with the Science paper have received any grants for XMRV…

The troubling thing is that it’s hard to imagine that they haven’t tried. Grants take their time to get written and approved, but the researchers involved in the Science paper surely had their own grant proposals underway at the time of the Science papers publication. No one from the Science team, however, neither Dr. Mikovits, the Ruscetti’s, Dr. Lombardi or Dr. Silverman has been rewarded with a single grant on XMRV since their study hit the presses.


The problem is that discretionary funds and private donations only go so far. I don’t know how Research Institutes are run but I do know that federal funds are a major source of medical funding in the US, and it would seem challenging, at best, to run a Research Institute without them. (The WPI is, of course, receiving payments for its diagnostic tests). Yet, ten months later the WPI’s grant requests have been reportedly repeatedly turned down making it possible, oddly enough, that the Whittemore Peterson Institute was in better financial shape before they made the big medical discovery than they are now. The Institute that pushed XMRV out of the fringes into the mainstream is still on the fringes itself.

Dr. Peterson made it very clear at the CFSAC meeting that the WPI was never big enough to go it alone in the XMRV effort – that it’s goal was to spark interest in the research community. The plan was surely not, however, to cede the research effort on XMRV to the research community. Yes, the work on XMRV goes on at the WPI but surely WPI researchers expected to be benefitting from federal funds at this point. (The situation brings to mind Dr. DeFreitas frustration at learning of another researcher getting funded to study her virus while her grant request was denied).

It’s too early to tell if a pattern is emerging but it is perhaps time to wonder about the future of the WPI and XMRV. The WPI lead the way on XMRV and CFS but will they in future? Can they if they don’t get ample funding? If they can’t get XMRV grants – what kind of a future awaits the CFS community? Hopefully a new group of researchers would bring new eyes to XMRV and CFS, but given CFS’s torrid history with the mainstream research community, surely everyone would breathe easier knowing that a strong, independent, committed research institute like the WPI was at the forefront of the ME/CFS-XMRV effort.

Much, of course, remains to be determined about the fate of XMRV. If XMRV’s association with ME/CFS is validated the research floodgates should open making it starkly apparent whom the federal granting system has chosen to reward and whom it has not.