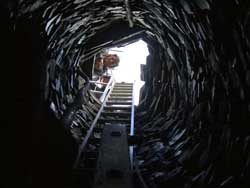 As the CFSAC meeting and our continual quest for real funding gets underway it’s important to understand what kind of disorder the NIH believes CFS is. One way to do that is to look at other disorders they’ve decided are also worthy of little funding. Remember being put in math class as you entered Junior High based on your testing scores; you could either be in the accelerated class, the average class or the behind class. Let’s take a look at our partners in the ‘behind class’.

There are about 30 disorders that are more or less the clear bottom feeders at the NIH – stuck at less than 15 million dollars a year in funding. If you took at a look at them some patterns do begin to appear; diseases that get poor funding at the NIH are usually either rare, minor or strike women.

Facts on CFS to keep in mind
Affects from 1-4 million people in the US (@1/100-300 people), causes high rates of disability and costs the US economy around 20 billion dollars a year in economic losses
Total NIH Funding/year – $5 million

The Absolute Bottom of the Barrel at the NIH – (<5 million dollars a year) – CFS enjoys the company of a weird mishmash of rare, ‘old’, minor or other disorders and conditions. They include such things as allergic rhinitis (hay fever), DES (4 million), Facioscapulohumeral Muscular Dystrophy, hepatitis A (hepatitis C gets 100 million), Paget’s Disease, pelvic inflammatory disease, Pick’s disease and vulvodynia (clocking in at $1 million) – all of which get under 5 million dollars a year. Let’s take a quick look at ME/CFS’s allies in poverty.

Mostly Rare Disorders – DES is a drug that caused awful damage to fetuses forty years ago and has not been used since. Studies are now focusing on third generation effects on the drug. Facioscapulohumeral Muscular Dystrophy is a rare form (effects7/100,000 people or about 20,000 people) of muscular dystrophy ($70 million/year). Hepatitis A is a serious disorder that is, nevertheless, almost completely contacted by US citizens when they travel outside the country and is rare inside it. Pick’s disease is a very rare neurodegenerative disorder. Paget’s disease is a bone disorder that sounds like it should get more money. Hay fever, of course, is just hay fever.

Women’s Disorders – Pelvic inflammatory Disorder and Vulvodynia are in much the same boat as CFS; both are women’s disorders that are fairly common, cause high rates of distress and are virtually ignored by the NIH. PID causes 100,000 women to become infertile every year. Vulvodynia is characterized by chronic pain in the vulvia that has defied explanation causing many women to be told the pain ‘is all in their head’. It, like CFS, may be associated with Herpes infections. All are hard to characterize.

The Next Step Up – Next up in the great losers of the NIH series ($5-15 million/year funding) are more of the same – mostly rare disorders or, if they’re not rare, then they are, yes, female disorders.


Mostly Rare Disorders – Batten Disease is a rare neurodegenerative disorder that effects 2-4 people/100,000 and gets $6 million/year. Rett’s Syndrome is a rare autism-like disorder (4 per 100,000 people) who’s budget, nevertheless has doubled over the past five years to $10 million/year. Mucopolysaccharidoses (MPS) (7 million/year) is a group of 5 very, very rare metabolic disorders (none affecting more than 1/100,000 people, one of which affects 1 person!) that has somehow managed to attract 40% more funding every year than CFS – which effects at least a million people. The budget for ataxia telangiectasia which affects all of 3 people per million (200 in the entire US) managed to increase by fifty percent over the past five years and now receives almost three times as much money (13 million dollars) as CFS. That’s $60,000 a year spent on every AT patient vs about $5 a year on everyone with CFS.

Female Disorders – This rung of the ladder is loaded female disorders -Some are relatively rare; anorexia nervosa (8 million/year), for instance is a well known but relatively rare disorder (10/100,00) effecting mostly women. Myasthenia gravis is a rare autoimmune disorder clocks at 7 million a year and mostly affects women between 20 and 40 years of age.

But then there are the common female disorders and here the story can only be described as tragic. Interstitial cytisus is a mostly female urinary disorder whose budget has dropped by over half in the past five years (to 12 million/year)..yet could effect up to ten percent of women. Endometriosis, is a painful gynecological condition affecting from 5 to 10% of American women, which receives all of $16 million dollars a year, or about $1 per year per woman. (Your pain is much appreciated!).

Shockingly, funding for the second the most common autoimmune rheumatic disorder in the US, Sjogren’s syndrome, which is almost completely dominated by women, is not even listed. Of course, there are the fibromyalgia patients – all 10-15 million of them, gleaning from the federal government a grand total of 12 million dollars a year at the rate, again, of about $1 per patient a year). Add in female dominated chronic fatigue syndrome (1-4 million/ $5 million a year) and you have an ugly, ugly pattern.

Hence the CAA’s Campaign to End Pain in Women working with Interstitial Cytitus, Endometriosis, TMD and Vulvodynia groups to increase research funding for some 50 million women the NIH is largely ignoring.

Conclusion– It appears that women’s rights still have a ways to go in the medical arena; the low priority conditions for the NIH tend to be either very rare conditions or common difficult to understand conditions that strike mostly women. The good news for these under-served mostly women’s disorders is that they are common; if support groups can bring those numbers to bear on the political process they should, like other women’s conditions in the past, increase their funding.

What to do? The only thing to do, beside pray for rain -which hasn’t worked so far- is to take action. Now, with federal officials meeting in Washington, is a great time to do that.