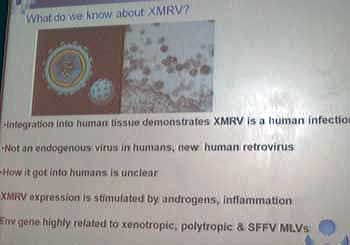 Thanks again to Lannie for allowing us to post her very thorough report on Dr. Mikovits lecture. Check out her blog and the original post here.

And now back to the story of XMRV. What do we know about XMRV?

What we know about XMRV is that it integrates into human tissue, demonstrating that it is a human infection. We can confirm it is NOT an endogenous virus to humans. It is in fact a new human retrovirus. However, how it got into humans is still unclear at this time. We know that XMRV expression is stimulated by androgens (hormones), cortisol and inflammation. And we know that it is an envelope gene that is highly related to xenotropic, polytropic and SSFV MLVs. This relation, or similarity, that the XMRV envelope has is important. 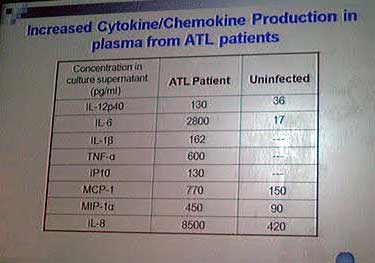 We know in the animal world that Xenotropic, polytroips and SSFV MLVs cause neuroimmune disease and lead to tumors. There is information available to us in these animal models that allow for us to make very short leaps to humans. It is common place in science to utilize these similarities in animal models. These do not usually point hysterically to animal contamination, but are considered a starting point or, as both Whittemore and Mikovits called it, “a bridge” for researchers.

We also know a bit more related to biomarkers common to those with XMRV.

’m afraid I can’t remember what ATL stands for, but basically it’s representing a category (ONE REPORTED BACK THINKING IT IS HTLV, ANOTHER HAS SAID ADULT T CELL LEUKEMIA/LYMPHOMA – THIS IS NOT CONFIRMED, PLEASE WAIT FOR VIDEO – 1/20/11) and comparing them to uninfected. You’ll notice extreme increase in Cytokine and Chemokine Production. 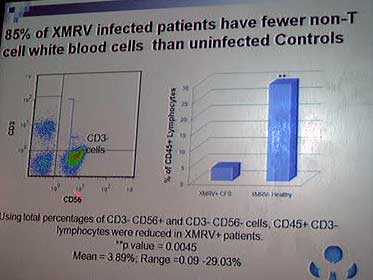 There are further immune cell abnormalities for those with XMRV.

As we’ve heard before, XMRV infected patients have reduced Natural Killer cells. What does this actually mean? The CD56, the cell that manages the killing off of bad things is significantly reduced. Therefore we can’t fight off infection as well as a healthy counterpart. The CD19, which creates B cells is severely reduced.


The CD19 is related to our production of immature CD20, which has a direct correlation with tumors. Mikovits did note some reported success published in regards to Rituxan, a chimeric monoclonal antibody against th 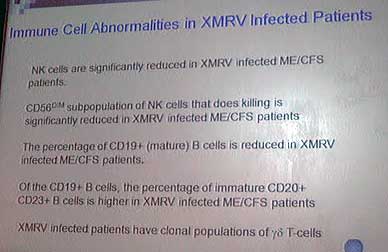 e protein CD20, which is primarily found on the surface of B cells. Rituximab is used in the treatment of many lymphomas, leukemias and transplant rejection. It has also been used off label for numerous autoimmune disorders such as Rheumatoid Arthritis, Multiple Sclerosis and Lupus to name just a few. The last note is very important, XMRV infected patients have clonal populations of gd T-cells. This is important, as look at the next slide…

Clonal T-cells – This slide depicts 20 CFS patients, all XMRV+(less 3 not tested), all Clonal TCRg positive (less 5 not tested), and these are all of the types of Lymphoma/cancer they have (the 3 suspicious means they’re showing signs of early stage).

Until the team of Lombardi, Mikovits, et al, no one had a tool to detect XMRV. This is an image of how they perform the lab work to find XMRV results. 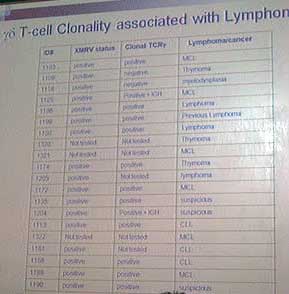 Assays – The top half shows the original process performed for the Science, 2009 published research. Mikovits spoke of step 1 was Plasma. Step 2 was Serology. Step 3 was to culture with the XMRV prostate cancer cell lines and then let grow for 21-42 days, varying awaiting activation. Then Step 4, a western blot of the cultured sample. She noted that the lab can only handle 10 samples through each stage at a time, as this process is so labor intensive, hence the delay in results.

The bottom half with images under “Current” is the process they’re using and planning to have available at VIP Dx by June 2011. This is a new assay that cultures in 4-18 days. You can see it is active, or ready when it turns green (see white squares with blue and green dots).

In discussing tests, another very important take away was that if you test positive you are positive. If you test negative, they are not able to confirm it is absolutely negative. Until there is further understanding of the XMRV lifecycle, they can not confirm this. One last note, she mentioned that serology AND 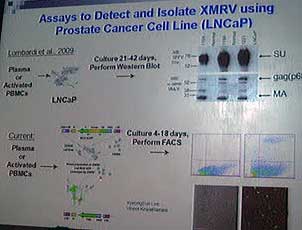 culture were so very important to have run. As a patient, I remember filling out the form for VIP Dx. It is cheaper to only run serology, but that is not recommended. Mikovits noted “especially the sickest, get negative antibody response, but positive culture.” I’ll cover treatment later, but she also noted that once some of these especially sick patients went on antiretrovirals they were able to create an antibody response. Prior to, their systems were just too weak. Creating an antibody response would cause the patient to then also report positive on serology.

You “never see these in healthy people!” exclaimed Mikovits. She stressed how the positives and negatives are SO CLEAR. You can see in this slide above, sample 1197 is clearly negative. Yet the rest are so clearly positive. She showed an interesting example here. I unfortunately wasn’t quick enough with my camera to nab the initial slide. We first saw an initial antibody test where sample 1118 was negative. Then this slide was shown, after more extensive culture testing, 1118 is clearly positive. This is where she stressed that 1118, like many, many not specifically have XMRV, but most definitely has an MRV. Going back to my comment from Part 1, of the Phylogenic Tree. There are multiple sequences these patients can fall under. Some can even be positive for more than one. 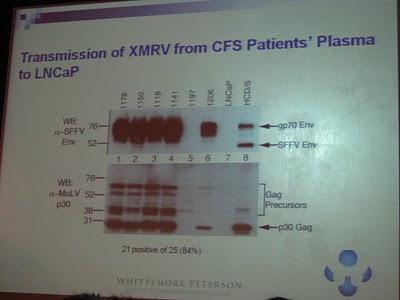 Disease Associations – So where are we seeing XMRV? The disease association seems limitless. It’s showing up in every corner of the neuroimmune world.

One private practice shared it’s associations with Mikovits and the WPI team. This practice started testing its neuroimmune patients and soon found they were treating XMRV positive patients with CFS, Fibromyalgia, Chronic Lyme Disease, Multiple Sclerosis, Parkinson’s Disease, ALS, the list goes on. I think it is safe to say this is a private practice for adults, therefore we’re not seeing the children with autism in this example as we did with the family profiles from Part 1 discussion. Finally, it was noted that XMRV research has concentrated around ME/CFS to date, but larger studies on the presence of XMRV in these other neuroimmune diseases are coming. 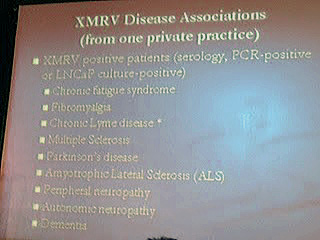 Lyme Disease – As a Chronic Lyme Disease patient, I found it very interesting that much of this conversation seemed to go back to Lyme again and again. During the presentation and the Q&A session. In the presentation they referenced a study where 65 Chronic Lyme Disease patients were tested for XMRV, and 100% came back positive. This was the most reactive group the WPI has seen. That is a higher rate than ME/CFS! I thought Annette Whittemore said it best, “Every time we hear something new about XMRV, we find a similar finding within Lyme. It’s amazing!”


Treatment Options: ARV’s – So now what we’ve all been waiting for. Treatments options!!

This first slide was a reminder of the study performed by Singh, et al in vitro. Three antiretrovirals showed promise amongst 45 compounds and 28 drugs approved for use in humans. Those three include Zidovudine(most know it as AZT), Tenofovir and Raltegravir. The study showed all two-drug-combinations showed efficacy against XMRV in vitro. 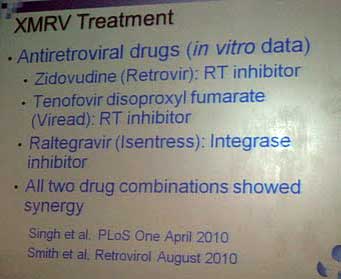 Given those results, Dr. Brewer, an infectious disease specialist who’s spent much of his career in HIV but more recently in ME/CFS and XMRV, has used 2 and 3 drug combination antiretroviral treatments with a CFS/XMRV+ patient sample of 25. The results have been a mixed bag among the patients on ARVs anywhere from 1-9 months. The expected Herxheimer response occurred in some as would be expected.

Symptom reduction has been reported, however majority reported feeling “about the same.” Dr. Mikovits referenced Dr. Deckoff-Jones, along with Brewer’s patients and a few others. She has noticed a common theme of patients feeling better around 6 months, followed by a return of all or most symptoms. It sounds very similar to what happens to many on antivirals. I appreciated that she didn’t 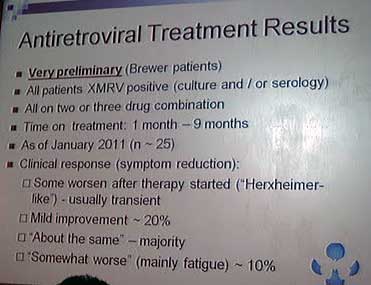 stop here however. She went on to ask herself and her team “how can we add immune modulating supplements to keep up the response beyond 6 months?” That might be the next step we see in antiretroviral (ARV) discussion.

Glutathione – Next, Mikovits covered her “other thoughts” beyond Singh’s and Brewer’s experiences/findings with ARVs. She recognized ARVs might be part of the picture, but they do not address the entirety. XMRV patients are still dealing with metabolic abnormalities including oxidative stress, glutathione depletion and DNA hypomethylation. The concern is that all three of these are not only abnormalities in XMRV patients, but they all increase viral replication. 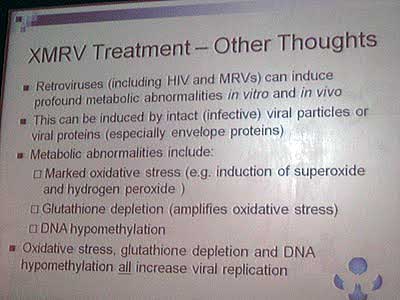 She first discussed how the restoration of glutathione would reduce stress on XMRV patients remarkably. Next, she covered the need to restore and or improve methylation. She suggested methofolate and B12, and specifically mentioned supplements called Deplin and Cerefolin NAC. THIS OF COURSE SHOULD BE DISCUSSED WITH A MEDICAL PROFESSIONAL BEFORE TAKING

Immune Modulation – When discussing Immune Modulation, Mikovits introduced a few points that were new to me. She sees great promise in the newer treatment options popping up such as GcMAF, Stem Cell Therapy and Peptide T. However she is concerned that they may “activate the inactive reservoir XMRV.” Meaning there could be some XMRV in our bodies that is still dormant, but activation of our immune system might bring them out. However, she didn’t stop there. She mentioned that this might actually be a good thing. As ARVs are more effective in HIV since HIV replicates considerably more than XMRV, maybe one of these will get XMRV replicating so the ARV has a job to do. Another area that will surely be discussed further. 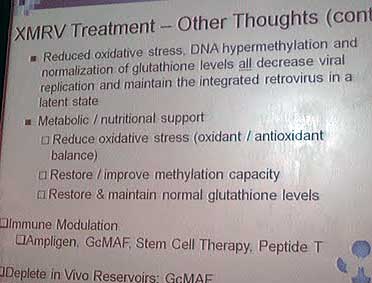 Ampligen – She addressed Ampligen separately. This drug has been around and documented more than the previous three discussed. Her comment on Ampligen was that it activates the viruses in about 1/3 of the cases. So there again, it could be a matter of hitting those with ARVs. However, a little scary for those in the Ampligen trials and are unable to take antivirals or antiretrovirals while on Ampligen.

Net, net, more research needs to be done before she can make recommendations on treatment as a researcher.

WPI Future Research – Finally, what does the future look like for XMRV, and for its patients?

The slide is pretty straight forward. It was not hovered over for all that long. What I took away from her discussion was that the question of being able it isolate a polytropic was most interesting to Mikovits. Note this was only my opinion. 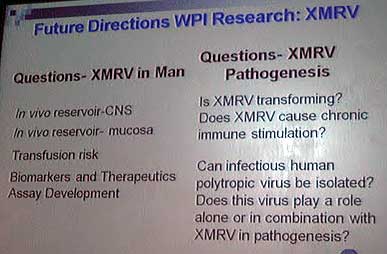 The subject I’ve stayed away from, that was discussed intermittently, was the politics of it all. Our government’s involvement, or lack thereof. I’d like to close with a quote from Mikovits, when asked about the politics and all the second guessing that has occurred regarding her research today. Very confidently, and quickly she retorted, “I think the politics will go away shortly.” Period. All she said. There was a gasp in the room, and she moved on as if she had just said “please pass me a glass of water.”

This leads me to believe there is a research paper on its way to being published that will close the case on the contamination theories, the replication theories, and hopefully the cause/effect query. Just my take, but she seemed pretty darn comfortable making that statement… “I think the politics will go away shortly.” All I can say to that is, let’s sure hope so!

**Please note, Lannie is not a scientist, doctor or treating physician. She is a patient that has taken an interest in her own health and whild doing so is attempting to share her learnings for the larger patient community. These are only her opinions and take-aways. If you feel a piece of science has been incorrectly reported, feel free to contact Lannie with a suggested change – via the comments section or at lannieinthelymelight@gmail.com – Thanks!
Share this!