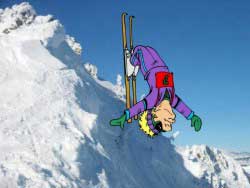 I did it! The year on Ampligen is over, and I’m about to burst at the seams. Would you join me now in celebrating my victory?

If you watched the NFL playoffs this past weekend you saw the New York Jets doing on the field what I have felt like doing all week – literally doing backflips for joy. I mean, these players were so happy, they were getting airborne like circus acrobats! Why? Because they defeated a so called “invincible” enemy – the N.E. Patriots. (To see a clip of the Jets flying and flipping go here. ) Those players weren’t saying “look at me.” They were saying with their somersaults and handsprings, to all the other NFL teams who had gotten punched in the mouth by the Patriots, “Look! Those guys are not invincible. It was a war, but they CAN be beaten!”

And make no mistake, the Ampligen protocol is very much a war.

As those of you who have been following my blog and adventure the past year know, for the entirety of 2010 I basically put my and my family’s life on hold in order to move to a US city to receive 12 months of the “trial-drug” Ampligen. There is a good reason this medicine is defined as a “trial” – because it was one of the hardest things I’ve ever been through.

By suffering from M.E. you understand what a “trial” is. Ampligen makes our normal trial even worse for the first six months. In addition to being pricked twice a week and feeling like you have a horrible flu for about 6 months, from the drug and virus reaction to the drug infusions I’ve experienced sciatic nerve tremors, diarrhea, constipation, temporary vision loss, muscle aches, depression, loss of libido, loss of energy (what little I had), and a lot more.


During this trial I found out I knew curse words in languages I don’t speak, and my wife learned when to stay away from me on bad days simply by watching my eyes dilate. If you really want the good bad and ugly details start with “My Treatment Begins” here on The New Ampligen Diaries and read through the year’s “trials.”

But despite all those physical side effects, and the concomitant emotional side effects, today as the battle draws to a close I have to say yes, it was worth it! Ampligen delivered as advertised! Although I don’t have all the tests results from the clinic, by family’s and co-worker’s measurements, along with my own personal report-card, I am probably 70% better! We have a saying at the clinic- “Ampligen doesn’t cure you or fix everything, but it gets you close.” To see the before and after report card scroll down to the bottom of this earlier post.

But in short, after arriving here one year ago so sick I was barely able to walk, after one full year of Ampligen, today I am able to…

* do my job about 6 hours a day (from my laptop, on the phone and Webex with my staff around the country),

* go to the gym and do a 45 minutes a day in resistance exercise,

* go to church every Sunday, and stand a long time,

* even be funny occasionally.

I no longer have canker sores in my mouth, no more swollen glands, no more brain fog, and I even went to an NBA game last Thursday night and stayed for 2 quarters! My orthostatic intolerance has almost disappeared completely.

Yes, I still get tired by late afternoon, and but if I remember to get horizontal often during the day, even just for 10 minute bursts, I get new wind. Yes, my leg muscles do sometimes get sore, but nothing like they used to, and no more restless legs at night!

All in all, the reward I am experiencing now was worth the risk.

In that regard, by writing this post, I know I am risking hurting some of my fellow sufferers feelings, just by reporting the good news. I remember how bummed out I got a couple years ago when I read the testimony of a man who was completely healed of M.E. through an advanced anti-viral regimen in Europe – drugs that I had no ability or resource to get at the time. It made me feel all the more sick that day; and down.

Please understand my motivation here. I am neither trying to make you feel worse, nor lobbying that you follow my path and try to get this drug. I promised my followers and readers to tell the whole story, from beginning to end, in complete candor. To be honest, when I started I expected to be an apologist AGAINST Ampligen. I was fully prepared to blow the lid off of a scam. Or even die. But in my case, it wasn’t…and I didn’t!

* Hope that these hideous bugs and pompous pain provokers can be stopped;

* Hope that maybe very soon, there will be drugs affordable and more readily available* to all that really work;


* Hope that these viruses, this enemy of ours, is not invincible.

Now I embark on a new journey. A journey where I learn how to live again. In order to “seal” my healing, I’m staying in the USA a awhile more. I’m moving to a Western town near the Rockies not only for the clean air and non-toxic environment, but because of its proximity to things I used to love to do. Many of you know before I got sick I was pretty adventurous. I flew aerobatic planes, was a flight instructor, won some awards soaring in gliders, and loved to ski and parasail.

I’m not sure I’ll actually be able to do all these sports again, but I’m going to give em a shot. Because all of these sports have one thing in common- done correctly, you don’t need the energy of a teenager or the strength of NY Jet to get airborne. You just have to know how to use gravity to your advantage.


So I’ll be spending the next year or so learning how to fly again, with my new body. I promise I’ll keep you posted on my progress, and as always, the times I mess up as well as the times of victory.

As both a victory celebration, and a vision for what I hope to be able to do again this coming year, I’ve put together a 4 minute You Tube music video entitled Learning to Fly Again. It motivates me every time I see it and hear the Foo Fighters music. I hope it does you too.

Kelvin Lord
Enroute to the Rockies