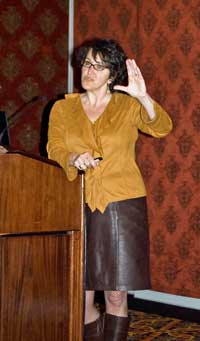 As expected Dr. Vernon delivered a rather comprehensive overview of the latest XMRV study in the Retrovirology journal. Dr. Vernon spent some time making clear who just who did this study; it was basically the best of UK retroviral researchers (one ‘world-renowned’) plus top ME/CFS UK researchers with long histories of CFS research.

Like Dr. Shephard she clearly felt this paper presented a significant hurdle for XMRV. She reported that the PCR methods were identical to those used in the original paper. When those techniques didn’t find any virus they looked harder using a different, much more sensitive PCR technique. Dr. Vernon stated it could be ‘considered better and more sensitive’ than used in the original Science paper and they stil came up nothing.

Again: the Wrong Patients? – The sample came from three cohorts. Dr. Vernon noted that because the blood from the biggest cohort came from relatively ‘new patients’ (1-4 years) it’s possible that XMRV doesn’t show up until later in the illness. This is not unheard of. My understanding is that HIV first attacks cells in the gastrointestinal system and that it can take several years before high levels of the virus occur in blood cells. The low copy level of XMRV suggests that it could have another locus in the body as well. Dr. Vernon discounted this idea to some extent by noting that Dr. Kerr, a prominent ME/CFS researcher (who derives his funding from several ME/CFS support groups), helped conceive the study and presumably would have taken care to include more ‘WPI-like’ patients in the other cohorts. Still it’s a possibility.

Did a longer duration, sicker, perhaps more immune suppressed group have a more detectable infection? Not according to Dr. Mikovits; she recently reported that patients in the study simply needed to meet the Fukuda or Canadian Criteria for inclusion; they were not particularly ill or disabled.


Still, Dr. Vernon took the WPI researchers to task for not releasing information regarding the illness duration, illness severity and treatment history of that original cohort, going so far as to suggest that their inability or unwillingness to do so could imperil the further research into the XMRV/CFS connection. She is clearly worried that more results like this one – which she warned will be forthcoming unless researchers know which patients to study – will dampen scientific interest in XMRV and CFS.

Hiding out in the UK but not the US? – She also noted that the virus could be present in such low levels that even with their more sensitive techniques the Retrovirology researchers couldn’t find it. That begs the question, though, why the WPI with their less sensitive methods was able to find it both before and after the Science paper in both US and UK patients. (Dr. Mikovits noted that VIP Dx labs sometimes searched 3 or 4 times before they found the virus – did the WPI researchers do the same with their Science samples?)

The virus is clearly hard to find, that’s for sure; of the 27 people on the Phoenix Rising Forums VIPDx Poll only about 20% tested positive to the PCR test but 20% is still light years different from the zero percent the Retrovirology researchers reported; given their background they clearly would have loved to find 20% positive rates.

Yes, perhaps there weren’t enough long duration and severely ill patients in the Retrovirology study and the Imperial College study but it still seems hard to believe that the wrong patient cohort is the cause of “zero percent” positive rates. The cause of the conflicting study results is still very unclear.

Dr. Vernon made it clear that the DHHS studies will use different techniques, including the WPI’s original techniques, to examine people who tested positive for XMRV via the VIP Dx lab test. This will help determine why the discrepancies are showing up.

Everyone’s Doing Everything Right! – This has been a tough couple of days for XMRV but check out this take from a researcher in ScienceNow. It suggests that disparate results happen even in the best labs.

Quote:
“discrepancies between labs are common, says David Griffiths, a virologist at Moredun Research Institute in Midlothian, United Kingdom, who has studied previous claims for retroviruses as the cause of chronic diseases. He also notes that he cannot find serious flaws with any of the published studies: “All the people involved are doing things exactly as they should be.” For the time being, then, the XMRV results will remain frustratingly ambiguous. As Griffiths says, “There must be an explanation for why disparate results are showing up, but it may not be an easy thing to turn up.”

For the Full Text of Dr Vernon’s Analysis