Is there any more terrifying place for CFS patient to be than the emergency room the hospital? Sure, emergency rooms are upsetting for everybody but to be in emergency room knowing that the ER personnel’s biases towards you could leave you with substandard care, at the very time you need good care, is frightening . In an emergency room you want to be able to have trust but trust is a hard thing to come by when chronic fatigue syndrome patients step into almost any medical facility. No wonder that Dr. Bell strongly urges chronic fatigue syndrome patients NOT to tell ER personnel that they have CFS.

Mike Dessin’s emergency room visit at the end of 2008 is a case in point. Mike made it out of the emergency room barely intact but his visit demonstrated the callousness the medical profession can strum up when it doesn’t know or understand (or want to understand) the patient it’s dealing with.

Under the care of his practitioner Mike had improved somewhat but was still emaciated and horribly weak. Ordinary stimuli such as light and noise left his fragile nervous system horribly shaken. When, after lying on his back for the past year, sitting up too fast caused both lungs to partially collapse, he was rushed by ambulance to the emergency room. The report demonstrates in clinical fashion just how ill he was.

The intake notes state that ‘pt. whispers and asks staff to whisper questions d/t sensitivity ‘ and appears ‘under nourished and dehydrated’. (Mike had severe stomach pains when eating and became so sensitive to foods that he had lost about a third of his normal weight). At 6’3” he now weighed 114 lbs. They indicate that wracked with chest pain and hypersensitive to almost all stimuli Mike came in the emergency room wearing dark glasses and with his earplugs in. Even with the dark glasses on he asked that the lights be turned off.

The first physician casts Mike in a uncooperative light that sets the stage for his stay there. Despite evidence (need to whisper, problems with light) that Mike is severely debilitated the doctor believes Mike’s ‘frustration’ is the reason he’s having trouble communicating. Mike’s explanation about his problems (he has chronic fatigue syndrome/ME) doesn’t mesh with the doctors understanding and he states that Mike ‘offers no helpful information to me’.


Further examination reveals that Mike has pancreatitis and two partially collapsed lungs. Mike requests that he’ll be fed intravenously in order to get his weight up and the hospital does this one night but after that the insurance company states they will not pay for any more procedures. With that Mike, at 114 lbs, with his dark glasses on and earplugs in, barely able to whisper, unable to stand upright or even sit upright for extended periods because of his chest pain , (not to mention his POTS), and with his partially collapsed lungs and pancreatitis, is unceremoniously booted from the hospital.

To go where one wonders? Did they even think about where Mike Dessin would go? A lonely apartment room to die in? Did they even consider what options he had left? Did they wonder amongst themselves how much longer he would live? Or was he just one of many they’d seen fall through the cracks? Just another medical statistic?

Clearly Mike was an unusual patient – a difficult patient for our medical system to deal with. Physicians are left dumbfounded at these patients inability to tolerate stimuli and their extreme debilitation. Not knowing how to deal with them they often simply throw them into the medical professions favorite wastebasket (mental illness), which many believe CFS is, and wash their hands of them. 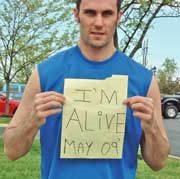 Patients honest enough to tell emergency room personnel they have chronic fatigue syndrome are often rewarded with a cursory examination. The term seems to put blinders on them causing them to lose their diagnostic zeal – tests are not performed, examinations are done sloppily, seemingly standard courses of treatment are ignored – emaciated, diseased individuals are booted out into the streets.

Mike was lucky; he had a physician who stood by him night after night but it was still touch and go. He almost did die -losing another 10 pounds – and his doctor feared for his life but eventually he did turn him around….he was not another medical statistic, after all.

Mike and his Doctor, a former emergency room physician, hope to educate emergency room personnel and other doctors about the better, more humane ways to treat ME/CFS patients.