The Dr. Jekyll/Mr Hyde Virus – The more we learn about XMRV the more we can see how it could excite retrovirologists; it doesn’t appear to be like anything they’ve come across. XMRV is clearly not HIV; HIV is a lentivirus (not a gamma-retrovirus); HIV replicates well in immune cells (thus wiping out the T-Helper cells) – XMRV does not. A much complex retrovirus HIV has nine genes it can use to wreak havoc in the body – XMRV has only three. HIV replicates and mutates enough to often evade detection from antibodies and cytotoxic T-cells. XMRV appears to be almost genetically uniform thus setting, at least in the blood, a clear target for the immune system.

HIV produces high viral loads in immune cells but XMRV produces such low viral loads it’s quite difficult to find it using PCR. HIV’s genes enable it to hijack a T-cells DNA and force it to become an HIV replication factory; a recent study indicated that XMRV simply doesn’t have the genes (think software) needed to turn immune cells into XMRV replication factories. Given that it’s not surprising that XMRV levels are very low in immune cells of the blood (PBMC’s) and that it’s very difficult to get XMRV to replicate in them.

Yet Dr. Mikovits has repeatedly warned us that none of three human infectious retroviruses found are benign; all have caused serious diseases in at least a portion of those infected. So how does XMRV do it’s damage? Of course, we’re still very early in the study of this virus but Dr. Mikovits posited several ways this very different retrovirus could cause problems.

Off to a Bad Start – Some retroviruses randomly insert themselves into different parts of the cell’s DNA but gammaretroviruses like XMRV tend to insert themselves into the regions of the genome that control gene activity; thus it’s possible that simply by infecting a natural killer or other immune cell – and thus up regulating or down regulating different genes – XMRV could cause quite a variety of symptoms and problems. &

More alarmingly, a 2007 study found XMRV often inserts into sites loaded with ‘oncogenes’; gene’s who activation causes cells to proliferate, possibly turning them into a cancer cells. This process called insertional mutagenesis may be why gamma retroviruses in mice appear to be associated with increased risk of cancer. Gamma-retroviruses don’t always insert themselves into regions containing oncogenes but they show a tendency to do so. Thus, while XMRV may be more primitive than other retroviruses, it may have the ability to alter cell functioning simply by infecting a cell and turning on and off genes in the cell’s DNA. 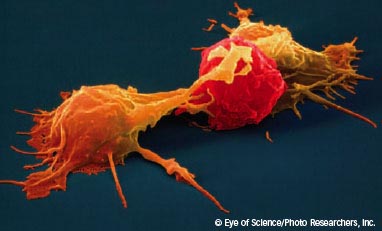 Immune Exhaustion – Dr. Mikovits noted that a virally infected cell puts a viral protein (called an antigen) on it’s outer coat to to signal the immune system that it’s been infected. Dr. Mikovits proposes that as XMRV infects more and more natural killer cells that a kind of cascade of events happens to increase the number of these antigens on the cells outer coat. Interestingly, the presence of high antigen levels during a chronic, unresolved retroviral infection have been shown to result in dysfunctional T- cell ‘s – a process that’s been termed ‘immune exhaustion’. The Fletcher/Klimas natural killer cell studies suggest a similar process is occurring in the natural killer cells (and, they believe the T-cell’s) of CFS patients. It’s possible that even if the viral loads of XMRV infected cells are low, if the coats of those cells are still dotmarked with XMRV antigens then over time immune cell exhaustion could occur.

If I’m reading the transcript right Dr. Mikovits also believes these antigens are sparking an immune response – which is what they’re designed to do – which is creating neurotoxins and these may be causing the problems in ME/CFS. (In some infections the immune response to the virus ends up being more destructive than the virus itself).

Essentially XMRV is causing problems simply by being present in the cell; it may be able to alter an immune cells functioning by altering its gene expression when it integrates itself into the cell’s DNA, and it may be able to stimulate a destructive immune response when the cell deposits its antigens on the cell’s surface.

Cancer – Throughout its history chronic fatigue syndrome (ME/CFS) has not typically been associated with cancer. Dr. Byron Hyde has reported an increased incidence of thyroid cancer but he seems to be alone in finding that. In 2009 researchers associated with the Whittemore-Peterson Institute reported they’d found a statistically increased incidence of a very rare cancer in Incline Village residents with CFS. On the other hand, a statistical analysis of CFS patients in Washington in 2006 did not find an increased risk of cancer or early death. Another less rigorous 2006 study examining self-reported deaths of ME/CFS patients on a website found an increased of heart failure, suicide and cancer and early death.

The evidence for increased cancer rates in CFS patients in general is still not strong; it comes from the study of one cohort in one locality and an online death registry for self-reported chronic fatigue syndrome patients and a few anecdotal reports. On the other hand, the evidence that cancer rates are not increased in the disease is not strong either; while few longtime ME/CFS physicians have reported increased cancer rates (Dr. Hyde reported increased thyroid cancer) this area – as with so many others – has hardly been researched with any rigor.

The Hormonal Question – the WPI use hormones to stimulate the virus in their cells to grow – an intriguing factor given the increased prevalence of this disease in middle-aged women, the HPA axis findings in the disorder and the finding of XMRV in the prostate – a hormone sensitive tissue. Dr. Mikovit’s mentioned androgens, cortisol, progesterone and testosterone but left the door open for other hormones. She also mentioned the many estrogen-like products in our modern world.

As a side note it’s remarkable how little study female hormones, in particular, have received in this disease. Despite the fact that the NIH’s CFS research program is housed in the Office For Research On Women’s Health (ORWH) the ORWH has done nothing to encourage research focused in this area (or indeed in most areas). A couple of studies do suggest that an estrogen connection may be present but the research is very limited. Count on XMRV to break open this area of study if XMRV proves to be a significant factor in chronic fatigue syndrome.

The hormonal implications of XMRV, of course, bring us back to the stress response – an area that has received some research in ME/CFS. Dr. Mikovits reported that cortisol – the key stress hormone of the HPA axis – turns on XMRV. Cortisol has well studied in chronic fatigue syndrome – at least mildly low levels of cortisol are common and several studies suggest that some ME/CFS patients may have a genetic predisposition to abnormal cortisol production.&

But t’s hard to parse together XMRV activation with the low levels of cortisol and other hormones often found in this disorder. Supplementing hormones – increasing ones hormone level – in fact, is not an uncommon therapy in this disorder and is helpful for some. In an email Dr. Mikovits suggested that hormonal balance may be more of an issue than the levels of any one hormone.

A Blood Vessel Connection? Emory University is apparently big in the hunt for XMRV. We know that XMRV is able to infect cells called fibroblasts in the prostate but that epithelial cells express a lot of antigens (markers on their surface suggesting that they are infected) as well. Dr. Mikovits talked about an amino acid ‘loop’ that XRMV used to gain entry into cells. This team showed that fibroblasts had this loop but the other cells – which appeared to be infected – didn’t, which suggested to them that XMRV has more than one way to get into a cell. What’s so interesting about these other cells? They happen to be smooth muscle cells; the cells that dot the linings of our blood vessels and tell them to open up or constrict. Researchers have conjectured the blood vessel problems could cause many of the abnormalities in the brain and elsewhere in CFS and are exploring their functioning in work funded by the CFIDS Association of American and the NIH.

The NIH has talked about the need for an animal model of CFS for many years; this is essentially an animal they can give CFS to and then study it in detail to try unravel what’s going. They’ve ever done a darn thing about it – no surprise there – but the Japanese are using a rodent model to study this disease. Rodents are cheap and easy to work with but this group is already using a primate (rhesus monkeys) to see what happens when they’re infected with XMRV.

Primates, of course, share many more characteristics with humans than rodents do and they’re also much, much more expensive. The fact that this Emory University researcher is already using primates suggests they’re quite serious about XMRV. Not that the monkeys can have been happy about it; they were infected intravenously with XMRV and then ‘harvested’ from a week to a couple of hundred days later. The researchers then did an extensive search for XMRV in their tissues.

They found that XMRV had spread throughout the body by day six infecting the lungs, liver, spleen and lymph nodes. Three weeks later it was concentrating in the gastrointestinal system and the urinary and reproductive systems. Ultimately mostly set up camp in the lymphoid organs and the reproductive organs (prostate, testes, cervix, vagina).&

Interestingly, XMRV chose different pathways in different parts of the body, infecting T-cells in the lymphoid organs (spleen, thymus, bone marrow, gastrointestinal system etc.), macrophages in the lungs and epithelial cells in the reproductive organs. Interestingly viral loads appeared to reduce over time in the lymphoid organs (was the immune system fighting it off?) but increased over time in the gut. This followed with the WPI’s findings of low XMRV’s loads in the lymphocytes; could it’s viral reservoir be the gut? Unfortunately the brain tissues were not searched.

Interestingly, XMRV infection in primates has thus far not produced any visible symptoms – no fevers – no real suggestion of an infection.span>

Immune Agents Whap XMRV – a Columbia University study suggested that a powerful immune agent called interferon-beta may be able to knock down XMRV. This is an interesting finding given that RNase L – an enzymatic part of the interferon pathway – is wiped out in many CFS patients. While studies do not suggest that RNase L. abnormalities play a role who gets infected with XMRV they could affect which cells it infects. Dr. Chia has an reported success using interferons in some patients. (Dr. Chia is now using Oxymatrine and reporting better results).