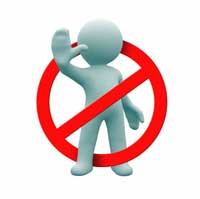 I submitted an Freedom of Information Act (FOIA) request in 2007 out of frustration at the low number of CFS studies funded by the NIH. The goal was to figure out where the roadblocks in the CFS grant funding process at the NIH were.

The request was complicated a bit because it included the period when an NIH approved RFA for Neuroimmune research into CFS was in effect. In an RFA the NIH states they will provide X number of dollars to research a subject and grants entered under an RFA typically have much higher success rates than those entered under the normal ‘program announcements’, which have no guaranteed funding. Because RFA’s in CFS are rare most researcher grants for CFS are submitted under ‘program announcements (PA’s). First we’ll look at success rates for RFA’s and PA’s combined and then at each individually.

A Very Low Reward Rate – The overall first-time grant success rate for CFS researchers was 8/57=14%. Even with the special grant package of 2006 (RFA) the NIH managed to fund on average just over 1 new study a year on CFS with eight studies funded from 2003-2007.


The Biggest Single Roadblock – the CFS SEP Panel – The biggest single roadblock for CFS researchers was getting past the initial review panel. Of the 57 new CFS grant applications over half (29) were stopped at the review panel stage for various reasons (triage reviewed non-competitive/application withdrawn).

Consistently Unable to Get Past First Base – High rates of ‘triage reviewed non-competitive’ grants – the most common fate (@30%) was to be ‘triage reviewed non-competitive’ – a designation which indicates that the grant basically didn’t get past first base; the review panel unanimously these grants agreed fell into the bottom fifty percent in terms of quality. They were given comments but not a full review and were returned to the applicant unscored.

The Climb Steepens – Those that got past the CFS SEP faced an even steeper challenge at the next step of the process – getting funded. CFS grants get funded by passing muster at the Trans-NIH Working Group which consists of a variety of Institute review boards.

From 2003 – 2007 the 28 new CFS grants that appeared before the Institute Review Panels had a 28% of getting funded. (The Institutes funded 28%, rejected 46% and placed 26% in an unfunded holding category (Pending Award) which meant the grant could be funded at a later date (but rarely if ever was).)

That’s actually not that bad…and neither is it really accurate. As noted above RFA’s are very rare in CFS. The last one was in 2006…….If you want to figure out what the typical CFS researcher is up against you have to look at grants submitted under the CFS “program announcements’.

A more detailed look indicated that all stages of the process were easier under an RFA.

Halted at the CFS SEP Stage:


Conclusions – A big hurdle for CFS research was removed with the much improved makeup of the CFS SEP. Not only should grants get better (and more appropriate) scores but the new CFS SEP should also give ME/CFS researchers hope, thus increasing the number of grant applications under review, and considerably increasing the number of grants passed up to the Trans NIH Working Group for approval – where historically they’ve had about a 25% chance of getting funded. That should help greatly.

A Big Opportunity – This survey indicates that RFA’s are a kick in the pants for CFS; not only do they represent new funding on top of the normal funding levels, but with both the CFS SEP and Trans NIH Working Group viewing RFA grants much more favorably than PA grants, funding rates should go up dramatically.

The best single opportunity in the upcoming years for a dramatic increase in funding is the multi-year CFS RFA which will be based on the State of Knowledge Workshop in Apr/May of next year. The last RFA in 2006 could have doubled funding levels for CFS. It failed to do so for various reasons but the next RFA should present a similar opportunity.

Vigilance Required – The last RFA was ‘ordered’ in 2003 but not funded until 2006. The ME/CFS Community is much more vigilant and pro-active now; this time we have the opportunity to help ensure that the RFA is produced and funded quickly and at appropriate levels.