I overdid it this past weekend, and paid for it on Sunday. Nothing about this disease is predictable, except the unpredictability of it I guess, but I was feeling so good after Treatment #18 I actually got suckered into thinking I was “normal” last week. Big mistake. Talk about a roller coaster ride! 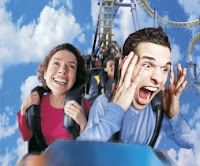 When I was young I lived in Southern California and loved going to the theme parks in and around Los Angeles. My favorites were the roller coasters and one day, a new bigger, badder, more bodacious one opened up at Magic Mountain that I just had to try. It had some fantastic official name but the workers there just called it simply “the puker.” Of course that made me want to ride it all the more, until while in line to get on, I noticed two workers standing at the ready with mops and buckets. I kid you not – this roller coaster was so hair-raising that they had two permanent workers who mopped up vomit as the coaster returned to base! That was their job, every 2 minutes as the cars came back, to clean up the mess.

I wouldn’t have believed it had I not seen it with my own eyes… but sure enough, as the lead car came to its screeching halt after 75 seconds of full throttle g-forces, the teenage girl sitting in the front let her lunch fly and these two guys were cleaning it up faster than you could say “exit to your right.”

As I loaded the same car the puker had just left, with the smell still in the air, I asked one of the guys with the mops “What makes people throw up like that, the altitude, or the speed?”

He answered matter of factly: “Neither. It’s usually the abrupt stop. You go from 60 mph to zero and your lunch is still catching up with you. It’s not that bad, really” he went on, “we just mop up the mess after people enjoy the ride.”

I should have remembered the mop guy’s words this weekend. Other patients who have been on Ampligen have warned me about this – that sometimes you can get such a short-term “boost” from this amazing drug that you’ll start to think you are “healed” too early, and start going to fast too quickly. They’ve all told me that the real progress happens after the fourth month, but here I was this past week barely marking two months treatment, and I felt so good that I started filling my calendar up for the weekend. Can you imagine? Stupid, I know. But I had been hoping for this kind of energy for so long, I let my enthusiasm overtake my wisdom.

Coming off my Ampligen drip last Thursday, I felt really energized, so I recklessly attacked life with gusto. Between Thursday night and Friday noon I had long phone conversations with no less than 8 friends and relatives on 3 continents, in 2 languages. I did extra time in the gym, followed by an hour’s deep tissue massage. My brain was working so well I spent a couple hours rehearsing a Supertramp chord progression in my head in bed instead of sleeping. Next morning I went shopping at a local mall, listened to a Czech opera conductor play Gershwin on the baby grand in Nordstrom’s and then came home and worked on my taxes! Can you believe it? Still on this “high,” on Sunday I took a friend with me to church, (a baptist-style congregation where the music is so good it is impossible to sit for very long) and then got a haircut. I was intending to write this blog after that, but then incredibly, the ride came to a sad, abrupt halt.


Like the speed brakes on a roller coaster at Magic Mountain, I hit the wall. I decelerated from 100mph to zero in the blink of an eye. My stomach ached. I dropped the hairbrush, and dropped my pants.

In less than 2 minutes, I went from admiring my new haircut in the mirror, to sitting on the toilet with abdominal cramps. Not only did my glute and leg muscles hurt, but my bones hurt too. My head was throbbing, my neck ached, and in all seriousness, it even felt like my teeth hurt. The ringing in my ears and the overall malaise confirmed it – I was crashing big time. It was shocking how quickly things turned south. From soaring at light-speed with my hands in the air, to squatting over the commode with my hands holding my head, in just a few minutes time.

At first I tried to go through the usual denial mechanisms we all use, like telling myself all I needed was some dinner. But when I couldn’t get up the energy to find my glasses to read the dials on that fricking chinese GE oven with the tiny little numbers on those infernal tiny little dials, I realized I was toast; so I just plopped down on the sofa. For a moment, in complete denial, I thought of getting up and trying to distract myself by writing this blog. Ridiculous. Had I done so it would have looked like this: “*@$&^%##@^$*&$@_)_**^)(&@*!!!!!!!“

Then the downward spiral of interconnected reactions set in, and I had a real, bona fide crash.

You know what I mean, right? After the physical symptoms rear their ugly heads, the other ancillary parts of our “being” feel the need to participate. So next, my emotions got involved, in the form of anger about the fact that I was on the couch again. Then the concomitant sadness that usually follows anger kicked in, which made me feel even sicker. Followed by its ugly twin, “guilt,” beating me up mentally with the refrain “How could I have been so stupid?”

If that wasn’t enough, a thunderstorm rolled in, dropping the barometric pressure like a stone, and with it, my quickly souring disposition. Yes, barometric pressure changes do affect people with viral challenges like myalgic encephalomyelitis, usually in a bad way. So with no “joy endorphins” firing, and whacked out serotonin, dopamine or whatever the gamut of emotional brain chemicals are, my physical aches and pains felt even worse.

To say I was “down” would have been an understatement, but I had one glimmer of light at the end of the tunnel – hope.

Jean Kerr says “Hope is the feeling that the feeling you have isn’t permanent,” and I had that definition of hope in two ways.

First, because I know God didn’t bring me halfway around the world to come to this town to not get healed, I had this deep settled confidence that this was just a bump in the road, and it would pass. Because I believe in God and in His plans for my future, I can look at bad days in the framework of eternity.

Second, I had hope because I knew something about what was coming.

Even though I was on the couch, mindlessly surfing cable channels, I knew if I could get through the night, things would be better tomorrow. Not just because it would be a new day. Not just because the night was over. But because tomorrow morning, I was scheduled for my regular Monday morning infusion of this amazing drug called Ampligen.

Having been here now on this chemical for 2 months, I knew that it worked, and that it worked fast. So I actually slept a few hours last night, on the hope of this morning’s treatment, and the relief it would provide. And that’s the amazing part – it worked even faster than I had hoped!


Before the first 100ml of Treatment #19 had been dripped into my veins this morning, I actually felt better. More accurately, as incredible as this may sound, as the first 100ml was entering my veins, I could feel myself get progressively better! I could discern the body aches diminishing; I started conversing with the nurses and patients, and I found my sense of humor returning. By the time all 400ml was in, and the saline and magnesium were finished, I was completely pain free.

I was stupid this weekend, without a doubt. I went to far, too fast. But thankfully, I had Ampligen today to mop up the mess I had made after my ride.