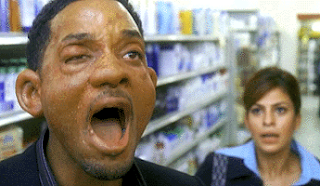 I never heard the phrase “allergic cascade” until 10 days ago, when I woke up with a nose so swollen with mucous that I literally could not blow it out. Seeing my distorted face in the bathroom mirror, all I could think of was that classic scene in the movie “Hitch” where Will Smith’s head reacts to his shellfish allergy by exploding to twice its normal size, and he starts guzzling antihistamines.

Allergy season, huh? They warned me about this little side-benefit of living here on the East Coast of the USA, but like every other “little” physical challenge we face, this seemingly “minor” irritant became a huge problem for me, because of the immune system issues it portended.

It started pretty innocently – the meteorologist on TV the night before said that “pollen levels will be the highest on record in more than 25 years, ” but since I had never been bothered by Springtime allergies in the past, I didn’t pay much attention.

“Normal” average people all over this town were sneezing and stuffy, complaining of the extreme allergic reaction to the visible pollen in the air. But as you well know, we are not “normal” or average. We have immune systems that are already ramped up, and I have the additional issue of having an immunomodulating drug called Ampligen basically stirring things up like a hornet’s nest on top of it all.

I knew I was in trouble when I decided to carry a roll of toilet paper around with me all day- so continuous and heavy was the flow of snot literally pouring out of my nose. Not only did I have to fight the usual Ampligen provoked flu-like symptoms of headache, sore back, and muscle-aches, now I was wrestling with the added kicker of a completely closed nasal cavity and swollen sinus passages. I not only couldn’t speak intelligently, I couldn’t hear myself speak unintelligently, and I couldn’t figure out how to eat and breath at the same time.


If you want to simulate what I was feeling, put your head completely underwater during your next bath, use your fingers to close your nose,and then try to eat a chicken leg. Then try talking.

But that wasn’t the worst part. Blocked sinuses in turn affected my sleep, because as my mother would tell you, I have never learned how to breath through my mouth when sleeping. With my nose completely plugged up, I had to literally “prop” my mouth open with the edge of the pillow, to try to get small amounts of sleep in. I can now tell you 8 different ways to make a “jaw wedge” out of linen that would rival any tool in a dental office.

But of course those breathing solutions were short lived, because after a few minutes, as I’d enter REM, my mouth would shut by habit, and I’d jolt awake gasping for air. My wife told me the first night she stopped counting after being entertained by this drama a dozen times the first hour, and after me telling her to “stop waking me up!” Which, with my snot problem, sounded to her something like “Shlop shwakige mhee huah!”


Relief started to come, albeit on a very temporary basis, when a friend recommended a nasal spray called “4-way”, which is basically just a pseudo-epinepherine mist that shrinks the nasal passages for about an hour. Using that life-saving spray, (which by the way does not have adrenaline properties), I was able to take cat naps during the night, and talk on the phone occasionally. Without it, I sounded like Elmer Fudd, and no one ever truly believed it was me on the phone.

The only good thing out of having my nose completely plugged up was, without a sense of smell, I didn’t enjoy eating at all, so my pot-belly began to shrink.

Studies show that allergies are more common in people fighting fibromyalgia and CFS or M.E. Some have even gone so far as to say that food or environmental allergies can predict CFS/M.E. The fact of the matter is, whether it is a virus, or a mold spore, or pollen that enters our systems, our body’s reaction is essentially the same – to send “troops” to oppose the invader. The immune system immediately reacts to whatever the invader by producing several types of cytokines, including interferon alpha and tumor necrosis factor.

Cytokines are small proteins that can either step-up or step-down the immune response, but they also cause things like inflammation of tissue, tiredness and body aches. If the allergic response goes on long enough, or is in an environment of TH2 predominance as opposed to TH1 (most CFS/M.E. patients are in a chronic state of TH2 shift) the situation becomes an “Allergic Cascade.”

Using the term “cascade” for what I went through makes it sound like a pleasant float trip or an enjoyable white-water ride. Trust me, this was no fun. I’d prefer to call what I experienced an “Allergic Drowning,” because until today, I was fighting for air and breath every moment.

Today, after my Ampligen infusion, (which was #26) and a squirt of nasal spray, I am finally breathing normally through my nose. I no longer look like Will Smith. I no longer sound like Elmer Fudd. And with my sense of taste returning, my belly is starting to return to its new found pot-belly shape!