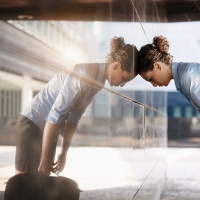 (In part III of Jennie’s series on post-exertional malaise she tackles the always tricky question of cause. Kinesophobia – fear of movement – and deconditioning are present in some CFS patients but neither appear to be the cause. Instead Jenny points to several abnormalities in pain processing, oxygen consumption and the immune and suggests the answer may be a complex one that involves multiple systems. You can find her original article here. Thanks to the CFIDS Association for allowing us to repost this intriguing series)

Post-exertional malaise (PEM) is one symptom of chronic fatigue syndrome (CFS), but is itself more complex than a single symptom. Patients experience fatigue, pain, cognitive difficulties, sore throat, and/or swollen lymph nodes after previously tolerated physical or mental activity. These symptoms may appear immediately after the activity or after a period of delay, and may last days or weeks. This article, the third in a series, examines what mechanisms may cause PEM.

What is not the cause?

As discussed in Part 2 of this series,1 PEM is a self-reported symptom without a clinical test to easily measure its occurrence and severity. Understandably, patients do not want to exacerbate PEM, and many reduce their activity levels or avoid certain activities altogether. This is a predictable response to PEM, but the pattern lends itself to theories that phobias or deconditioning actually cause PEM, or even CFS itself. Such theories, however, are not supported by research data.

Kinesiophobia, is defined as “an excessive, irrational, and debilitating fear of physical movement and activity resulting from a feeling of vulnerability to painful injury or reinjury.”2 One theory claims that CFS patients avoid activity or exercise as a result of irrational fears. These fears can be objectively measured using the Tampa Scale for Kinesiophobia, originally developed and validated for use in patients with lower back pain. Researchers have adapted the Tampa Scale for use in people with CFS (PWCs), and some PWCs do appear to have a high level of kinesiophobia.3

If kinesiophobia causes PEM or CFS, then one would expect patients with higher Tampa scores to be more disabled, have lower exercise capacity, and have more anxiety associated with exercise. While patients with kinesiophobia do report more activity limitations,4 the other hypotheses are not supported by the data. High Tampa scores do not correlate with higher measures of disability, higher levels of exercise-related anxiety, or lower measures of exercise capacity. Even a study that proposed a cognitive-behavioral model for CFS admitted, “no evidence of exercise phobia was found” in subjects with CFS.5


Physical deconditioning is the loss of fitness caused by a reduction in activity. By definition, CFS is an illness that substantially reduces the physical activity of the patient for a minimum of six months, and so every PWC experiences at least some deconditioning. One proposed explanation for CFS is that it is a self-perpetuating cycle of activity avoidance leading to further deconditioning, which in turn reduces the amount of activity that can be comfortably tolerated. The only way to test this theory is to compare CFS patients with sedentary, deconditioned controls. If poor fitness perpetuates CFS, then patients should exhibit more severe deconditioning than the controls. However, a study designed to test this hypotheses showed the opposite: there was no statistically significant difference in physical fitness between CFS patients and sedentary controls, based on several measures of exercise capacity.6

Another study used exercise tests on two consecutive days to examine the performance of patients and controls, and found a sharp decrease in performance by the CFS patients in the second test while controls showed no such decrease.7 The authors stated, “The profound reduction in physical activity that accompanies CFS symptoms certainly results in deconditioning. In isolation, the similarity of results between patients and controls for the first test in this study do not contradict a deconditioning hypothesis for CFS performance. However, the fall in oxygen consumption among CFS patients on the second test appears to suggest metabolic dysfunction rather than a sedentary lifestyle as the cause of diminished exercise capacity in CFS.” This conclusion underscores the need for the use of the test-retest study design in order to reveal an accurate picture of CFS-related impairments.

So what might cause PEM in reaction to activity?

It is now generally accepted that CFS involves disruptions and disturbances of multiple body systems. Research on the physiological responses to exercise in CFS patients supports this principle, with demonstrated abnormalities in the central nervous system, cardiovascular and energy metabolism system, and immune system.8

Central nervous system – When CFS patients and sedentary controls are asked to rate their perceived level of effort during an exercise test, PWCs perceive a higher level of exertion than controls.9 This is true even when heart rate and other measures between the groups are similar, and suggests impairment of the mechanism that contributes to effort sense. Studies that demonstrate exercise lowers the pain threshold in CFS patients also suggest abnormalities in central pain processing.10

Cardiovascular/Energy system – Studies have found that peak oxygen consumption and maximum capacity for oxygen consumption are lower in CFS patients than controls.11,12,13 Patients have difficulty achieving their predicted target heart rate, and their maximum workload at exhaustion is substantially lower than controls. The average level of maximum oxygen consumption in patients was similar to patients with chronic heart failure and other conditions.14 Research has also suggested that muscle energy metabolism is impaired, as evidenced by higher levels of lactate and other measures of oxidative stress.15

Immune system – Research provides evidence for associations between measures of intracellular immune deregulations and exercise performance in CFS patients.16 A 20-minute bicycle ride caused increases in the levels of the immune protein C4a in CFS patients (but not controls), and the increase was significantly correlated with the severity of post-exercise symptom flare. C4a increases in healthy athletes as well, but after intense exercise such as a 2.5 hour run.17 A high symptom flare after exercise in CFS patients correlated with elevated levels of six immune cytokines; neither controls nor patients with lower levels of symptom flares showed the same cytokine activity.18

Some CFS patients do have kinesiophobia, and many are likely deconditioned. But neither factor explains PWCs’ physiological response to exercise. In contrast, multiple abnormalities have been detected in the systems involved in the body’s response to physical activity. What do these many observed abnormalities really mean? Are they (in sum or in part) the cause of PEM, or merely the observable effects of some other process?

Davenport and colleagues suggest an integrative conceptual model in which “a spectrum of aerobic energy system impairments may be responsible for the reduced tolerance of physical activity.”19 Any theory of the cause of PEM must take into account the multiple genetic, cellular and systemic abnormalities that are associated with the PWC physiological response to exercise. It is probable that maladaptive responses in one or more body processes leads to the reduced tolerance of physical activity and cascade of symptoms associated with PEM.

No definite answer has been found, and more research is needed to understand the root causes of PEM. In the meantime, CFS patients are left to focus on how to manage, treat or avoid PEM themselves. These issues will be examined in the fourth article in this series.