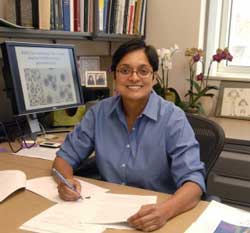 A Little History – Dr. Singh has quite a history. She’s been at Stanford and Yale and Columbia (where she was Dr. Racaniello’s colleague) and is now a clinical pathologist at the University of Utah. She spends 80% of her time in her research lab searching for pathogens people and also directs an HIV team.

Her interest in XMRV-like viruses began with her work in murine leukemia viruses in Columbia and she’s been a key figure in the search to determine whether XMRV plays a role in prostate cancer. Too busy for something extra? Not at all – she’s now focused heavily on XMRV’s role in chronic fatigue syndrome.

The Problem! – Her biggest problem with XMRV is that the virus is found in such small amounts, making it very hard to detect. (Of course her concerns echo what the WPI has been saying for months now.) The problems detecting XMRV now, she believes, are simply giving us a glimpse of how future viruses fare; the easy viruses to find – the ones present in abundant amounts in the blood have already been found. The tests that find the next round of viruses will need to be very sensitive and very specific; it almost sounds like they are pressing the limits of their technology.

(Indeed, there is some evidence they are in PCR; one of her guests reported how interesting her finding was that immunohistochemistry slides were more effective at finding XMRV in prostate cancer tissues than PCR – the supposed gold standard for pathogen testing. Dr. Mikovits earlier noted that antibody tests pick up evidence of XMRV where PCR tests do not…PCR will obviously remain a huge player in pathogen detection – as Dr. Racaniello noted, it’s cheap and everyone knows how to do it…..but it’s limitations appear to be showing up in these rare viruses.)

Dr. Singh noted how much more difficult it was to find something in the blood than in a prepared plasma template. Except for the WPI’s Science paper, my understanding is that all the later studies showed they could find XMRV in a prepared sample – and then looked for it in the blood. Dr. Singh clearly didn’t believe that that was sufficient and she felt the difficulty that the complicated matrix of the blood poses for detecting these rare viruses was probably the biggest reason that people get different results.


(Did that statement give us a clue about the results of her study? (We know that at least one set of results is in). One could infer from her statement that the problem rests in the inability of the other groups to do something that’s quite difficult – tease out very little bits of DNA from a very complex substrate – the blood. It indirectly suggest that she, at least, has been able to find XMRV in her blood samples but we shall see.)

The Singh/Light/Bateman Study – one of the questioners joked about her ’secret’ study that everyone knew about. This study or rather set of studies is much more comprehensive than we knew. (We knew that they are being very careful and that it was pretty extensive but no more. CBS in the Phoenix Rising Forums reported they actually used a stopwatch to time between when they drew his blood and when they processed it.)

The Autopsy – her autopsy study underscores how quickly the research community can cover all the bases when they really engaged in something. It may seem like XMRV research is happening very slowly but it’s actually happening at light speed relative to other areas of CFS research. If XMRV was a typical CFS research subject we would have had one study happening in 2009, another study being completed in 2011 or so and if those were successful maybe a study or two a year from there on in (or maybe nothing!). We’ve already had five or so fully completed studies in nine months. That’s at least five years of work in just over half a year. The search for XMRV demonstrates what’s possible in CFS if the research community could only get engaged.

Dr. Singh is examining the first 75 male and female corpses that she has access to, to see where, if anywhere, XMRV is present. The primate study showed that XMRV quickly infects many parts of their bodies. None of them got sick in the short time that they had the virus but the potential was clearly there for the virus to do mischief over the long term.

Now she’s doing a somewhat similar study on humans. (She can’t infect humans with the virus but she can check out their tissues after they died.) This is a fascinating first shot at determining if XMRV contributes to disease (and undoubtedly must be quite expensive). Is XMRV present in the heart tissues of people with heart problems or in the brains of people with neurological disease or ?????

The Blood Study is very large (100 patients, 200 healthy volunteers) and thorough. Using some of the same tests found in the the Science paper, she is doing multiple PCR tests including RT PCR and viral RNA. She is also doing the culture tests using LnCap cells to grow the virus; the LnCap test is one of the tests the WPI has been frutlessly, thus far, asking everybody to do. She’s also doing antibody tests presumably with the antibodies she’s been developing.

When asked about the problem of defining CFS she agreed ‘It’s very hard’ and noted that she (no doubt working closely with Dr. Bateman) is trying to put patients in different severity groupings.

She noted that they really have no idea where the virus is or isn’t in the body. Right now they are looking in every way they can in the blood but it could easily be more plentiful in other tissues. (Dr. Chia’s experiences with enteroviruses come to mind. Yes, he was finally able to find one lab that he felt was able to pick enteroviruses up in CFS patient’s blood but when he actually looked at stomach tissue samples there they were in clear view – easy to find!). She noted that the key tissue in CFS patients could very well be the brain.

A Clever Collaboration with the WPI – She and Dr. Mikovits have also devised a clever collaboration wherein the WPI has a phlebotomy company takes blood from patients that have tested positive for XMRV and then ships it to Dr. Singh to test. That way Dr. Singh bypasses the WPI’s facilities completely while still trying to validate their results.

A Treatment Trial?– Dr. Singh is talking – just talking – with MERCK about possibly funding a placebo-controlled, double blinded anti-retro viral clinical trial. (One wonders if a researcher who was not finding XMRV would even contemplate such a thing? )


The ‘Desperate’ Patient Community – the word desperate came up again with reference to the patient community. The willingness of some patients to embark on anti-retro viral trials has apparently really made a dent in the mind of the medical community! Patients want an answer! They get it….Dr. Singh stated that she ‘senses their desperation’ and noted that ‘ huge numbers of people ’in the US have this condition and that they don’t just want treatment – they want a clear test for CFS.

Patient Questions – Dr. Racaniello noted that he got 60 or so e-mails containing multiple questions.

All in all, Dr. Singh looks very much like someone we would want leading an XMRV study. She’s working with one of our top practitioners (Dr. Bateman), she’s looking as hard as she can for the virus, she’s careful in her statements yet she empathizes with the patient’s need for movement in the field and she’s got a great background. She even takes a nice picture. What’s not to like? :)