Epstein-Barr Virus (or EBV) was the first major disappointment for CFS researchers. Several studies in late eighties suggested EBV might be the cause of CFS but subsequent studies revealed EBV activation to be no higher in CFS than controls. In recent years, however, like Lazarus rising from the grave, EBV’s role in CFS has been given new life by several research groups that have continued to examined this intriguing virus in greater detail.

EBV has a long history in chronic fatigue syndrome (ME/CFS). The finding of increased antibody levels to EBV in 1985 suggested that a chronic EBV infection caused ME/CFS. Five studies between 1985 and 1988 indicating ME/ CFS patients had increased levels of antibodies to EBV lead to the disease for a time being ca lled Chronic Epstein-Barr Virus (and the CFIDS Association of America being called the Chronic Epstein-Barr Virus Association).

Further studies, however, found that healthy people often had similar antibody levels and later studies found no evidence of unusual EBV reactivation in ME/ CFS.

The inability of researchers to find EBV DNA in the throat washings of CFS patients – a common finding in immunosuppressed subjects – suggested ME/ CFS patients were not subject to high levels of EBV reactivation. Importantly no studies were able to link antibody levels or viral load to symptom severity in the disease and interest in EBV as a causative agent waned.

Two research groups have maintained interest in EBV, however, and the recent CDC sponsored Dubbo studies have once again brought it to the fore. There are at least three ideas regarding EBV and ME/ CFS:

The presence of Epstein-Barr Virus (EBV) in our saliva makes EBV infection common. Indeed EBV, or as it is now called human herpesvirus 4 (HHV-4), infection is almost ubiquitous. EBV, which was discovered in 1964, resides in resting (memory) B-cells, usually for life. Early in the infection EBV turns on genes that produce new viruses (virions) that go on to infect new cells. By the time the immune sytem knocks EBV it has usually established itself in the DNA of B-cells.

Except for occasional forays at reactivation to reestablish itself in new cells once EBV establishes itself in B-cells it turns its activity levels down enough to run under the immune system’s radar. Everytime the B-cell duplicates, though, the presence of EBV DNA in the cells DNA allows the virus to be duplicated as well. EBV, then, does not need to infect new cells to remain present in the body for life.

The consequences of an EBV infection vary dramatically depending on when it occurs. While a primary (initial) infection during childhood is usually benign, a primary EBV infection during adolescence causes infectious mononucleosis in about 30-40 percent of those infected, and about 10% of those infected come adown with a post-infectious fatigue syndrome or CFS. A recent study found that those that encountered EBV later in life –  i.e. came down with infectious mononucleosis – had a higher risk of coming down with MS than those exposed to it as a child. 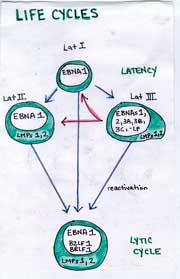 EBV, then, is not as benign as was once thought. Sooner or later most people get exposed to EBV. If you do so as a child you usually have a mild infection, if you do so as an adolescent or adult you have a good chance of getting infectious mononucleosis, and if you get infectious mononucleosis you have a fairly good chance of coming down with post-viral fatigue or chronic fatigue syndrome, and an increased (but still low) chance of getting MS.

A recent paper suggests that the old paradigm; irregular attempts by EBV to reactivate and infect new cells is wrong. This paper suggests that EBV is constantly testing the immune system. This occurs when EBV infected B-cells move into the lymphoid organs (e.g. lymph nodes, spleen) where they get triggered by antigens (pathogenic particles) to transform themselves into plasma cells and produce antibodies.  During this transformation EBV uses the B- cells genetic machinery to produce more EBV virions. This reactivation process is kept in check by EBV spectific cytotoxic T-cells.

EBV reactivation is, however, implicated in several very rare cancers and may be associated with transplant rejection and multiple sclerosis. Several situations, including an impaired innate immune response, physical or psychological stress, organ transplantation and HHV-6 and HIV infection have been shown to trigger the EBV reactivation.