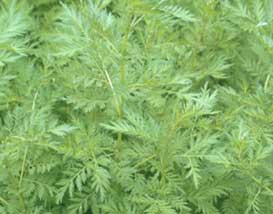 a water-soluble ‘artemesinin’ drug derived from the ‘sweet wormwood’ plant, Artemsia annua, an herb used to treat infections and other illnesses in China for centuries. Interestingly, according to Wikipedia artemsia was lost as an herbal remedy in China until 1970 when an ancient Chinese medical manual dating back to 340 AD was found. The active ingredient in the plant – artemesinin – was isolated by scientists and it anti-malarial properties were quickly noted (1972). It is now used to treat malaria and schistosoma infections.

Artesunate also reduces anti-oxidant activity in the red blood cell thus exposing the cell to high free radical levels. Artesunate is currently being studied as an adjunct to chemotherapeutic agents because of its ability to induce cancerous cells to commit suicide (apoptosis) by inducing high rates of oxidative stress. The ability of the antioxidant NAC to thwart Artesunate’s effects in one study substantiated the important role increased free radical production plays in the drugs effect.

Malaria – Artemesia annua is native to China but has become naturalized around the world including the eastern United States. Artesunate was recently approved for emergency use in patients with severe malaria in the United States.

In April 2009 the FDA approved CoArtem which contains a derivative of artemesinin and a broad spectrum antibiotic called lumefantrine. Upon binding to infected red blood cells artesunate triggers the release of oxygen and carbon-based free radicals that attack proteins in the parasites.


Artesunate’s effects on herpesviruses, however, have not been well studied with just five studies published to date. Interest in this drug appears to be increasing, however, three of the five studies were published in 2008.

Artesunate May Work in Chronic Fatigue Syndrome (ME/CFS) Because..

it may be able to reduce herpesvirus activity in some patients. It’s use, however, is highly experimental.

According to a patient report of an April, 2009 lecture, Dr. Paul Cheney reports that Artesunate is now a key factor in his treatment protocol.