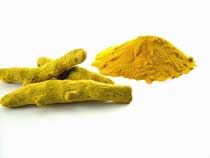 derived from tumeric, a staple of Indian cusine and Aryuvedic medicine for thousands of years. Known for its aromatic, stimulant and carminative properties turmeric has been used in traditional Chinese medicine to treat liver and gallbladder problems and stimulate digestion. Some physicians have recently begun to use curcumin to treat chronic fatigue syndrome (ME/CFS) as well.

The biologically active phytochemical present in turmeric, curcumin was first isolated in 1910. Animal studies suggest it has anti-inflammatory, anti-viral, anti-tumor, antioxidant and anti-ischemic properties – all of which may be of concern in CFS. Curcumin’s ability to reduce neuroinflammation and oxidative stress in the brain may be of particular interest to ME/CFS patients.

Studies suggest curcumin may be able to assist with exercise, learning, overstimulation and depression. Curcumin’s anti-inflammatory properties have been used to reduce the swelling and arthritis and ease muscle pains from exercise. Studies suggest it may be helpful in many inflammatory conditions including diabetes, arthritis, atherosclerosis and inflammatory bowel as well as fibromyalgia and peripheral neuropathy.

Curcumin may have similar effects as anti-Tumor Necrosis Factor (TNF) drugs, some of which are being explored in special subsets of CFS patients and as anti-NF-kB drugs. Some researchers believe that NF-kB, a transcription factor that promotes inflammatory conditions, is overactive in chronic fatigue syndrome (ME/CFS). Curcumin also appears to have positive effects on amyloid production in rodent studies on Alzheimer’s – an intriguing finding given that one study suggests amyloid deposition may be occurring in the ME/CFS patients as well. Curcumin is also a potent nitric oxide free radical scavenger and can reduce F2 isoprostane levels – which studies indicate are high in CFS.

A Patent Court’s ruling that turmeric’s properties were not patentable may have blunted pharmaceutical companies interest but clinical trials are under way in a wide variety of diseases including several cancers, psoriasis and Alzheimer’s disease. Interestingly, a recent study found that curcumin was more effective than a refined metabolite of curcumin called Tetrohydrocurcumin. The study established that curcumin supplementation is the most effective means of receiving this treatments benefits.


Some studies have questioned whether curcumin absorption is sufficient for its effects to take place. A 2006 study found that even ‘high dosing levels’ did not result in detectable levels of curcumin in the plasma. A 2008 study suggested, however, that supplementing curcumin with olive oil, phosphatidyl choline or stearic acid increases curcumin plasma levels 11-fold and brain levels 4-fold. Curcumin absorption may be increased when it is not taken with other food. The studies authors suggested that traditional Indian culinary practices of dissolving turmeric in fat while cooking could contribute to reduced levels of Alzheimers in India.

Curcumin Might Be Helpful In Chronic Fatigue Syndrome (ME/CFS) Because….

A Golden Gift of Nature