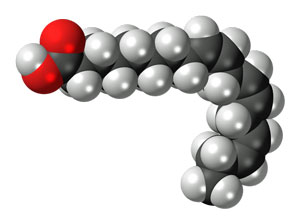 Free radicals are imbalanced compounds that achieve balance by swiping electrons from or giving electrons to other compounds. Because they typically attack the fatty membranes covering cells free radicals can wreak havoc on all types of cells. Once damaged these membranes can emit a variety of substances that further increase free radical activity.

used to produce healthy cell membranes that are less susceptible to free radical attack, to repair membranes quickly once they are damaged, to increase cellular energy production, and to prevent further free radical activity.

Lipid Replace Therapy May Assist in ME/CFS and FM Because..

higher than normal levels of free radical damage (oxidative stress) have been found in both ME/CFS and fibromyalgia (FM) patients. Recent studies also suggest ME/CFS patients have high levels of a type of fat (abdominal) that is associated with high free radical production. LRT could have several benefits in ME/CFS including:

Eye Q – Dr. Puri used a lipid replacement product called called ‘Eye Q’ in his study. He reported that one ME/ME/CFS patient almost totally confined to a wheelchair with high fatigue, poor sleep, muscle pain, and ‘low mood’ began to go into remission about six to eight weeks into the program. At 16 weeks her depression score had dropped from 27 to 3 and she reported that her sleep was much improved. Her muscle pain, however, was unchanged. Comments from a group of four ME/CFS patients after 12 weeks of therapy ranged from the startling ‘the fogginess of the brain was gone completely’ to the hopeful ‘for the first time a feeling of well being was experienced’ to the more mundane ‘I am able to communicate during a relapse.’

Dr. Puri also tells a remarkable story of a 20 year old who had become increasingly suicidal despite using a variety of anti-depressants. One month after starting 4 g of eicosapentoaenoic acid a day his suicidal thoughts had disappeared and nine months later all his symptoms had disappeared, his depression rating, formerly at 32, was zero, and a brain scan indicated that substantial changes had occurred.

The Supplements – Many omega oil supplements are available. The two portrayed in these studies are:

While not a cure omega three fatty acids with low omega six fatty acid levels may benefit some ME/CFS patients. Fatty acids derived from fish oils should be filtered to ensure no mercury is present.