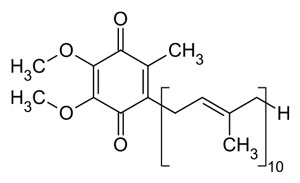 an important factor in cellular energy production and is (in its reduced form (CoQ)) an antioxidant as well. Clinical trials involving Co Q10 have taken place in over 20 disorders including high blood pressure, Alzheimer’s, cardiomyopathy, heart failure, AIDS and mitochondrial diseases. According to the Mayo Clinic COQ10 has had positive affects in many small trials but more research is needed before recommendations can be made regarding its use.

Co Q10 May Work in Chronic Fatigue Syndrome (ME/CFS) Because..

A small 2012 non-placebo controlled Spanish fibromyalgia study found reduced CoQ10 and increased oxidative stress levels in  FM patients.  300 mgs of CoQ10 daily (divided up into 3 doses) resulted in about 50% pain reduction, increased (but not normal) CoQ10 and ATP levels and normal lipid peroxidation (oxidative stress) levels.  There are many anecdotal reports of its beneficial effects and CFS practitioners often prescribe it.

Dr. Klimas reported it was the best antioxidant available. Dr. Lapp reported CoQ10 gives about 10-15% improvement in about half his patients.

Reported doses have ranged from 30-300 mg/day often taken in divided doses. Dr. Klimas and Dr. Lapp recommend trying 120 mg/day.  A 2012 fibromyalgia study employed 300 mgs/day. CoQ10 is fat-soluble, so it is better absorbed when taken with a meal that contains oil or fat. It may take up to eight weeks to see effects.

Few reported but may include nausea, itching loss of appetite, fatigue, flu-like symptoms at higher doses. Since Co Q10 may reduce blood sugar levels caution is advised in diabetes or hypoglycemia patients. CoQ10 may reduce blood pressure or lower blood cholesterol levels. If side effects occur try breaking up the dose.