For the past ten years I have been studying chronic fatigue syndrome as an independent researcher. Over the course of several years I developed a hypothesis for the pathogenesis of this disorder that prominently featured the depletion of glutathione. I presented a poster paper on this hypothesis at the AACFS (now the International Association for Chronic Fatigue Syndrome) meeting in October, 2004, in Madison, Wisconsin.

Anecdotal experience of people with CFS who acted upon my hypothesis suggested that while some were able to raise their glutathione levels by various means and experienced benefit from doing so, others were not able to do so. At the time I wrote my poster paper, I was aware of this, and I acknowledged in the conclusions of the paper that there appeared to be factors that were blocking the raising of glutathione in CFS. At that time, I was not sure specifically what they were. I also knew that there was evidence for a genetic predisposition in CFS, but I did not know the details of the genetic variations involved.

Shortly after that, I became aware of the work of S. Jill James et al. in autism (American Journal of Clinical Nutrition 2004 Dec; 80(6):1611-7). They found that glutathione was also depleted in autistic children, that this was associated with a partial block in the methylation cycle (also called the methionine cycle), that this partial block was associated with genetic variations in the genes for certain enzymes and other proteins associated with the sulfur metabolism, and that it interfered with the synthesis of glutathione. They also found that by using certain supplements (methylcobalamin, folinic acid and trimethylglycine) they could lift the block in the methylation cycle and restore the glutathione level.

Upon learning of this work, I became very interested in possible parallels between chronic fatigue syndrome and autism. I attended the conference of the Defeat Autism Now! (DAN!) project in Long Beach, California in October, 2005, sponsored by the Autism Research Institute, headed by Dr. Bernard Rimland. As a result I became convinced that the genetic predisposition found in autism must be the same or similar to that in a major subset of chronic fatigue syndrome, and that the resulting biochemical abnormalities were also the same or similar. As far as I know, the genetic variations in people with chronic fatigue syndrome have not yet been studied in detail or published, but I am optimistic that this will occur soon, because of the rapid advances in the technology for doing so, and because of the current active interest of at least three groups in the U.S. and the U.K. in genomic aspects of CFS.

There are obviously major differences between chronic fatigue syndrome and autism. I believe that these result primarily from the different ages of onset. Autistic children experience onset early in life, before their brains are fully developed. I believe that this gives rise to the very different brain-related symptoms seen in autistic children from those seen in adults with CFS. However, there are many similarities in the biochemistry and symptoms of these two disorders as well, including oxidative stress, buildup of toxins, immune response shift to Th2, and gut problems, for examples.

The triggering factors for autism and chronic fatigue syndrome are also largely different. Although this subject remains controversial, there appears to be substantial evidence that vaccinations (containing either a mercury-based preservative or live viruses, many given within a short period of time) were responsible for triggering many of the cases of autism in genetically-susceptible children (D. Geier and M.R. Geier, International Journal of Toxicology 2004 Nov-Dec; 23(6):369-76; and A.J. Wakefield, several publications beginning in 1997).

In CFS, a variety of triggering factors (physical, chemical, biological, or psychological/emotional) have been found to be involved in various cases, as reviewed in my poster paper, cited above. All these factors have in common that they place a demand on glutathione.

It appears that genetically susceptible persons are unable to maintain normal glutathione levels when the total demand for it is high, and that once glutathione drops sufficiently in a genetically susceptible person, the sulfur metabolism becomes disrupted. In many cases the methylation cycle (part of the sulfur metabolism) becomes partially blocked, and the result can be a depletion of some or all of several important sulfur-containing metabolites, including S-adenosylmethionine (SAMe), cysteine, glutathione, taurine and sulfate.

A vicious circle is thus formed, and the depletion in these metabolites causes an avalanche of pathogenesis, since they all have very important functions in the body. I think that much of this pathogenesis is common between autism and CFS. In autism, the loss of methylation capacity because of the drop in SAMe appears to be responsible for much of the interference with normal brain development.

There is also a major difference in the sex ratio between autism and CFS. In the book mentioned below, Dr. Jon Pangborn discusses possible reasons why autism is more prevalent in boys. In my poster paper, cited above, I suggested a hypothesis to explain the female dominance in the
prevalence of CFS in adults.

I think that the reason why the people who have developed CFS as adults did not develop autism as children (even though I suspect that they have the same or a similar genetic predisposition) is that when they were children, not as many vaccinations were required. The schedule of vaccinations required for children in the U.S. has grown substantially over the past two or three decades, as has the incidence of autism. This is also true in the U.K. 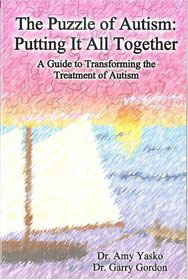 Shortly after attending the DAN! conference, I also learned of the work of Dr. Amy Yasko, primarily in autism, but extending to a number of other disorders as well. Working independently of the DAN! project, Dr. Yasko develops her treatment recommendations by analyzing the specific gene variations in each patient. In addition to studying effects on the methylation cycle, Dr. Yasko has gone on to consider the effects on associated biochemistry, including folate metabolism, biopterin, the urea cycle and the synthesis of neurotransmitters.

My main message is that a great deal has already been worked out in autism by the researchers and clinicians associated with the Defeat Autism Now! project, and also by Dr. Yasko, and that I believe that the CFS community would benefit greatly by looking carefully at what they have already done. The doctors associated with the DAN! project treat autism by the use of nutritional supplements that compensate for genetic mutations in the sulfur metabolism. These include such supplements as magnesium sulfate, taurine, molybdenum, vitamin B6 and its active form P5P, magnesium, methylcobalamin, folinic acid, trimethylglycine, and dimethylglycine. They also use certain diets, and they perform chelation treatments to remove heavy metals. The results in many autistic children have been astounding, as can be seen in the webcast cited below, where several are interviewed.

Dr. Yasko, in cooperation with Dr. Garry Gordon, uses many of the same supplements as are used by the DAN! project doctors as well as some additional ones, including RNA supplements, and she is also reporting great success.

So I want to encourage everyone who has an interest in CFS to look at the results of the DAN! project and of Dr. Amy Yasko in autism.


To view videos of the talks given at the latest two DAN! conferences on the internet at no cost (unless you are paying for the internet time!), go here.

You can choose the more recent Long Beach conference or the earlier Boston conference. They cover much of the same material, but both are worthwhile to watch. If you want to see and hear a good explanation of the methylation cycle research, go to the Boston meeting first, so you will be able to view the talk by Jill James, who did not attend the Long Beach meeting.

After selecting one of the conferences, go to the lower left and register. This is free. They will email a password to you right away, and then you can choose a talk to watch. 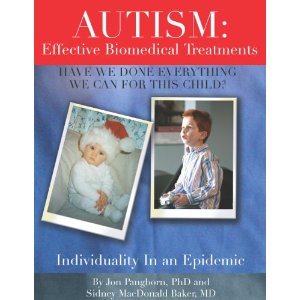 Beyond this, I also want to recommend a book entitled Autism: Effective Biomedical Treatments. This is a new book (Sept. 2005). It is by Jon Pangborn, Ph.D. and Sydney Baker, M.D., a biochemist and an autism clinician, respectively. It is available on Amazon.

This is an excellent book. It is a reference book, full of good information and good science, explained clearly. This book deals very practically with developing a treatment program for an individual child. I think that most of it will turn out to apply directly to adults with CFS as well.

In addition, I want to recommend the book by Amy Yasko entitled Genetic ByPass.  This is also an excellent book. It discusses treatments specifically tailored to the particular combinations of genetic variations found in different patients.

I think these two books complement each other. I would recommend reading the Pangborn and Baker book first, as it provides a good basis for understanding the technical aspects of the genetics found in the Yasko book.

Although I have been suggesting consideration of the DAN! treatments and the Yasko testing to people with CFS for only a short time, and it is too soon to draw conclusions, early feedback is very encouraging. While I am going out on a limb to some extent in announcing this now, I don’t want to wait any longer, because I think this could help a lot of people. Of course, we should all keep in mind that with the current case definition of CFS we have a very heterogeneous population, and the autism treatments will very likely not help everyone who has CFS, but I am convinced that they will help a substantial subset. So I want to encourage those who have CFS and those who treat it to look into this in the strongest way I can. It could be the answer for many of you.

[Disclaimer: I have no financial interest in anything recommended in this article.]