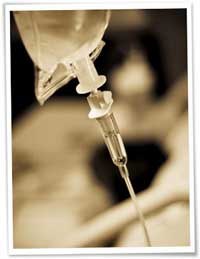 It is the most effective treatment for severe ME/CFS that I have found in my 21 years of looking Dr. David Bell

Saline Solution May Work in Chronic Fatigue Syndrome Because…

it raises blood volume and for other undetermined reasons.

Dr. Bell noted that a year of daily 1 liter saline infusions had enabled a severely ill CFS patient who had been undergoing seizures (which had been characterized as psychological in nature) to return to full-time work. Saline solution’s effects are temporary resulting in a return of symptoms when the treatment is stopped.

Dr. Bell reported that  75% of the 25 patients he’d tried saline solution on had improved.

Many people have reported significant increases in energy and reduced symptoms following saline. One patient suffering a severe relapse after being given general anesthesia for an operation reported being revived 5 weeks later after being given saline solution.

Dr. David Bell “Intravenous Fluid as a Treatment for ME/CFS”