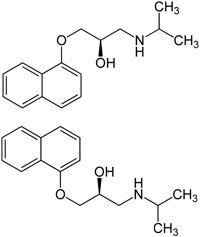 a beta blocker. Developed in the 1950’s Propanolol won its creator a Nobel Prize in 1988.  Used in a fairly wide set of disorders including angina, tremor, migraines and post-traumatic stress disorder Propanolol is most widely used to treat hypertension.  It’s currently being explored as a treatment for malaria.

During exercise, for example, beta-blockers reduce the heart rate and the contracting force of the heart muscle. Beta blockers reduce blood pressure by inhibiting renin release (and thus aldosterone levels) resulting in reduced sodium and water retention. They also have the side effect of reducing anxiety and are used by some performers to tame their jitters before they take the stage.

Propanol’s ability to cross the blood brain barrier means it can effect catecholamine activity in both the circulatory system and the brain. Propanolol may be help in the treatment of post-traumatic stress disorder by reducing norepinephrine activity which plays a role in consolidating memories.

No  propanolol  trials have been completed in ME/CFS  but trials in some allied disorders have. Raj et. al found that low doses of propanolol (20 mg) significantly  reduced tachycardia (rapid heart beat) and symptoms in postural tachycardia (POTS) when standing while higher doses, in some cases, made symptoms worse.

Anecdotal reports suggest that beta blockers can either work quite well or have significant side effects in CFS. Some researchers believe the side effects result from doses which are too high. They believe people with CFS should take the lowest doses possible.

From Raj et. al paper – Of more clinical importance, however, is that low doses of propranolol also significantly improved symptom burden in these patients. The clinician should be careful not to be too aggressive by targeting complete beta blockade as this may not further improve symptoms, and may paradoxically worsen some symptoms. The findings from this controlled study match our clinical experience. Many of our patients are clinically prescribed propranolol 10–20 mg per dose, and most patients tolerated this dose quite well.

Propanolol’s ability to cross the blood/brain barrier means it could be effecting either the brain and/or the circulatory system in POTS.  Raj et. al  suggest the negative outcomes from high doses of propanolol result from its impairment of  heart stroke –  which some studies suggest is low in CFS.

In an email, fatigue and pain researcher Dr. Light, suggested another reason why low doses of propanolol may be more effective than high doses.

“Theoretically, beta and alpha blockers should actually make CFS patients worse, because the prevailing theory (with some pretty good evidence) is that vascular smooth muscle alpha and beta receptors are DOWN regulated (are effectively non-functional) due to an “overdrive” of the sympathetic nervous system.

Activation of these receptors is essential for proper control of blood flow in skeletal muscles and perhaps also the brain. Without proper control, the amount of metabolites signaling fatigue and muscle pain could swing wildly, leading to the sensation of fatigue with even modest movement, and even at rest. Worse, it could lead to orthostatic hypotension (a very common symptom in CFS patients) that could cause the patient to faint when standing, or even sitting upright.

This means that low doses of propranolol (again 1/5 to 1/10 the dose that is prescribed for blood pressure control) can block the sensory receptors, reducing the total signal to the sympathetic nervous system, allowing the normal sympathetic reflexes to be re-established, leading to much more normal control of metabolite levels in muscle and brain.

(Much of this last section is still speculation-only inferred from the data we have on blood pressure and vascular control in FM patients, published in Adrenergic dysregulation and pain with and without acute beta-blockade in women with fibromyalgia and temporomandibular disorder. Light KC, Bragdon EE, Grewen KM, Brownley KA, Girdler SS, Maixner W.J Pain. 2009 May;10(5):542-52.).”