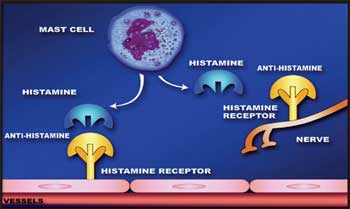 Block the histamine receptors in the brain. Besides inhibiting the allergic response they can also induce drowsiness and help some people with sleep.

Antihistamines May Help in Chronic Fatigue Syndrome (ME/CFS) Because…

By inducing drowsiness antihistamines can help some people with ME/CFS get to sleep. They provide an inexpensive, over-the-counter option to prescription sleep drugs for some patients. Most over the counter sleep aids contain antihistamines. Some researchers believe histamine production plays a role in ME/CFS and Doxepin elixir, a commonly used prescription drug for sleep in ME/CFS, is a histamine regulator.

The IACFS/ME Treatment Primer reports antihistamines such as Promethazine and Diphenhydramine (benadryl) can be helpful for sleep. Diphenhydramine is commonly found in OTC sleep drugs.   Dr. Lapp reports ‘great success’ with Excedrin PM and Tylenol PM in some patients.

The IACFS/ME Treatment recommends 10 mgs – Promethazine and 50 mgs Diphenhydramine. Diphenhydramine is found in most sleep aids. Because of tolerance issues antihistamines shouldn’t be used for sleep for more than 2 or 3 days.

Side effects might include daytime drowsiness, dry mouth, dizziness and memory problems.