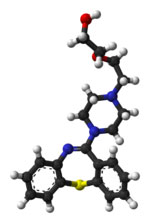 a second generation “atypical’ anti-psychotic used to treat schizophrenia, bi-polar disorder and depression. (‘Atypical anti-psychotics’  differ from typical anti-psychotics because they are less likely to cause motor control problems such as tremors, shaking or body rigidity. ) Quetiapine may seem like a strange choice for ME/CFS but it is also used off-label to treat autism, PTSD, obsessive compulsive disorder, anxiety and others or as a sedative (as in ME/CFS or fibromyalgia) to treat sleep disorders or as a pain reducer. Several second-generation anti-psychotics have been shown to enhance sleep in healthy people.

Quetiapine May Work in Chronic Fatigue Syndrome (ME/CFS) Because….

A 2012 review article proposed that the analgesic (pain reducing) and sleep enhancing properties of anti-pyschotics suggest they may prove beneficial in the treatment of fibromyalgia and chronic fatigue syndrome.  It noted that  four double-blind controlled studies, all unpublished, have examined quetiapines efficacy in fibromyalgia.

A 2007 open-label study  demonstrated significant reductions in Fibromyalgia Impact Questionnaire scores (with reductions in fatigue and stiffness but not pain) with no reductions in sleep quality or anxiety scores.

Another small 2007 open-label study found that Lyrica (pregbalin) plus quetiapine reduced pain scores on the Fibromyalgia Impact Questionnaire – suggesting that quetiapine and Lyrica may work effectively together.

The IACFS/ME primer notes this drug can cause extra-pyramidal symptom such as shaking or tremors and weight gain.