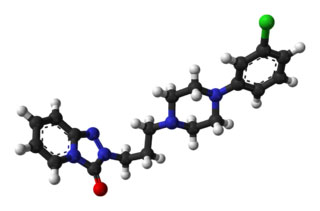 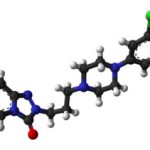 an antidepressant drug that also has anxiety relieving andhypnotic (ie sleep inducing effects). A serotonin antagonist and reuptake inhibitor, Trazodone, works by ‘antagonizing’ serotonin receptors thus reducing serotonin (also called the ‘feel-good chemical’ uptake leaving it more available in the nervous system. Serotonin is a neurotransmitter that regulates mood, sleep, appetite, muscle contraction and is most abundant in the gut and brain.

In contrast to other benzodiazepine drugs such as zolpidem which mainly increase stage 3 sleep time, Trazodone mainly increases stage 3 and 4 sleep. Like Zyrem, Trazodone appears to be able to reduce alpha wave activity in FM.

A 2011 open-label FM study found that  Trazodone had the greatest effect on sleep,  markedly improved sleep quality, sleep duration and sleep efficiency, and also had moderate effects on other symptoms such as anxiety and depression scores and pain interference with daily activities.  The authors called the improvement of sleep quality ‘striking’.

Another 2011 open-label FM study by the same group found that Trazodone plus Lyrica (pregbalin) resulted in significant improvements in morning stiffness, pain (body pain and pain severity) and anxiety

The IACFS/ME Treatment Primer  states Trazodone ‘may be the least likely to lose effectiveness’ over time in ME/CFS. Dr. Lapp reports that he has ‘excellent luck’ with Trazodone and Dr. Bell states that “Trazodone is one of my most favorite medications for sleep. “Trazodone doesn’t cause dry mouth or stimulate the appetite (no weight gain) and puts you into deep stage three or four sleep. Since it works best in the early morning hours it is a good medication for those who wake early and can’t get back to sleep. It also helps with anxiety. Men may find that it may help with erections. Dr. Bell states it should be taken ½ hour to two hours before sleep.

Dr. Bell starts at 25 mg. (taken ½-2 hours before sleep) and works his way up (50-150mg.). Dr. Lapp recommends 50 mg. Dr. Bell states it should be taken approximately one-half hour to two hours prior to going to bed. A Spanish FM study suggested that low doses can effectively enhance sleep but that higher doses are needed to effect depression and FM symptoms.

Rarely found in other Trazodone recipients, tachycardia was experienced by 32% of patients, and was the most common reason for discontinuing Trazodone in the Spanish FM study, leaving the authors to suggest that autonomic nervous system abnormalities in FM may leave some patients more susceptible to tachycardia.